0 Tributes paid to 'irreplaceable' Albert Francis MBE who has died 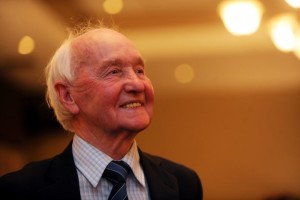 Born and bred in Dafen, Llanelli , Mr Francis served in the RAF before spending many years living in Cardiff, where he was a groundsman for both rugby and cricket at Cardiff Arms Park and Sophia Gardens.

During his time there, he was integral in bringing in the first hospitality boxes at the park together with Sir Stanley Thomas.

Mr Francis had one son, David, grandchildren Victoria and Laura, a great grandson Harley and was married to the late Sybil, and lived in Parc Tyisha in Burry Port when he returned to the area.

He was appointed MBE in 2013 for his services to charity, and served as one of the patrons of the Ray Gravell and Friends Charitable Trust - which supports causes across west Wales.

Llanelli rugby legend and member of the trust, Phil Bennett said: "A lot of people will be feeling anguish and pain after hearing this news. He was much loved by everyone.

"We have lost a great friend, an organiser, and someone who raised thousands and thousands for charity."

"I can't imagine going to the next meeting and not seeing him walking in with a smile. He was a wonderful, wonderful man."

"When I had the first phone call to tell me the news the phone did not stop ringing - I was speaking to people from all over the country - that's the respect this man had."

Spencer Davies knew Mr Francis as they were both committee members of the charitable trust, visiting the hospital every night before he died.

"He was small in stature but a giant of a man," Spencer said.

"He was a brilliant guy and I never heard him say a bad word about anyone. He was a wonderful, wonderful man."

"He was always full of joy and when I'd pick him up for meetings he would always have his hat on and his famous black book which would be full of contacts and notes."

He said: "I had the honour of winning the junior sports personality of the year at a ceremony in Cardiff for my achievements in squash when I younger and when I was there I was like a lost lamb.

"He put his arm around me and said right, as long as you don't tell anybody, I'm from Llanelli and I'm going to look after you. We were the best of friends after that. My wife and I were with him as he passed away on Monday night."

"Nobody will ever know how much money Albert raised for charity, but I promise you, it's in the millions. He was an unassuming, humble man who everyone loved."

"I have spoken to the likes of Sir Steve Redgrave, Sir Stanley Thomas, Sir Ian Botham, Ryan Giggs, Mark Hughes and Nicky Piper to tell them the news since he passed away."

"In 38 years I have never heard one person say a bad word, not one remotely bad word about him, and you can't say that about many people.

"The word legend is used too often but it is certainly the case when you talk about Albert."

You can read the full article from Wales Online HERE