1 TTS celebrates new projects – both home and away.... 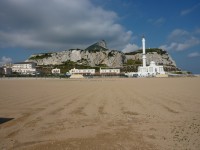 This year, it's not just the England cricket team who are spending a good proportion of their time as 'tourists' - specialist sports surface consultancy Total Turf Solutions (TTS) is celebrating having been appointed a number of key contracts - both at home and abroad.

With the team's flagship schemes at Malahide CC in Dublin and Moara Vlasiei in Romania, both part-funded by the ICC's (International Cricket Council) European Development Programme, now nearing completion, the TTS team has embarked on a series of exciting new projects.

Lead consultant, Dr Andy McLeod, has recently returned from Gibraltar where he undertook a feasibility study on behalf of the Gibraltar Cricket Board; once again recommended by ICC Europe. TTS was appointed to undertake an in-depth study into the existing cricket facilities at Gibraltar's Europa Ground, which the board is looking to upgrade.

Presently comprising of a non-turf match pitch and a Nortex (Dolomite Limestone) outfield, Andy's role was to assess the ground and provide recommendations as to the best solution for bringing the facilities bang up to date. In addition to recommending the mix, construction and specification of new facilities, Andy identified a number of issues specific to this unique project; including the transport/import of materials into Gibraltar, the provision of natural turf playing surfaces and combating the salty spray that is blown off of the Med.

Closer to home, the TTS team has been working on projects that span a broad range of sports at varying levels. At St Mary's School, Menston, the secondary drainage system for both of the sports fields has just had installed, as it has at Corby Town FC's new natural stadium pitch. TTS has undertaken feasibility studies and prepared contractor tender documents for a new 3G football pitch and mini-pitch on behalf of Galway City Council, in addition to two ECB (English Cricket Board) ground improvement projects at Hawarden Park CC & Great Harwood CC.

The team has also been appointed to complete the Feasibility Study on a proposed new multi-sports site for Crick FC in Northants and, when not busy on site, Technical Consultant Alan Lewis has been lecturing during the latest round of training for ECB Pitch Advisors at Sandford CC in Devon and at the first new-style Racecourse Foundation Level course at Cheltenham Racecourse for the IOG/RCA.


For full information on the diverse range services offered by TTS, visit www.totalturfsolutions.co.uk

Image Caption: TTS has recently undertaken a feasibility study into ground improvements at Gibraltar's Europa Ground, among a host of other projects.