0 TurfBreeze Fans Create an Air of Confidence at Wembley Stadium 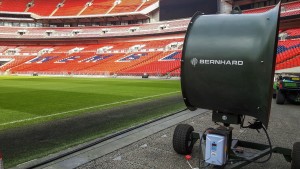 The installation of eight TurfBreeze fans at Wembley has allowed FA Head of Grounds and Estates, Alan Ferguson, to seize control of the stadium's micro-climate and reduce the risk of turf disease by almost 58%.

Supplied by Bernhard and Company, the fans form part of a one-million-pound investment program to upgrade pitch support equipment, which also includes the addition of SGL grow lights, and replacing the existing aeration equipment with a SubAir System, another Bernhard and Company product.

Alan explains the challenges he and his team face and how TurfBreeze fans have already shown their worth during a four-day turn-around between Billy Joel and Tottenham v Monaco in the Champions League in September.

"Wembley has one of the deepest bowls in European and world football. This in turn has created a harsh and difficult micro climate to manage," Alan begins.

"The air flow at pitch level is poor, before we started using the fans it would be difficult to keep moisture off the sward in the morning, preventing us from cutting. But now once we've cut on a match day we can irrigate to aid ball movement during the game.

"The reduction in dew means the leaf is drier, making it healthier having removed the moisture that acts as a vehicle for the spores. That has lowered the risk of disease by as much as 58%. We've seen a reduction in disease occurrence already, which is a real boost for us as we look to produce a stronger plant in a healthier sward.

"The even temperature in warm months also allows us to manage and reduce the heat stress on the leaf, which is invaluable as the temperature can reach 40 degrees centigrade at pitch level during the summer.

"The fans made an enormous difference in the time between the concert and the match because we were able to have a consistent surface temperature on the pitch for the first time. For me it's occasions like that when we're up against a tight deadline that the fans really show their worth, and give us confidence.

"By being able to manage the sward temperature below the ground with SubAir and above with TurfBreeze fans means we can finally manage an optimum temperature at the leaf, giving it every chance to recover quickly, ready for the next event."

Alan considers innovation to be one of the most important aspects of his job. Like most groundsmen in multi event stadia the pressure he faces means he has to use the latest techniques available to meet demand.

By his own admission the Wembley turf is now grown almost completely artificially all year round, with the use of grow lights, TurfBreeze Fans and SubAir. Having to take this approach means the equipment has to be of the highest quality, because you only get one chance to grow a pitch in.

"The pressure is on groundsmen to replace the natural elements required by the grass plant and produce quality pitches. Many do this by using grow lights, but now with the fans and SubAir there is also an opportunity to replace the air flow, as well as ensuring the sward is well oxygenated.

"Every game we host is a high-profile event. With today's HD television technology and cameras covering every angle there is no hiding place. Meeting these turn-around times is vital, as is providing the best surface possible in order to meet client expectations.

"As a team we don't want people to look at the pitch and say 'that looks good considering how much they've had on it,' we want them to view it as one of the best surfaces in world sport. TurfBreeze fans are already playing a part in making that happen."