0 Turning over a new leaf at The Hertsmere

A course borne out of the golf boom in the early 80s has a new name and new image after something of a decline under previous ownership. Neville Johnson went there to hear about plans for a dramatic turn-around from head greenkeeper Matthew Ephgrave, and what is already under way. 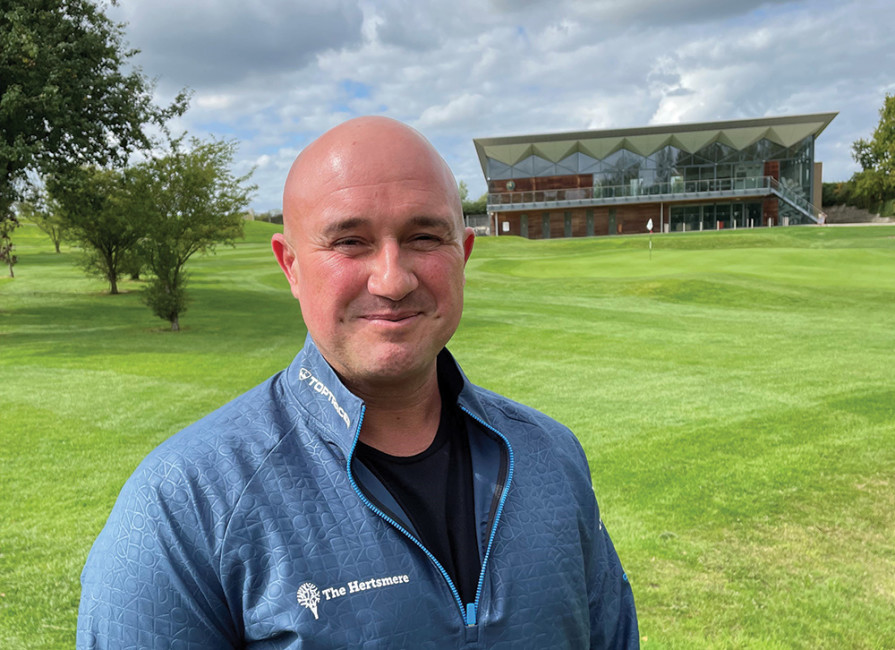 After weeks of drought, this parkland course looks remarkably lush and welcoming in the Club Car ride to the tucked-away greenkeeping HQ. Golf was first played here in 1984 and its appearance now owes much to a re-design two years later by renowned architect Donald Steel. Eighteen holes over 6419 yards from the men's tees were created as a gently undulating par 72 challenge for all abilities.

Until 18 months ago, this was Radlett Park Golf Club, and before that Elstree Golf Club, both private member clubs. New owners took over early last year and signaled their intent to develop a type of golf centre not at all like a traditional club, by coming up with a new name - The Hertsmere - after the local county borough.

It's already a flourishing pay and play centre, which also offers society and corporate golf days. Non-playing attractions include a network of countryside walking trails, and clubhouse balcony refreshment and dining overlooking the course. The plan is to keep it very much pay and play, but introduce limited membership for golfers wishing to play regularly.

The 180-acre site had been Hertfordshire farmland before its conversion to golf. London clay, a base for many an outer London and Home Counties course, is literally an underlying reason for course difficulties and much of what's happening and about to happen here. 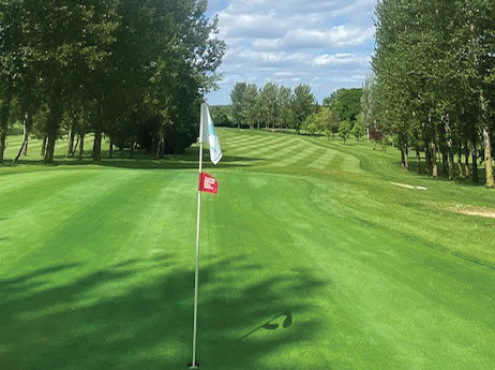 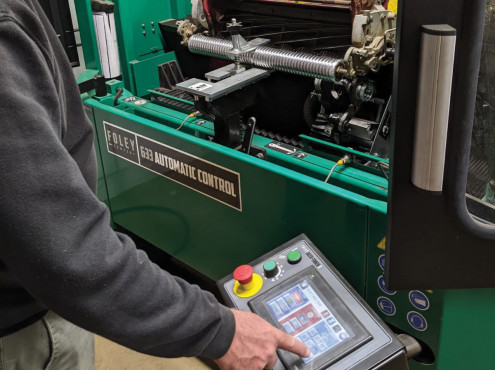 Matt Ephgrave has worked on the course for 25 years, man and boy. He took over as head greenkeeper seven years ago. The way things have been managed in the last 18 months or so has bought a new lease of life to golf at the course and this is reflected in Matt's own feelings about his role. He has seen good times and bad. His telling words summarise the changes afoot:

"My love and desire for the job has really come back in the last couple of years, after some tough times here," he says.

The new owners and management set out to break all ties with the previous set-up, which had a declining reputation as a provider of decent, value for money golf. The new owners' declared intent was for The Hertsmere not to be thought of as a club or indeed referred to as one.

The long-term vision, the interest in future planning, and the investment have altogether changed things here. Everything has been re-invigorated, it seems. The turn around is incomplete, but well under way.

There is a fresh approach, especially in the encouragement of younger players and attracting novices to the game. The driving range, the coaching facilities and the proposed new academy course are key ingredients. Links with local schools and summer camps, introducing golf as a worthy sport, are already in place and part of this modernisation. Only the day before, a party of pupils from nearby Haberdashers School had visited The Hertsmere to get a taste of its facilities.

There had been a driving range at the Radlett Club, but it had become neglected and pretty much shut down. It was really just an empty shell, a redundant facility. Since the birth of The Hertsmere, over £300,000 has been invested in a massive upgrade of this with state of the art technology. The fully refurbished, 26 bay Toptracer range offers an interactive experience to golfers, whilst drinks and light snacks are even available to each of the bays by touch screen order to an on-site food shack.

Golfers at The Hertsmere also get the opportunity to experience a 30-minute assessment of stance and golf swing by one of its professional coaches who will suggest an appropriate programme to achieve improvement.

Suitable for any golfers at any level is a computerised simulator that enables play and shot assessment on some of the world's elite courses, including St Andrews and Real Club Valderama. This provides a real game feel and helps golfers analyse their swing and general play. It also means a game of golf can be enjoyed when the weather makes it unpleasant outside.

The new simulator is part of a number of new facilities recently opened, including a new Srixon Centre of Excellence and custom ball and club fitting facility.

This is all part of The Hertsmere's aim of creating a total golf experience and education accessible to everyone, regardless of budget or ability. 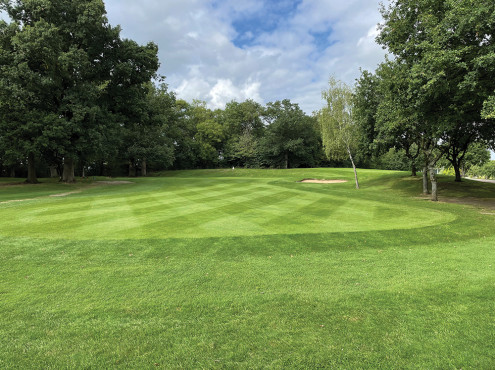 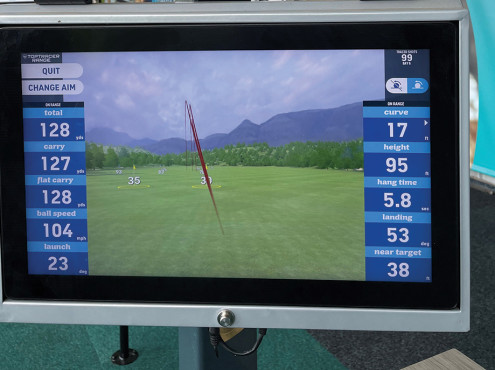 The approach to the 4th hole

The impressive looking clubhouse is also undergoing a significant indoor refurbishment, upgrading its refreshment and dining facilities, which should be completed in January.

For the parkland course itself, though delightful in appearance and setting, the problems that have built up in the past will take longer to redress. Things are well under way though and momentum is gathering.

There is an abundance of trees, many of them planted after the re-design in 1986. Some, notably poplars, have added to the already inherent problems of a golf course built on London clay, causing damage to drainage channels. The lifespan of poplars is only about forty years, so many of them are close to that and removal would be timely and sensible.

In the past, there had been unfavourable comments from golfers about how such an otherwise beautiful course could so regularly be muddy and unplayable in very wet conditions. Matt had grown to accept this and that closure was an inevitable outcome over the winter months, an irksome disappointment to golfers and a dent in income to the Radlett Club. It was frustrating that there was no investment to tackle the issue. However unsatisfactory, it was just how things were.

The London clay meant that conditions would, year after year, produce winter waterlogging, so bad that you struggle to walk up some of the fairways, let alone play shots. The converse, and a slight benefit of London clay, is that it holds moisture in summer, which in unexceptional years - unlike 2022 - helps keep things green.

Matt uses verti-draining, calling in contractors A T Bone, to control drainage as much as he can, but the plan going forward is to install a new system for the front nine and remove some of the unhelpful trees. He has called upon the expertise of R&A agronomist Gordon Howat for a precise opinion, so that a practical plan can be put into action soonest. Matt knows he can now count on the financial backing of management for this and his enthusiasm is palpable.

"All year round playability is a prospect at last. No more dispiriting closures for as long as three months," he says.

Gordon Howat has been to the course a number of times in recent months and will continue to do so to extend his investigations.

Closure for the renovation work likely next year is inevitable, of course, but Matt is sure everyone will accept that as a small price worth paying. Drainage is the number one issue and it has to be put right.

Irrigation, the other bête noire, relies on a system installed in the late 1980s and very much needs updating. There are a lot of repairs along the length of it. Only now, in mid-September, do the fairways offer a consistently verdant appearance, and this year with extended drought and record temperatures, the contrast has been more marked than ever. Matt says he is delighted how well it has bounced back from the effects of such an arid summer. 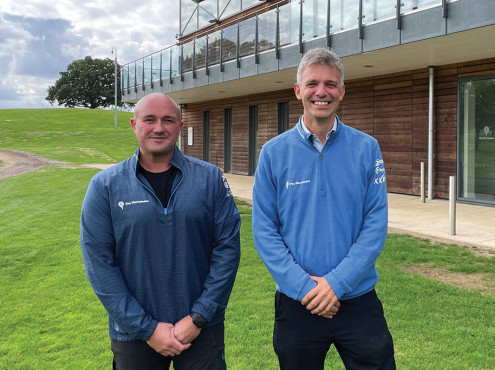 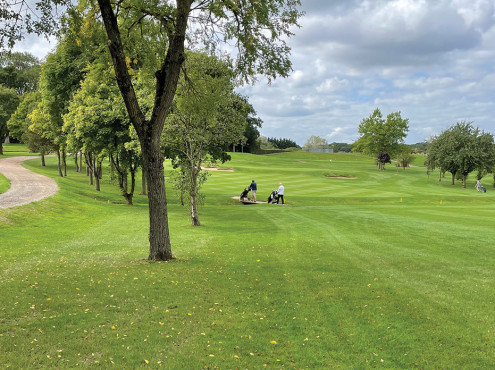 The irrigation issues in summer are nowhere near as harmful as winter waterlogging. At least in dry times, Matt and his team are able to do something about the really dry stretches by hand watering if need be. Upgrading the irrigation system is, however, on Matt's shopping list and The Hertsmere management is looking seriously at a wider sustainability programme, which will probably include rainwater storage and reservoir construction.

Currently, irrigation is mains sourced, which is sure to grow in cost terms, and as there is no chance of new boreholes locally, rainwater harvesting is a good option and this is being seriously explored. This summer, some of the fairways actually cracked open because of the drought.

"We are in early stages of becoming Golf Environmental Organisation (GEO) certified, and sustainability is becoming a big part of The Hertsmere's forward thinking," says Matt.

The big frustration for Matt is that it is such a lovely course and plays beautifully in decent conditions. The hope - and expectation - is that this will be the final 'winter of discontent'. The already hugely popular 26-bay driving range and associated coaching facilities will be a saving grace in terms of income.

"The course improvement project is a huge one, but I'm very confident it will happen, and quite soon," says Matt.

September overseeding of the greens

Also in planning is a 12-hole academy course, with two loops of six, designed by architect Tom McKenzie. Any water harvesting facilties will likely as not mean some amendments will have to be made to the main course too.

Matt knows The Hertsmere course like the back of his hand. He heads up a team of six in all, with Barry Stone his assistant, three greenkeepers, and an apprentice. Barry has worked at seven previous courses including Harbour Town in South Carolina, USA and the Trump International Golf Links, Aberdeen. His experience is invaluable to Matt.

The Hertsmere owns all of its greenkeeping equipment. Matt says the new ownership has been extremely supportive since it took over at the beginning of last year, spending over £50,000 on two new Foley blade grinders, over £70,000 on a rough mower and adding a new utility vehicle.

"The support from the management has been incredible when it comes to our machinery requirements. They listen to our needs and have delivered every time," says Matt.

"The management are also big on staff training and development, which is refreshing and good for individuals and the business."

Matt does call in outside help if needed, and in September for the first time all the greens were overseeded. Their grass cover, although 90 per cent Poa, has never actually been a problem, but as part of the long term upgrading, there is a big effort to introduce better disease tolerant species to aid play. Johnsons Pure Browntop Bent was introduced by contractor Turf Tonics.

Matt has his fingers crossed for a cold dry winter, which cuts waterlogging and minimises turf disease. For the time being, excessive rain is bad news commercially at the Hertsmere, but not for much longer.

The Hertsmere's General Manager, Jonathan Gray puts its mission statement into words: "Having further developed our beautiful golf course and spectacular driving range, and with the clubhouse refurbishment plans in place, we believe that we are progressively offering some of the best facilities in the area."

"This, alongside the creation of a golf academy that is ground-breaking in its approach to coaching, means the foundations are laid, as we progress our plans to become the home of family golf in Hertfordshire and north west London."

The Hertsmere is fast becoming one of the most accessible, welcoming and exciting golf courses in this area. Google reviews of the course have been exceptional since the transition. There are exciting times ahead for golfers and greenkeepers here.