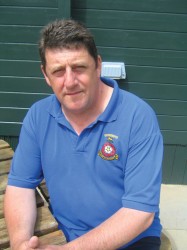 Mark Openshaw - told to give up greenkeeping - thirty-four years later and he's still doing it!

Who's your hero and why? I don't really have a hero but, in my work life, Jack McMillan and Brian Turner are people I've looked up to and respected very much.

What is your dream holiday? A world cruise.

What annoys you the most? Ignorant drivers.

What would you change about yourself? Have more patience.

Favourite record, and why? I have so many records that I like, but most Red Hot Chili Peppers songs, I love their blend of funk/rock.

Who would you choose to spend a romantic evening with? My wife, she's a fantastic person and very good fun.

If you won the lottery, what is the first thing you would do? Pay off all my family's mortgages then have a massive party for a couple of weeks!!

If you were to describe yourself as a musical instrument, what would you be and why? Some people would say a guitar, because I'm highly strung!

What's the best advice you have ever been given? Give up greenkeeping!! I'm still doing it though, thirty-four years later!

What's your favourite smell? Being a greedy so and so, it would have to be the smell of Sunday roast cooking.

What do you do in your spare time? Spend time with my wife and family, watch as much sport as I can and dream about being rich!

What's the daftest work related question you have ever been asked? So many in thirty-four years, but a couple of years ago a golfer was baffled as to why the fairways were so dry and brown, bearing in mind it was in a hot spell with temps up to 30ºC, no rain had fallen and we had no irrigation at the time - it seemed a pretty daft question!

What three words would you use to describe yourself? Kind, fair, loyal.

What talent would you like to have? To be able to play the guitar to a high level.

What makes you angry? Bullshitters, liars and two faced people.

What law/legislation would you like to see introduced? Outlaw bullshitters, liars and two faced people!!