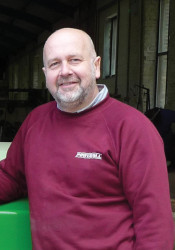 Trevor Luckhurst - he's even grumpy about 'Grumpy Old Men' not being made anymore!

Who are you? Trevor Luckhurst, director, and general dogs body at Poweroll.

Who's your hero and why? Sir Winston Churchill - what a fulfilling life he had, the army, politics, nobel prize winner for literature, re-elected prime minister at 80 years old. A (flawed) genius really.

What is your dream holiday? Time spent relaxing - it's such a rare occurrence these days.

What annoys you the most? Where do I begin? But, up there, is our education system, youngsters with no academic interests or desires, not having the opportunity to learn hands on practical skills at school age, as I did. Skills that could get them through life and introduce them to life changing opportunities. Instead, they leave school disliking all education, and have no inspirations or aspirations.

What would you change about yourself? Where do I start?

Who wouldn't you like to be? A youngster starting out in life now.

Favourite record, and why? I like most genres of music, except rap, (probably an age thing), but to choose one record above all others would be impossible.

Who would you choose to spend a romantic evening with? Unfortunately, for my wife, I'm not really the romantic sort. But, if forced into a corner with someone, Rachel Weisz is a real looker.

If you won the lottery, what is the first thing you would do? Smile and shout yippee!

If you were to describe yourself as a musical instrument, what would you be and why? A piano, it's so versatile; it can lead, accompany, have compositions created on it.

What's the best advice you have ever been given? Move your fingers - the door's closing.

What do you do in your spare time? What's spare time? The little I do have goes on motorcycles, locomotives - full size and models. I have a touring caravan, but rarely use it.

What's the daftest work related question you have ever been asked? I don't think there is any such thing as a daft question - if someone wants to know an answer to something, that's fair enough, - mind you - there's a lot of daft people about.

What's your favourite piece of kit? A knife and fork.

What three words would you use to describe yourself? Hardworking, traditionalist, boring.

What makes you angry? Don't get me started - though I find myself pretty much totally agreeing with similar aged chaps on the BBC's 'Grumpy Old Men' programme - and why has that programme finished anyway - it was brilliant!

What law/legislation would you like to see introduced? I think there are already too many laws, - common sense isn't allowed to prevail anymore.