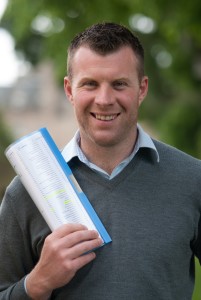 Castle Stuart Golf Links sit on the picturesque Scottish coastline near Inverness. Venue in both 2012 and 2013 to the Scottish Open, it is a relatively new course with a growing reputation for world class facilities and the expertise of their greenkeeping team.

Together with its equally prestigious neighbouring establishment, the renowned Carnegie Club at Skibo Castle near Dornoch, they have jointly purchased a deep aerator for their combined fleet.

Course Manager at Castle Stuart, Chris Haspell, instinctively went for the Wiedenmann Terra Spike XD8. The XD 8 at 2.1m wide has a tining depth of 275 mm and is the most efficient of Wiedenmann's range of ten aerators.

"Basically I was after its productivity. We've got over 19 hectares of fairways plus the driving range so we've a lot to do," says Chris Haspell.
"Same here," says Gary Gruber, Course Manager at The Carnegie Club. "We took delivery and put it to work straight away.

We effectively did our whole golf course in four to five weeks. Working it out, with the enhanced speed and the increased width we've been able to do all the areas we historically did three times quicker. We're finding it can do two fairways a day when before we couldn't even get close to getting one fairway done."

At Castle Stuart the Wiedenmann machine has also cut a substantial number of days from their aeration run. "When you are dealing with the vagaries of the climate up here you want aeration done quickly. It's hugely important to take the opportunity to get out and get on with it. Any days saved make a significant difference to us."

Now named regularly in the World's top 100 courses, Castle Stuart is a fairly unusual links course as it has an east coast situation yet a westerly aspect. Its proximity to Inverness airport at just two miles, means it attracts destination golfers from all over and so greenkeeping duties cannot be invasive.

"For such a big machine the XD 8 runs very smoothly. In the past some of the older style industry aerators used to clank and bang. This is so quiet; if you get it running at the right revs you hardly notice it is beside you which means that we're not disturbing visitors.

"The other big plus is the finish is first rate. I am delighted with the quality as it's so clean and I was surprised how good a job it leaves once it's been over. We're using it on fairways at the moment and soon we'll get round to tees.

It's perfectly clean and hardly affects the playing surface so it's great," continues Chris Haspell. "As a joint purchase with Skibo Castle; it is easy to share. The season here runs from March to about the end of November.

Skibo being a members' course traditionally start their aeration works before us in September / October, so there's no conflict."

Confirming that the joint arrangement works equally well for the Carnegie Links, Gary Gruber says his team is already well ahead in its preparations. Compared with this time last year, he finds himself at least two if not three full months ahead in terms of aeration.

"We're about to get it back for our second shot," says Gary Gruber. "We finished our first spell at the end of October. Historically it may have taken us until February to do the same run because of the stop start nature of the weather. 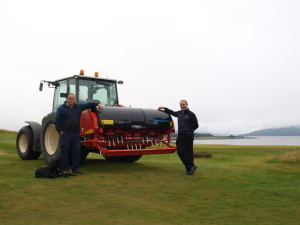 what the weather brought.

In effect the tractor was sitting in anticipation, tied up. It makes a considerable difference to start a piece of work and get it finished within a short space of time and get the tractor back for other duties.

Couple the increased productivity with an improved quality of finish and operator comfort, the XD 8 has made a significant difference to our off season renovation works."

Fairways GM's Northern Area Sales Manager, John Morton, says: "Often sharing a key machine can be a very sensible and practical option. This is a perfect example of how the arrangement can work to everybody's benefit."