by Rosie Duckworth
in Golf, Machinery & Mechanics, and Industry News
on 21 Mar 2016 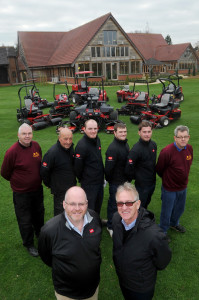 Spanning over 150 acres of landscaped golf and leisure grounds, the Cambridgeshire estate comprises a community of luxury holiday homes set around an 18-hole, par 70 golf course.

Adrian, who also designed the course back in 1996, explains why he opted for a lease over buying new machines outright: "We chose to renew our lease so that we're able to free up capital and continue investing into the site's other areas.

"We've recently opened a brand new £2m leisure complex and we've invested in the infrastructure of another 150 holiday homes, so the lease option works fantastically well for us."

The new operating lease has been agreed with Toro distributors Lely UK, alongside a service contract supplied by Norfolk-based R & B Turf & Groundcare.

Aside from financial benefits, Adrian also says being impressed with both the Lely and R & B Turf & Groundcare teams was another reason for renewing.

"We had an operating lease with Toro for five years prior to this renewal agreement and were really happy with the support and advice we received from the guys at Lely, in particular Julian Copping, Jeff Anguige and Larry Pearman," he says.

"Similarly, we were impressed by R & B's work. As they did such a great job servicing the machines that after the lease was up, we bought them all. We see great value in the 6-10 years of a mower when they're kept in good shape with a full maintenance package," adds Adrian.

As well as buying all of the previously leased machines, the new lease agreement has seen the club welcome the arrival of two new Toro Greensmaster 3250-Ds, one Reelmaster 6700-D, one Reelmaster 3100-D and one Groundsmaster 4500-D.

Head greenkeeper Kevin Goude - the man behind the club's immaculately kept greens, tees and fairways - says he's particularly impressed with the new Groundsmaster 4500-D: "As well as noticing exceptional cutting quality, it's made a substantial difference in terms of productivity. Because we can now mow more in less time, we're really putting our man hours to best use."

With a 2.7m width of cut, the Groundsmaster 4500-D allows users to mow up to 7.6 acres per hour, offering a huge boost in productivity.

Adrian, also impressed with Toro's performance, explains more about his brand of choice: "We chose to stick with Toro because of their reliability and almost zero-hours downtime, which translates into the best use of our staff's time and saves money. We used a different brand previously and experienced lots of downtime. If you're a mower down, and can't get around the course in time for play, not only do you increase costs and man hours, but players notice; the speed of the ball can really be affected.

"We run a lot of golfing events and have 100,000 people visit us annually, with around half of those being for golf, so there are lots of people to satisfy! With Toro, our players always say the course looks well-maintained and plays well. We're also seen to the players as investing in the best that money can buy; Toro is like the Rolls-Royce of mowers," he adds.