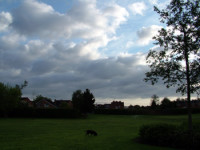 This Year (2013) is likely to be one of the warmest on record with global temperatures 0.57 degrees above the long-term average, Britain's Met Office said in its annual year-ahead forecast.

The forecast is based on Met Office research, as well as data from the University of East Anglia, the NASA Goddard Institute of Space Studies and the US National Oceanic and Atmospheric Administration.

Rising temperatures could be due to the natural variability of the climate and global warming from increasing greenhouse gas emissions, said Dave Britton, a Met Office forecaster.

A warmer global average temperature does not necessarily mean every region of the world will get hotter, as regional climate variability produces different effects in different parts of the world, he added.

Eleven of the 12 hottest years on record have occurred since 2001, according to data from the World Meteorological Organisation.

See the rest of the artixle on the following link:- Euractiv.com