0 Versatile collector on course for success 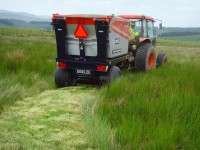 Stowmarket Golf Club recently took delivery of a new Trilo SG400 vacuum collector with optional Scarifier, and Head Greenkeeper Matt Gill has already used it to great effect. He says: "It's early days, but I have been extremely impressed with the machine so far."

The parkland course in rural Suffolk features many mature trees, so leaf clearance is a vital task to keep the club spick and span. "We use the wander hose to clear leaves around the course, clubhouse and car parks, and it's very manoeuvrable and easy to operate," he comments.

The Trilo has also proved to be an extremely efficient Scarifier, "We've already scarified seven fairways, and I'm really happy with the results," says Matt. Changing from flail collecting to scarification is a simple matter of altering the gearing and swapping the 1.5m heads.

The SG400, which has a high tip hopper with a capacity of 4cu.m, is actually doing the work of two machines having replaced a flail collector and a Scarifier. "Previously we had to clear up after the old machine, but the clean, effective collection system of the Trilo means that it can be done in one pass and by one man." Matt commented. He also believes that its versatility means it can do even more jobs, he went on, "We also plan to use it to cut and collect long rough on an annual basis, which our previous machines couldn't do, so we'll get even more out of the SG400!"

When it came to purchasing a vacuum collector Matt also considered other machines on the market, but comments that they did not compare with the Trilo in terms of build quality. "I also spoke to other greenkeepers who use the Trilo and they confirmed that it is the best," he says. "Durability was an important factor in the purchase decision and it has been costed out over three years.

However, other clubs that I've spoken to say they have kept Trilo vacuum collectors for nine or 10 years; and even then they can be refurbished to give even longer service. It really is a well built machine that needs little maintenance and is very easy to look after."

Local dealer Tomlinson's supplied the SG400, and Matt says that he has had excellent support both from them and from the Trilo distributor The Grass Group.
Ends