0 Versatility is the key at Sitwell park

Sitwell Park Golf Club in Rotherham has taken delivery of a Ventrac 4500 compact tractor and two attachments from Russell Group's Groundcare Division. And the key reason for the purchase was its versatility according to Course Manager Martin Hayward. 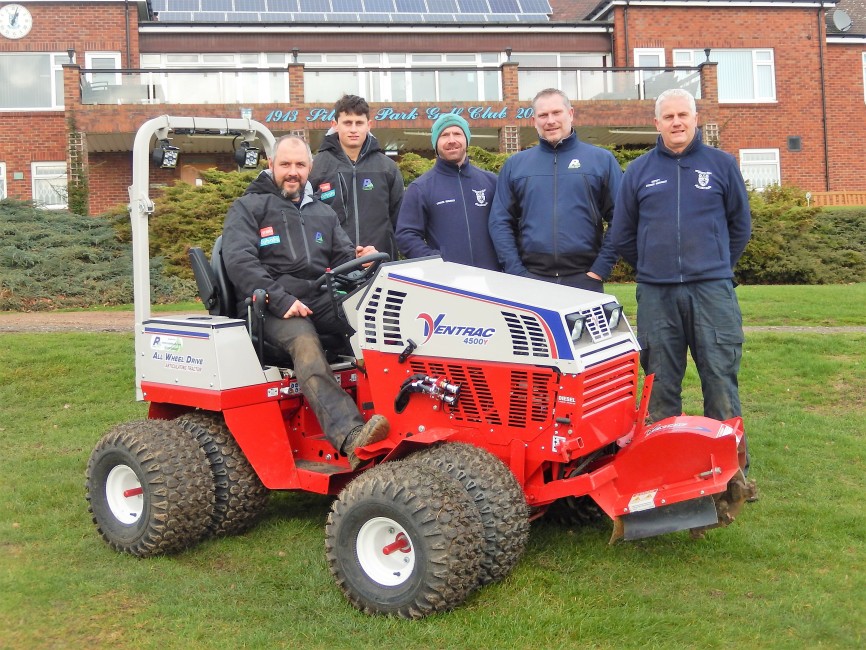 "It's an incredible machine," he said, "so versatile and it can do what other machines can't do. We've purchased it with a Contour deck and a blower, which basically means we have two machines in one; three if you count the stump grinder attachment we have on loan from Russells.

"We're a parkland course situated in a valley with some severe undulations, so maintaining some of the slopes are an issue. Previously we've used strimmers in these high maintenance areas, but with a small team it takes a lot of man-hours and anything we can do to reduce that drain on resource is good and the Ventrac does just that."

Sitwell Park Golf Club opened in 1913 with the support from local landowner, Sir George Sitwell, who offered part of his estate and agreed to bear the cost of building the course providing that a minimum of 100 members could be guaranteed by the time nine temporary holes were built. The club was a great success with over 100 members enrolling within a week and in May 1913 the club formally opened with over 200 members. With open countryside to the North, South and East, this was the first course Dr Alister MacKenzie built for a private client rather than for a committee.

Martin Hayward is a career greenkeeper, who has worked in Yorkshire for over 22 years. He entered the profession at Town Moor in Doncaster, moved on to Bawtry Golf Club after seven years and then to Hessle Golf Club. He joined Sitwell Park as Course Manager in April 2018 and leads a team of four dedicated greenkeepers.

"When I came here I identified a problem with shade on some of the greens, the 5th having the biggest issue, so we're currently working on a programme of extensive tree removal to allow more light and increase airflow into these areas. Glen Sawyer at Russell's kindly loaned us the stump grinder attachment and it has certainly impressed the lads. The Ventrac is certified to work on slopes up to 30 degrees and this has enabled us to get into areas that were previously not maintained. This will certainly help with the presentation of the course and I've already had positive comments from some of the members.

"I'm very lucky here having a supportive committee who have agreed to a planned replacement programme for our equipment. When we were looking at the Ventrac, all of my team were part of the decision-making process. To a man, they were all impressed and then it was just about making a business case for the committee to agree. It wasn't that difficult as they quickly saw the versatility of the machine and how, in the long-term, we can add attachments at a fraction of the cost of buying a dedicated machine."