Situated amongst the rolling hills and valleys of Bridgnorth, Staffs, Enville Cricket Club has hosted games since 1821. As they celebrated their 200th anniversary, Kerry Haywood met with groundsman Paul Clarke to discuss the vast achievements of the club and how he maintains the pitches around his full-time postman position. 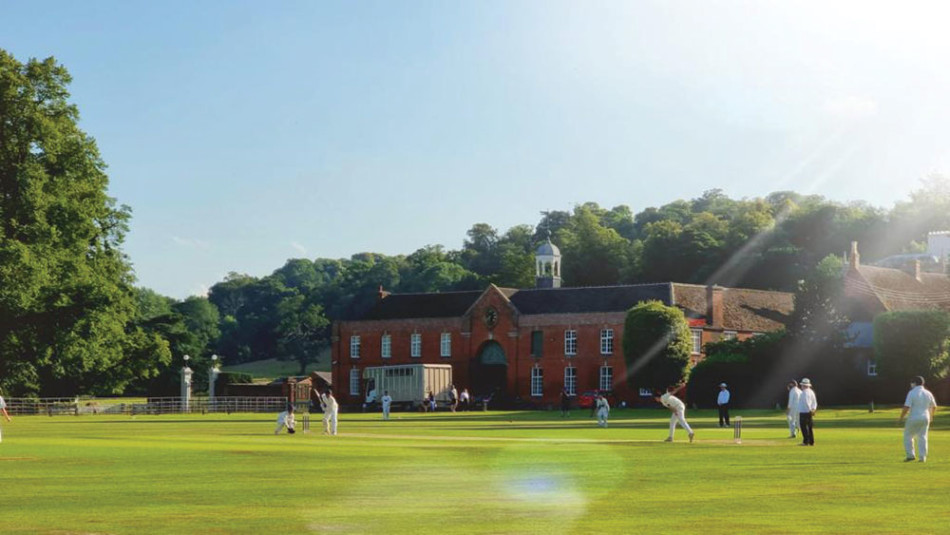 Enville Cricket Club lies within the estate of Enville, which extends to some 6,500 acres of spectacular countryside surrounding the pretty village of Enville itself. Chairman Trevor Spears describes it as more than just a cricket club. "The word family is often used to encapsulate our pride in feeling part of something bigger with strong bonds, which means we work together through good times and bad."

As the club celebrated it's 200th anniversary, with a week-long programme of games and celebrations, Trevor added: "Enville's illustrious history includes links to royalty, being a prestigious cricket venue in the Victorian era and serving as a wartime hospital for injured American soldiers. As the current custodians of the club, we will create our moment of history to be remembered with fondness and pride by future generations."

"During the pandemic, when there were very real concerns the club would not see two hundred years, our Enville family stood together and fund raised like never before. I remember my feelings when completing my last mile of the Covid-50 walk and the sense of pride and admiration in our family. My sense of privilege at being the head of such a wonderful club became quite overwhelming. Five members pushed themselves to the limit in completing all fifty miles and more than forty members took part in various roles. This is something I feel is one the biggest achievements in our two hundred years. Family, pride, togetherness, support, development and success are all positive values at the core of our club, which ensure it is in safe hands as we enter our third century." 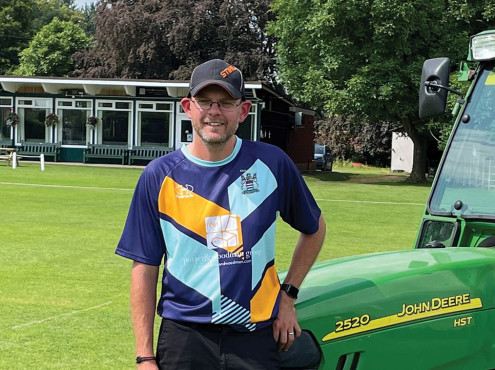 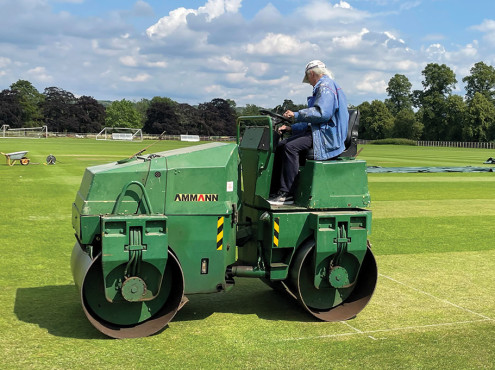 Part-time groundsman Paul Clarke (38) is in charge of achieving the high standards expected from a club with such an exciting and bold history and describes how his days pan out. "My full-time job as a postman means I average around seven/eight miles walking in the morning and then come straight to the club for a few hours every afternoon. It's just me that looks after the ground, but I might get a couple of volunteers offering help a few hours a week with rolling or cutting the outfields etc."

"I get paid minimum wage, which just about covers my fuel, but it's not about that for me. I used to play cricket here and I first started helping out nine years ago (after taking voluntary redundancy as a civil servant). I took the position as a postman and the club recognised I had a bit of spare time so I offered them six hours a week to undertake basic work and do what I could. That gradually increased and I now work around twenty hours per week in the summer."

"Gradually, as the ground has improved, so has the interest and the number of teams at the club. We now have the 1st and 2nd teams plus junior games, County girls under 11's and under 13's, as well as County boys for Worcester - which can amount to five games per week."

Unusually, the site also hosts Enville Athletic FC, who control their own budget and everything that happens on the football side. "There are discussions each year about how the outfield is handed over to them for their season and then handed back. After the full-size pitch and the junior pitch have been used throughout winter it's always a challenge, but fortunately, this year (due to grants surrounding Covid), we were able to put £3500 into the outfield in March which has made a huge difference. We reseeded, fertilised and applied weed killer and the club has seen the benefits and results of how this injection has made the club look aesthetically - which will hopefully continue. There was, at one time, reference to our cricket club being the finest in the world, even above Lords, so we have a lot to live up to."

"The slope here is almost identical to Lords, which is quite a challenge when there is only one of you and you're trying not to flood the square. I learnt that the hard way in my first season here, when I flooded the first team pitch just before their Saturday game."

"We have a total of sixteen wickets and watering is always a challenge because of the slope. Ten days before a game, I will cut at 9mm with the Lloyds Paladin or the Ransomes Super Certes and water heavily, then cover the squares if the temperatures are going to be high. Following this, I continually brush and roll with the Arman Road Roller and then cut down to 6mm the day before the game and carry out final prep and marking. The outfield is cut at 14mm, two to three times a week depending on the weather, with the Jacobsen TR3 cylinder mower. At the end of the season, renovations include 3-way scarification, an application of Limagrain MM50, topdress with K loam and an autumn/winter fertiliser application." 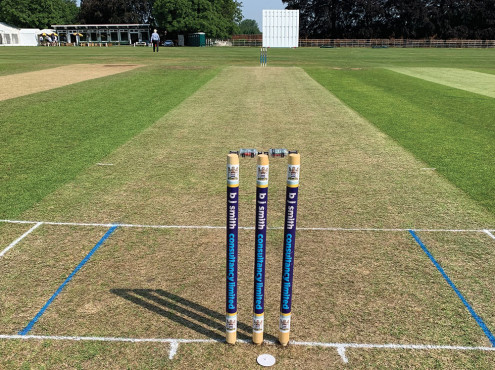 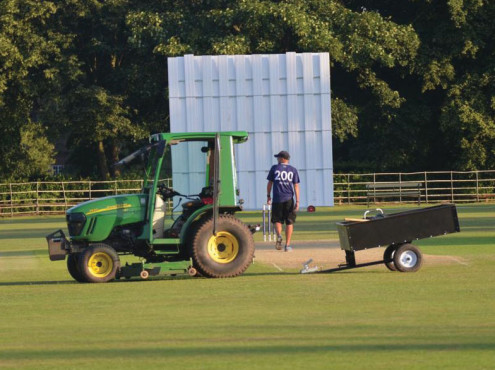 "Seed was one of the first things I changed when I first started here. The average score was low; you could win a game with 120 and there was low bounce due to the amount of sand below the surface. I came in during April, after the County pitch advisor had attended, and he strongly suggested we need to improve the surface. At the end of the next three seasons, I soaked the squares, Verti-Drained and applied the loam and it's improved greatly over the last few years - now you need a score of 250 to be in the game! It's not perfect, it never will be without a full-time groundsman, but I'm proud of it and the club are happy."

"I managed to pick up a SISIS Combirake for £50 off eBay and that has been a godsend. Two years ago, we were fortunate to get a grant to buy the John Deere 2520 tractor which makes moving the covers a lot easier and, last year, I was able to Verti-Drain the whole field four times which cricketers have noticed the difference after heavy rainfall. My wish list would include new mowers for the wickets and squares as the ones we have now do a great job, but they are twenty years old."

Paul has become pretty handy over the years and undertakes the oil changes, servicing, filter changes etc himself. Anything too technical or the sharpening of blades gets done externally.

Estate owner, Peter Williams, has a team who maintain all the trees and anything outside of the grounds boundary. "Over the years, I have got to know Peter's team well and we communicate regularly about everything that is going on across the estate. Essentially, the cricket ground is their front garden and I take pride in it looking pristine for Peter and the general public who walk the estate."

As part of the celebrations, Paul had to prepare the ground for a game each day over the week's festival, which was no mean feat given the mini heatwave the country saw during July. Paul had a lot of help during the celebrations in an attempt to hold back his nickname of 'Mr Grumpy' coming out too much. "In 2013, I was awarded the name in my first season and it just stuck. I probably deserved it back then, but I have mellowed somewhat over the years. I wanted to change people's attitude to the grounds and maintenance and, as a result, I think the club have more respect now for the job I do here and trust in what I'm saying."

"It's never going to be a full-time position here as it wouldn't pay the mortgage, but if I had my time again, I would get an apprenticeship from an early age and work my way through the ranks."

Keep walking those miles Paul - you're doing a great job!