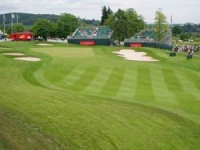 This year's Wales Open provided some of the best golf yet seen at The Celtic Manor Resort. Day one saw the course record beaten by Phillip Archer, he narrowly missed a birdie on the 18th to finish on 9 under par, one shot short of breaking the all time PGA European Tour record. 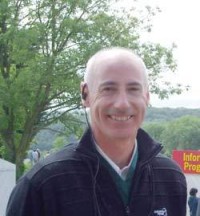 The eventual winner Robert Karlsson, finished the first day on 61 and continued his form to pick up a cheque for £250,000. The tournament provided some excellent scoring with Portugal's Jose-Filipe Lima shooting an eight-under 61 as well.

The par-69 Roman Road course is the shortest used on the European Tour at 6,743 yards and was used for the second year while the Wentwood Hills course is being restructured for next year's Wales Open and the Ryder Cup in 2010.

Mike Stewart (right), PGA Tournament Director said " It has been an excellent tournament this year, the build up was not ideal but with the weather improving every day, the course just looks better and better."

Mike works on behalf of the players and caters for all aspects of their tournament and will oversee eight PGA events around the world this year. 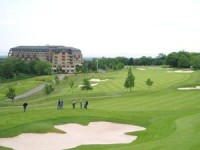 "We've started the tournament at The Celtic Manor Resort with the greens running at 9'6" on a Stimpmeter, 10' is about right for this course because of the slopes and contours on the greens. With the weather continuing to improve they should run a little faster each day. On flatter greens we would aim to be at 10'6"."

It is all to easy to forget, given the glorious weather that we've all enjoyed the last few days, that only a week or so ago, the course was waterlogged. Even as late as Monday on the week of the tournament, many parts of the course hadn't been attended to because of the heavy rain. Jim McKenzie, the Director of Golf and Courses Management and his staff worked extremely hard, not only to get the grass down, but to present the course beautifully for the Wales Open 2006.

Well done to all concerned.