There are many historical sportsgrounds in Northern Ireland and Lisburn Cricket Club is one of the more familiar ones. Chris McCullough met up with groundsman Dean Simpson to see how he and his team look after the ground set amongst the historic Wallace Park in the heart of the city. 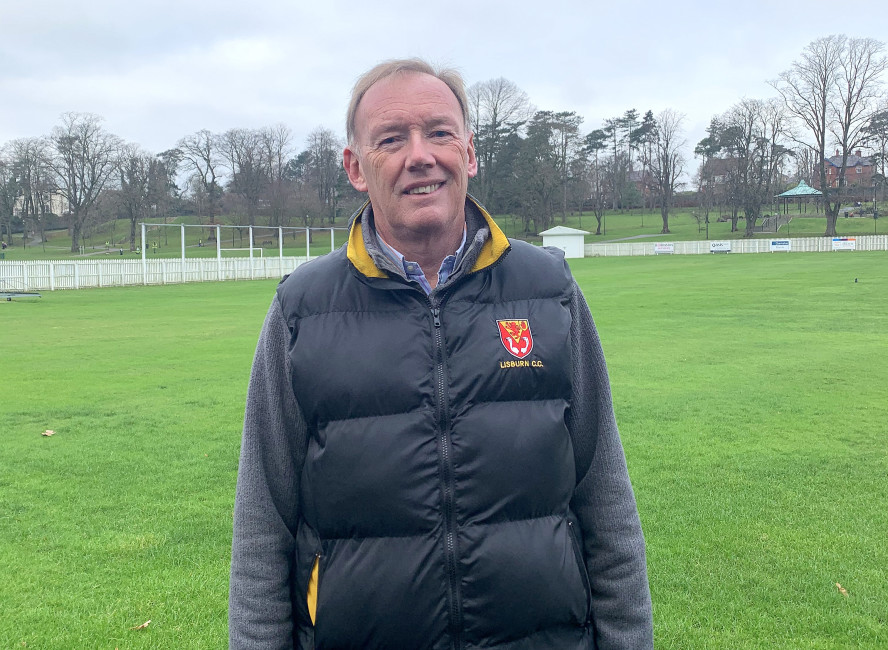 Steeped in history and dating back to 1836, Lisburn Cricket Club is the oldest cricket club in Northern Ireland, and the third oldest in all of Ireland.

Over its existence, the club has enjoyed significant success and firmly established its name among the cricketing communities across the UK, Ireland and even further afield.

The County Antrim club runs adult teams for both men and women, and has residence in the centre of Wallace Park in Lisburn, which hosts its expanded ground and the Cecil Walker pavilion.

As well as the adult teams, the club focuses on youth participation of the game, and runs some youth teams with kids as young as eight playing there.

Wallace Park extends to twenty-six acres in total and was given to the town of Lisburn by its landlord, Sir Richard Wallace, in 1884 as a public park and recreation ground. Originally known as the People's Park, it was renamed Wallace Park by the Town Commissioners after Sir Richard's death in 1890.

The Lisburn Cricket Club ground predates the park, having played there since 1854, as does the duck pond which was built in the seventeenth century as the town reservoir.

In 2010, Lisburn City Council undertook a major refurbishment of the park, which was completed in 2012. This included works to restore the duck pond and Victorian bandstand, resurface the roads and pathways and install new lighting, CCTV, litter bins and seating. A new children's play area was also created and a new sports pavilion built beside relaid tennis courts. 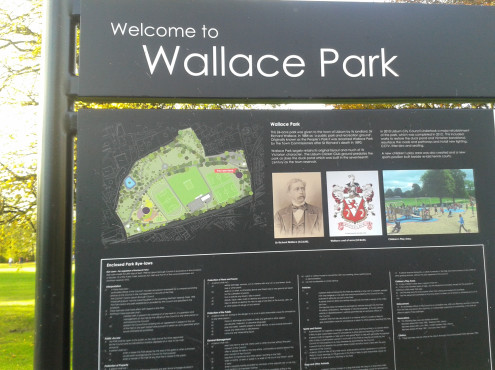 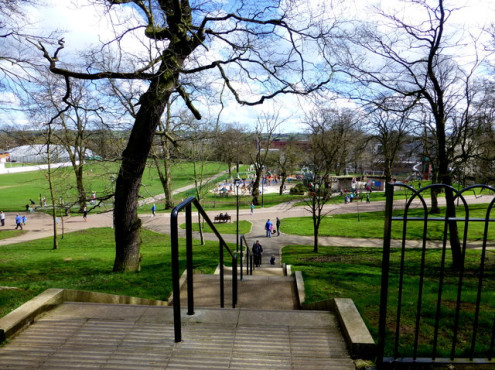 The park provides a green oasis in an otherwise urban landscape and is often busy with visiting dog walkers, families, cyclists and workers on a lunchtime stroll. The many mature trees around the park have lots of cracks and crevices in the bark for small birds to nest and bats to roost. The trees attract a wide range of invertebrates such as caterpillars, aphids, moths, spiders and beetles, upon which the many birds which use the park feed.

Midges, moths and other flying insects will usually become active around dusk and provide a rich source of food for foraging bats such as Common Pipistrelle and Leisler's Bats.

Also at Wallace Park, there are indoor tennis courts and three football pitches. These facilities are maintained by Lisburn City Council independently from the cricket club.

For the past eight years, Dean Simpson has worked as the groundsman looking after Lisburn Cricket Club's pitches and grounds. Dean used to play cricket for the club and picked up all the groundcare skills from his mentors.

Dean said: "I had played cricket and my sons also played for Lisburn Cricket Club so, when I retired from my career in banking, I volunteered to help the late, great Cecil Walker with looking after the grounds."

"When Cecil's health deteriorated, I inherited his role as groundsman. I have no formal qualifications relative to the role, however, I had great mentors in Cecil and the late Beattie Arlow, who had a lifetime of experience in the industry. I guess I learned on the job," he said.

Dean reports to the club management committee and has an annual budget for the normal requirements to keep the grounds in shape. He also pointed out the committee is very helpful when it comes to any additional requests he may have.

Dean works alongside a team of six other retired volunteers and can turn to a number of experts should he need advice on pitch maintenance.

He said: "I am fortunate to have excellent advisors available in Phil McCormick, Michael Kennedy and Neil Hunter. All these guys have huge experience in cricket pitches and grounds and are all very willing to help, support and guide me and the team here."

"We can call in local contractors for any of the bigger projects we are undertaking, and our local council also provides great support."

There is one cricket pitch at Wallace Park taking in around 3.5 acres which the club has responsibility for.

"During the season, from April to September, our ground is used primarily by our club members," said Dean. "With four senior Saturday teams, a ladies team, a mid-week team, youth teams and 250 junior members, it certainly is a busy place."

"However, we also host Cricket Ireland and NCU (inter-pro) representative fixtures and training sessions, regional cup finals and our local schools use it for some of their higher profile games. In total we hosted seventy-five games last season."

"Thankfully we have an artificial pitch on the edge of our square. This was renewed last year. We simply could not cope without it," he said.

Dean and his team follow a comprehensive monthly maintenance plan throughout the season to keep the grounds in tip top condition. 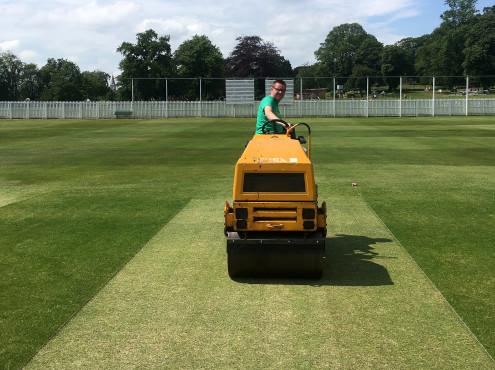 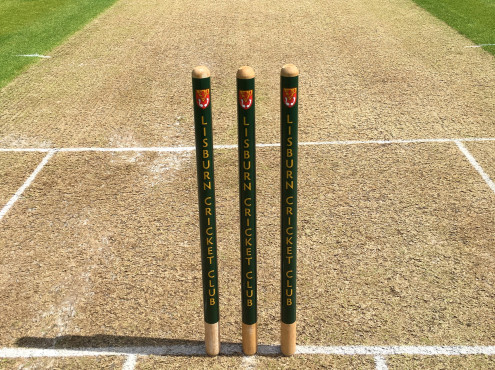 "In May, verticutting of the square and during wicket preparation is an important operation for reducing undesirable thatch and this will help to improve bounce and pace, although wickets will probably still be on the slow side at present as the ground would not have been able to dry out adequately at that stage."

"We normally prepare the wickets seven to ten days before a game, with this time period going up to fourteen days for top-class cricket. A spring, mainly nitrogen, fertiliser should have been applied to the square, however, we keep an eye out for leaching due to the wet weather as this may reduce the anticipated time for the next application."

"Aeration of the outfield can also be considered, before the soil dries out too much. Scarification, to reduce and control thatch build-up, is also ideally undertaken at this time," he said.

Also in May, a light fertiliser, low in nitrogen, can be applied to the outfield, if needed, especially after any aeration and scarification work.

Into June and the verticutter continues to be used for thatch removal and prevention of thatch build-up. Weed growth may be a problem due to the weather in May, so a selective herbicide application is sometimes used. A light nitrogen fertiliser application may be required towards the end of the month.

"Immediately a game is finished, we try and carry out minor repairs as this may enable the wicket to be used again, depending upon the level of cricket and the length of the match, or at least provide the groundwork for re-using the wicket later in the season, if needs be." 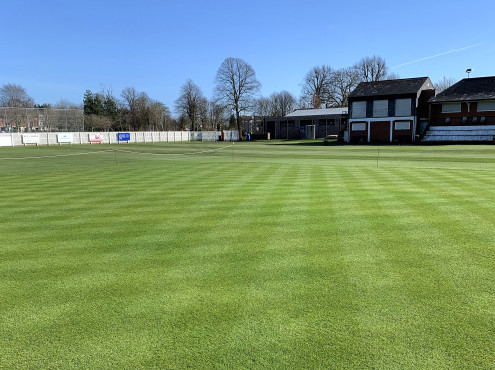 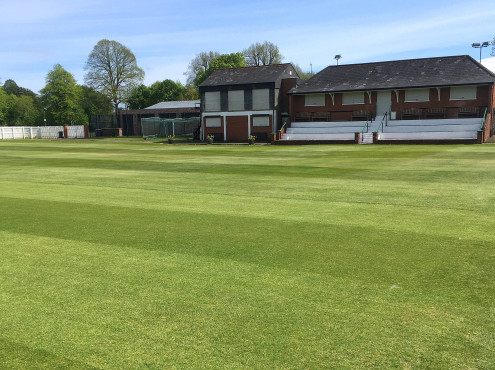 During July, the square is typically mown and verticut on two occasions per week and on the outfield once a week. A correct watering programme to a suitable depth, combined with planned rolling, is carried out to produce a really consolidated playing wicket with excellent bounce.

Towards the end of the month and into August, some wickets that are coming out of use for the few remaining weeks of the season can be renovated early.

Later in August, the ends are lightly forked over to a depth of 50mm to produce a fine seed bed and a suitable grass seed is applied, dominated by perennial ryegrass.

The body of the renovated wicket can be scarified, aerated and spiked with a sarel spiked roller and then oversown with a suitable grass seed mixture.

A suitable fertiliser is applied to the wickets which have been taken out of use, to aid seed germination and sward establishment.

End of season renovations are carried out in September continuing into October. The team fences off the square and keeps it topped at a suitable height of cut of no more than 25mm as this will maintain a suitable sward density and prevent the sward from thinning out if it is left to grow too long.

During the winter, the team carries out more drag brushing and general maintenance in preparation for March and April when the square is a priority for rolling and verticutting.

Dean said: "Presentation is hugely important to me. Obviously the quality of the pitches is paramount but I think the ground should look good as well. I want visitors to be impressed and I want players to enjoy playing at Wallace Park." 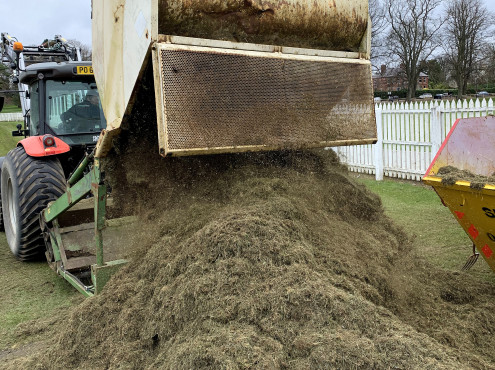 "End of season renovations are critical, but they are affected by club budgets. I am fortunate that I have always been allocated sufficient funding to do all we need to do. However, with the recent increase in prices for fertilizer, loam etc, this will undoubtedly be a challenge for all clubs moving forward."

"Changing weather patterns have been another challenge for us. Watering our square is now a regular requirement during the season. Last year, we were cutting the ground in late November! It just means a bit more work but sure what else would we be doing?" Dean said.

Soil samples are taken annually at Lisburn Cricket Club and analysed by the advisers. The artificial pitch was renewed at the end of last season which involved levelling the base and replacing the surface. This will then be cleaned at the start of each season going forward.

"We don't have any new projects planned, but recently we carried out extensive renovations to our outfield to improve drainage and remove moss that had accumulated over the years," Dean said. "This work was completed by our contractors, Curran Contractors. Our challenge now is to maintain it each year."

When it comes to machinery the club prefers to purchase equipment outright, both new and second hand.

Dean added: "We are fortunate to have someone on our team of volunteers who has worked with machinery all his working life. He services and maintains our machines." 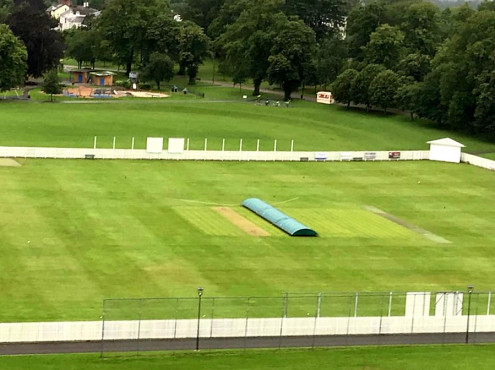 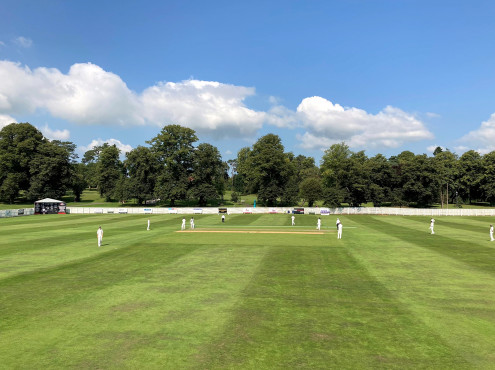 "The club acquired the Ransome Parkway mower relatively recently and it has made a huge difference to the quality and the presentation of our outfield. We also purchased a Ransome Super Certes 61 with the verticutter attachment which is great for the square."

"Phil McCormick spikes our square from November to February. Curran Contractors vertidrain and shockwaves our outfield during the autumn and we hire in a three tonne roller for pre-season rolling."

"Thankfully, we are relatively well off for machinery. I guess we could do with our own spiker and we may soon need a new heavier roller," he added.

Pests are becoming a problem at the club grounds, but Dean and his team can handle them. He said: "We employ specialists to deal with any pest control. There was an issue with leatherjackets a few years ago but this has been resolved."

"We now seem to be getting more and more seagulls on the ground. I'm not sure what to do about that, but it's not a major problem."

Dean has his own thoughts on the state of the groundcare industry, with finding staff or volunteers high on the issue list.

Dean said: "Undoubtedly, succession is the biggest issue facing most clubs who rely on volunteers to do the work. In our leagues, the quality of the pitches has improved immeasurably in recent years, driven by the local governing body (NCU), the advisers, and the clubs who bought into the plan to raise the standard. I hope there are younger members keen to carry this forward in years to come."

"I have to say that at Lisburn Cricket Club we are not at all undervalued. In fact, our team is very much appreciated by everyone involved at the club. Hopefully, if they read this, they might even buy us a drink during the season," he laughed. 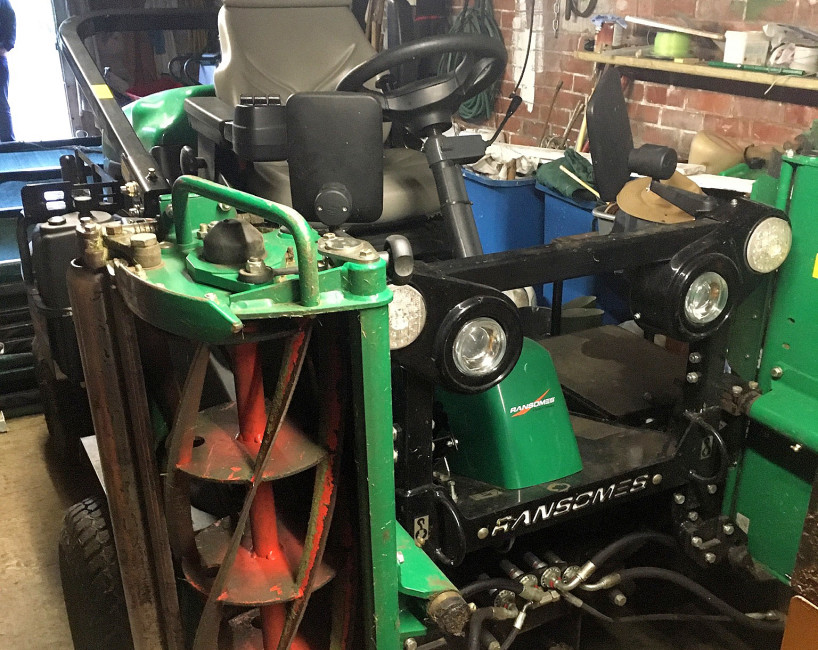