0 Warwick Racecourse - Jumping into the future 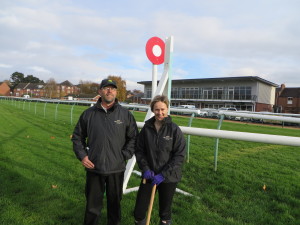 Warwick has a long and illustrious history, starting in 1754 when the first races were held at St Mary's Ground, just steps from the Castle and historic St Mary's church. Flat racing greats, such as Fred Archer, Sir Gordon Richards and Lester Piggott, all rode at the course, whilst it also hosted a Derby winner, but by the 21st century, it was becoming increasingly difficult to meet the sport's demands.

"It is hard for a small track to sustain racing under both codes," explains Clerk of the Course Jane Hedley. "The course is unique in its topography, with a short, sharp hill in the back straight, with a dog-leg leading to the straight on the sprint course which were challenging for flat horses. There were one or two incidents and, in 2014, the decision was taken to focus on jump racing."

The 'winter game' also has a strong tradition at the Midlands racecourse, which hosted Britain's first hurdle race recorded in the Racing Calendar in 1831. Today, its hill and bends provide a fair, varied track which, together with its central location, make an attractive proving ground for horses heading for the championship races at the Cheltenham Festival. A series of five fences down the back straight - unusual on modern racecourses - offer a good education for aspiring jumping stars.

In the depths of winter, while other tracks are resting their battle-scarred turf, Warwick takes centre stage with January's Classic Chase day featuring a £60,000 Grade 3 open handicap and, in February, the Kingmaker day with a £40,000 Grade 2 chase.

Warwick also takes advantage of the popularity of jump racing in the locality with a 'May Carnival' comprising Bank Holiday and Saturday evening fixtures aimed at all the family. "And then we get the hardcore racing fans on weekdays, so there is something for everyone," comments Jane.

On predominantly clay soil, careful preparations are needed by Jane and her team, led by Head Groundsman Guy Woodward, to offer the best possible footing at the toughest time of year for nurturing turf.

A drainage programme has begun to make improvements - no meetings were lost in the notoriously soggy 2015/16 season - and there is more to come.

But extra ground on the outside of the track, available now it does not need to be saved for flat racing, also offers a lot more flexibility.
Prior to 2014, the chase and hurdle track supported eleven fixtures, with the flat track running round the outside of it on the left-handed circuit. 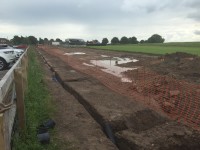 The increase to seventeen jump fixtures puts extra pressure on the chase and hurdle running lines.

"The change means that we will be able to make full use of the limited space available to us by utilising the former flat track," says Jane.

The first phase has been to widen the steeplechase track and give extra space across the fences to allow ground to be saved. "We did consider portable steeplechase fences, which could be moved onto fresh ground, but the existing fences ride well and the jockeys were keen that they shouldn't be altered."

"We decided to widen these jumps so that we can rail off to save up to five yards of ground on the innermost running line, and then swap over to fresh ground for the next meeting; they are now 8ft wider in the back straight, with the aim to widen ten fences eventually," she explains. "We also refurbished the take-off and landing areas." 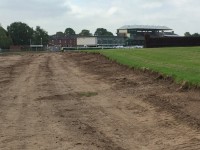 The next step was to widen the hurdle track by integrating the former flat racing line. However, the positioning of the running rail had created a 'lip' from the crossing after the winning post to the top of the hill so, in the summer of 2016, after the second phase of drainage on the jumps track, the land was levelled and reseeded.

"This will eventually give us 50m width within which we can move rail, and will mean that we should be able to present fresh ground for each meeting," says Guy.

This summer's good growing conditions meant that the new grass germinated rapidly and has established well.

"It will probably be out of action for most of the 2016/17 season, but if we needed to take a bit of ground to save a meeting after Christmas, we could," comments Guy. 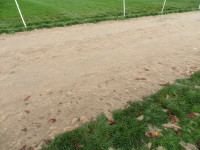 Woodchip road crossings, which had become slippery, have been swapped for FibreSand, and the canter down and horsewalk are due for the same treatment, hopefully with some assistance from the local council which wishes to use the path as a cycle track.

One peculiarity of the racecourse is copious public access points, which leave Guy and his team constantly on the lookout for dog walkers when moving machinery or carrying out maintenance operations. A local byelaw prohibits access on racedays.

Guy came to Warwick in May, having worked at Newcastle, Yarmouth and Nottingham previously, and comments that the track presents a different challenge to his previous roles.

"Having the summer to carry out renovations is a novelty - being able to do drainage works, for example, at a favourable time of year will be a real benefit."

The sward was cut right down in the summer to allow the ground to dry out, before watering started in September ready for the early meetings. "This gets the grass active and ready for a feed of 15:5:20 + Mg fertiliser at 20g/sqm. Harrowing revealed the areas that needed overseeding, which was also carried out at this time. It was very effective - we had so much grass growth that I was mowing three times a week in the run-up to the first meeting!" he says.

Autumn preparations include verti-draining, and the slitter is used until mid-November when the ground starts to get too wet.

"In general, drainage is very good," comments Jane. "In March, there was a big downpour and Guy's predecessor called me to say that we might have a problem as there was a huge puddle on the back straight and we were four days away from a meeting. Two days later it was almost gone and, on the Sunday, we raced on soft to heavy ground."

Mowing is carried out with a John Deere WAM, and although the final cut is normally made in November, Guy points out: "You can't make rules any more - in some recent winters, I have been mowing in December." 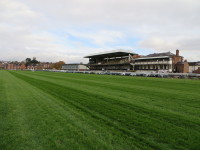 The extra ground to prepare for the winter has prompted a review of mowing equipment and Guy comments that he will be looking at all the options next year.

"Although the WAM does a good job, modern tractor mounted mowers have the updraft to take out wheelings, so they are also under consideration."

Another area under consideration for change is seed choice - Barsprint is currently the product of choice, but Guy is also trialing tetraploid ryegrasses for improved winter germination.

An additional Briggs irrigator has been added to help with preparation for early season races and Jane comments that, in common with all Jockey Club Racecourses, there is an increasing focus on investment in the tracks and maintenance machinery.

"We aim to improve year on year, and the group deal with John Deere is significant as the operating lease that we have agreed frees up capital for other equipment."

A Dennis G860 pedestrian mower has been added to improve presentation of the parade and pre-parade rings.

"This is an area that I'm keen to develop," says Guy. "The public areas are compact and user-friendly, but I would like to make them look more attractive, perhaps by adding some hanging baskets and trees. At Yarmouth, we took part in Britain in Bloom and worked hard on presentation, but it is trickier with a winter course!"

Whilst most national hunt courses are accustomed to dealing with wet, icy or wintry conditions, autumn 2016 presented a different challenge with prolonged warm and dry weather.

"It started to hit home by November when trainers had run out of the lower quality horses which like to run on firmer ground, but were not prepared to run the better horses in the conditions - we saw unusually small fields at the beginning of the month," recalls Jane.

"It is a challenge - we aim to maintain good ground whilst doing as little as possible to achieve this. We could have watered, but there was the forecast of rain which did not materialise. Fortunately, we have good grass cover, so it is always safe footing." 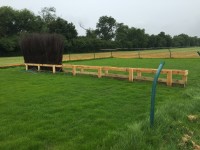 "Under normal circumstances, the fact that we have to water for the September fixtures puts us in a better position than tracks that don't water earlier in the year."

Warwick is home to lots of events throughout the year and Jane comments that the plan is to build on this further, given its central location and ample parking. "Improving the appearance of public areas will also be key to this," says Guy.

The fresh ideas generated by a relatively new team - Jane joined in December 2015 from Market Rasen to provide an improved fit with her role as clerk at flat track Nottingham - are balanced by the local knowledge of experienced Warwick groundstaff. Simon Butler has been at the track for twenty-five years and was recently promoted to Assistant Head Groundsman, whilst parade ring specialist 'Digger' is of a similar vintage. Paul Delaney joined Warwick two years ago and Simon Lloyd has recently been recruited from the Belfry.

1683 First reference to racing in the county of Warwickshire in the London Gazette
1707 Donation from Warwick Castle for the 'making of a horse race'
1754 Racing staged at the new course on St Mary's Land
1789 Warwick awarded a Royal Plate race, with 100gns prize funded by the National Exchequer
1809 First permanent grandstand erected
1831 2 mile hurdle race added to the programme - the first recorded in the Racing Calendar
1833 Present day layout settled on
1841 Coronation wins Derby Trial at Warwick and goes on to win the Epsom Derby
1883 Course enclosed, betting rings introduced and admission charge levied for the first time
1897 First starting tapes used
1949 11,000 racegoers head to Warwick to see racing recommence after World War II
1967 Town Council hands responsibility for the course to the Racecourse Holdings Trust
2002 AP McCoy surpasses Sir Gordon Richards' record of 269 winners in a season on Valfonic at Warwick
2014 Warwick becomes jumping only