by Peter Britton
in Conservation & Ecology
on 10 Jan 2017 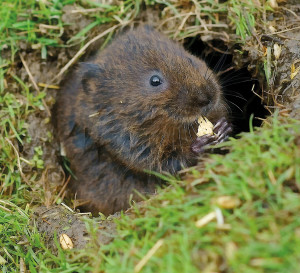 Let's be honest, not many people like rats so, when Winston Graham wrongly cast the unassuming Water Vole as 'Ratty' in Wind in the Willows, the little critter was often seen as a pest. Nowadays though, much more is known about its lifestyle, yet they are now so rare they are listed as a 'priority species' in the UK. Peter Britton looks at a few simple ways you could help Ratty out of his predicament

The water vole is listed as a 'Priority Species' in the UK. Nationwide surveys have revealed that water voles are absent from around 90% of the sites where they were previously recorded prior to World War II.

The main reasons behind this dramatic decline are habitat loss, degradation and fragmentation, and predation by introduced American mink (see issue 67 or visit https://www.pitchcare.com/magazine/american-mink.html for further information).

Agricultural intensification, unsympathetic river management, drainage of wetland marshes/ponds and building development have all contributed to the loss of the water vole's wetland habitat. They are now so rare that the remaining populations are increasingly isolated and particularly vulnerable to further habitat loss, mink predation, flooding and excessive disturbance.

Water voles are semi-aquatic herbivorous rodents that are closely related to lemming, muskrat (neither of which are found in Britain) and other species of vole. At 14-22cm (not including the tail), and weighing in at 140-350g, they are Britain's largest vole - considerably larger than the field vole and bank vole, both of which are 'mouse' sized.

Water voles are very strong swimmers with water-repellent fur that prevents waterlogging whilst diving. Unlike other semi-aquatic mammals, they do not possess webbed feet and are, in fact, much more suited to a burrowing existence - hence their scientific name, Arvicola terrestris; terrestris meaning 'of the earth'.

Unfortunately, water voles are often mistaken for rats; those much less welcome residents on our waterways! Therefore, it is very important to be able to distinguish the water vole from the similar-sized brown rat. 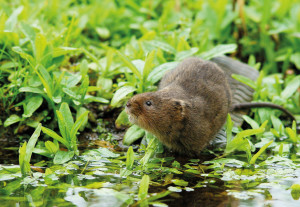 It is often informally called the 'water rat', although it only bears a superficial resemblance. Water voles have rounder noses than rats, deep brown fur, chubby faces and short fuzzy ears; unlike rats their tails, paws and ears are covered with hair.

Water voles are active during the day and, if abundant, are relatively easy to spot with their characteristic hunchback feeding posture. It is also worth just listening out for the 'plop' as they splash dive into the water.

Like many small rodents, water voles only live about five months in the wild, but have the capacity to breed like proverbial wildfire; a female may be directly responsible for over one hundred offspring in one breeding season!

Why save the water vole?

Water voles are a good indicator of the health of any water you have at your facility. If they are present, then all is generally well (excuse the pun).

They have relatively simple requirements - water, banks for burrowing in and ample vegetation for food and cover. Consequently, water voles will inhabit most open water and wetland habitats; rivers, streams, canals, burns, wet ditches, lakes, ponds, marshes, reedbeds and so forth.

However, they do require sites to have certain characteristics if a population is to thrive.

Slow-flowing or still waters, with little or no significant fluctuations in water levels, are preferred. They also like deepish water of around one metre.

Despite being strong swimmers, water voles bolt to their burrows for safety when disturbed or threatened by predators. They like to create their burrows in steep earth riverbanks and dig out their nesting chambers above the water level. Bare, exposed or canalised watercourses tend to be avoided.

Water voles prefer banks with tall herbaceous vegetation that provides both food and cover from predators, with plentiful marginal vegetation at the water's edge. 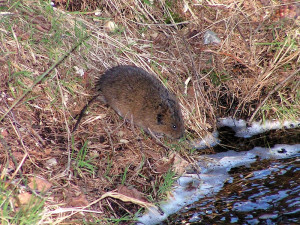 They tend to feed on the lush stems, leaves and flowers of plants such as meadowsweet, willowherb, nettles, yellow flag iris, reeds, grasses, rushes and sedges. It is, therefore, a good idea to encourage these plants where possible.

However, they will resort to feeding on roots, willow bark, rhizomes and bulbs in the winter months when such food is scarce.

Pollarding, coppicing, bankside tree thinning, hedge laying and extensive scrub control should not be carried out between 1st March and 31st August (bird nesting season). Care must also be taken to ensure that habitats important to other protected species - for example bats, otters, native crayfish etc. - are not damaged accidentally.

Please note that waste logs, branches and brash can be used to construct artificial otter holts should you be fortunate enough to have them in your locality.

De-silt ditches as infrequently as possible - once every five years is about right. This should only be carried out between mid-September and late January. Avoid de-silting more than half the wet ditch in any winter. Only cut 'in-flow' aquatic vegetation from mid-September to late February, and try to leave up to 50% intact to avoid bank erosion from faster flowing water.

Non-woody bankside vegetation should only be cut once every three to five years, and in rotation, so that each bank is not cut more than once in two years. Limit cutting regimes to the autumn and try to leave a third of each wet ditch untouched (e.g. 10-20m lengths) as refuges for water voles.

Reduction of overshading of banks and water encourages a healthy growth of bankside, marginal and aquatic vegetation. This can be achieved by pollarding willows, coppicing young alder and hazel, trimming overhanging branches, laying waterside hedges and rotating scrub management. 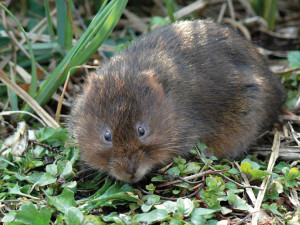 If you are considering the installation of a new water feature at your facility, it makes perfect sense to do so with wildlife in mind. Not only will the members be enthralled by the goings-on in and around the pond, but you will also be doing your bit to help the local ecology.

Whilst the many species will have different requirements for their watery home, it is possible to accomodate a whole range of wildlife with careful planning.

I would recommend talking to your county Wildlife Trust, or contacting Bob Taylor at the STRI, who will be more than willing to give helpful advice.

A few pointers to attract water voles: ensure there is sufficient water all year round and that the banks are soft, steep and/or stepped. The banks should be lush and herbaceous with plenty of aquatic vegetation and very litte or no overshading. Where possible, build new features close to existing watercourses or other wetland habitats that already support water voles and other wildlife.

If you have 'dry ditches' then, simply by installing timber boards or bunds at regular intervals of roughly 50m, water can be retained in otherwise dry ditches by creating small linear ponds perfect for water voles. As long as the boards/bunds are below banktop - less than a third the depth of the ditch - they will not impede the flow of water when the ditch is at bank full capacity.

Water Voles and the law

As of 6th April 2008, water voles are fully protected under Section 9 of the Wildlife and Countryside Act 1981 (as amended).
Legal protection for water voles makes it an offence to:

• intentionally or recklessly damage, destroy or obstruct access to any structure or place which water voles use for shelter or protection or disturb water voles whilst they are using such a place

• possess or control a live or dead water vole, or any part of a water vole

This legal protection requires that due care and attention is paid to the presence of water voles, and that appropriate actions are taken to avoid committing offences.

Landowners wishing to alter or build on areas used by water voles must ensure that unnecessary damage is avoided and all reasonable steps are taken to minimise impacts on water voles or their burrows.

Best practice includes surveying the site for water voles during the breeding season prior to planning any work and ensuring that appropriate avoidance or mitigation measures are included in the proposals.

Offences under Section 9 of the Wildlife and Countryside Act carry a maximum penalty of a fine not exceeding Level 5 on the standard scale (currently £5000), imprisonment for up to six months, or both.

In addition, the courts may order the forfeiture of any vehicle or other thing that was used to commit the offence. Please note that licences are available from Natural England to allow certain activities, under strict conditions, that would otherwise be offences.

If you require further guidance on the legal status of water voles or information on licensing, please contact Natural England for advice on dealing with wildlife management.