Waterlooville greenkeepers hailed 'a great group of lads' for volunteering to spruce up the garden of dad left almost blind after two cardiac arrests and severe sepsis. Praise has been heaped on to a team of golf course greenkeepers who volunteered their time to spruce up the garden of a Waterlooville dad who 'died twice'.

Ricky Kirk, 39, had aspired to rejuvenate his family's Galaxie Road back garden until he suffered two cardiac arrests on June 25, 2018.

What followed was a three-month spell at Queen Alexandra Hospital, before he returned home to his fiancée Clarissa Knight and their three-year-old son, George, brain-damaged and almost blind after contracting severe sepsis and pneumonia.

The 39-year-old hoped to beautify the space after renovating his family home, but was put into a coma and forced to spend three months at Queen Alexandra Hospital.

He has returned to live with his fiancée, Clarissa, but she is now his full-time carer after he was left brain-damaged and almost blind because of severe sepsis and pneumonia.

'Until he died Ricky had worked so hard in the house and his plan was always to do the garden last,' Clarissa said.

'The vision was to get rid of all the rubble so it can become somewhere really nice that Ricky and George can enjoy together and can bond again.'

She added: 'For Ricky to have pulled through all of this is absolutely remarkable, but it has had an effect on his relationship with George, because one minute his dad was there then suddenly he wasn't."

'Their bond is starting to build again but if we get this space done it will come on leaps and bounds in the spring and the summer.' 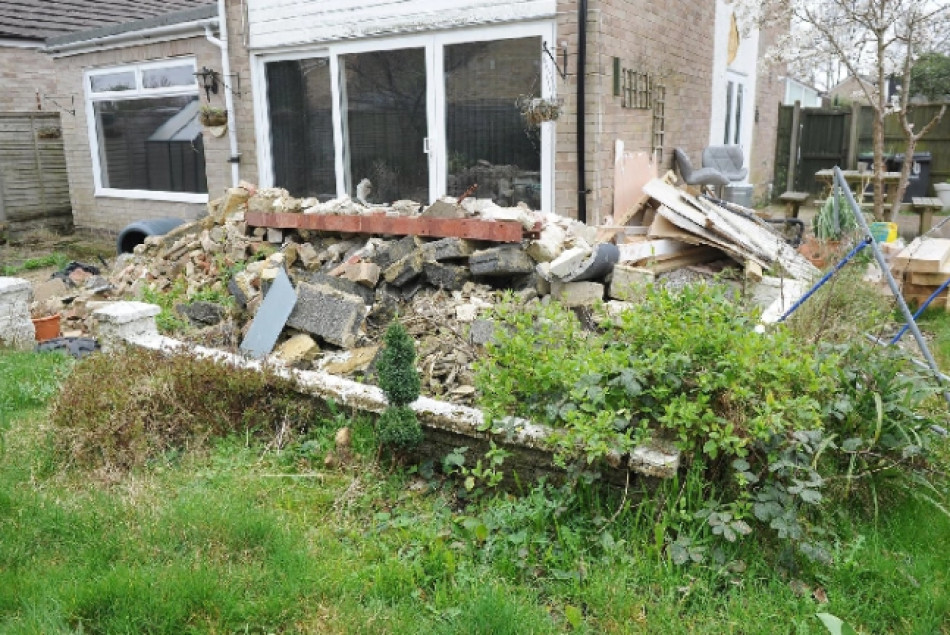 The mounds of rubble which sat in Ricky Kirk's garden before the Campaign for Ricky was launched. Picture: Habibur Rahman

A community drive, the Campaign for Ricky, saw scores of Hampshire firms get their hands dirty to finally give Mr Kirk his dream garden.

That work was generously continued on Wednesday last week by seven staff from Waterlooville Golf Club.

Clarissa said: 'They worked super hard since 10.00am rotavating our garden, weeding, seeding and planting - it really does look fantastic.'

'There's white sheeting over the garden at the moment to encourage growth of the grass but we're so grateful for the fantastic job they did.'

'They're a great group of lads and we had a good laugh too.'

On the day he suffered the cardiac arrests Ricky had been at work as normal, before returning to his Galaxie Road home, having his dinner and going to bed.

As he laid next to Clarissa he complained of chest pains, an ambulance was called and his condition worsened dramatically when paramedics arrived - all while George was asleep.

The drama that followed, he said, 'almost wrecked' his 'superb' family life and has left him fearing he will never be able to tie the knot with Clarissa or take George on holiday.

'We were on a high - I had a good job, I was providing for the family and we had not long bought a lovely home,' he said. 'I didn't know this was coming and I had no way to prepare.

'I am stupidly lucky to be alive and I am so glad and surprised that I'm still here. I have been through a hell of a situation.'

Dubbed the Campaign for Ricky, the project was the brainchild of family friend Michelle Dewdney.

You can read the original article from The News HERE