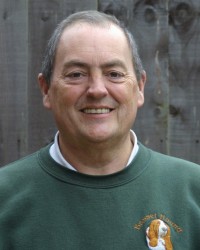 "It's time the world of bowls woke up to the true costs and the extremely good value a bowls club provides. Most of us spend more on haircuts than we do on bowls membership"
Chris Sherriff, Greenkeeper, Welwyn & District Bowls Club


I've been playing bowls at Welwyn & District Bowls Club for over thirty years and, in that time, experienced lots of, shall we say, variable surfaces. Like so many others, I started at the local park. As a child, I recall trying the game at Phear Park in Devon whilst on holiday about forty-five years ago.

In 1989, our club took over the bowls facility from the Parish Council. It was a difficult time as, like most bowls clubs, we had no money and the local authority objected to the £4,000 a year it was costing to maintain the green and club house. The green was in poor condition and many visiting clubs cringed at the thought of playing on our green.

Our major advantage was that we had an excellent group of willing members. In our first year, we purchased a 21" Lloyds Paladin mower (still in use today) and employed a local trainee groundsman to cut the grass. Regretably, he failed to turn up on a regular basis, so we decided to take it on ourselves.

For the rest of that summer, we shut the green between 5.00pm and 6.00pm each evening for cutting. My old mate, Mo, and I shared the cutting as we were both working in full time jobs. It was evident that this would not be sufficient input to the green, and we persuaded a reluctant Mo to take on the job of greenkeeper, as he retired from work at the end of the season. We purchased a Sisis Rotorake (still in use today) and a Turfman, and off we went.

Those first couple of years were difficult, but great fun. I became green ranger (for us this meant the liaison between greenkeeper and members), and all members were asked to speak with me, not the greenkeeper, if they had comments on the way the green played. I forgot to mention, ol' Mo was a Yorkshireman and, if you said something in the wrong tone, he was ready to walk off the job. Despite this, we all loved him. He was a true friend to me and the club. Regrettably, he passed away last autumn.

Mo looked after our green for ten years, until his knees gave out. During that time I would assist with the heavy work, such as scarifying and autumn renovation. During this period the green took on a new life, as did the club, with a new clubhouse being built and membership booming to 160 playing members. We even had thirteen people on the waiting list at one point; how things change!

Mo was succeeded by a group of willing volunteers, and I dropped out at this point due to work commitments. The volunteers carried out all the work under the guidance of the new green ranger. Regrettably, due to personality clashes, much of the knowledge was not passed on and the green, whilst remaining healthy, was not a good playing surface.

Following redundancy in 2003, the club chairman asked me what I thought of our green (I guess he thought my view was worth listening to, as I had been to the national finals a couple of times and was part of the Middleton Cup Squad). I asked 'do you want the truth?' He said yes, so I told him the truth, 'it's crap!' He responded by asking me if it was something I could look to take on. I went away and worked out a price for doing the work, which the club accepted and, so, became greenkeeper in 2004.

Whilst I don't expect that all will share my view, nevertheless I think the best bowls greenkeepers are those that have bowled at a reasonable level, as they know what to expect from a playing surface. It is a constant trade-off between the health of the green and the surface we want to play on. 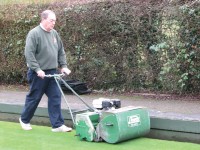 I had worked with Mo in the past, but not really taken it all on board but, lucky for me, ol' Mo was still there to provide advice.

One of my first requests of the club was to purchase a 24" Lloyd's Paladin TG. Grooming was a great opportunity to improve green speed. With the exception of really dry periods, I don't cut without the groomer, set 2mm below cut.

The first couple of years went well, and I recall the departure of two lady members from our club because the green was too quick. They had lost their competitive advantage, as all the ladies could now reach the jack. 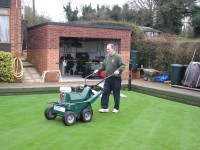 Also in 2006, we were given a view that our green, and the way it was constructed in 1965, was such that it had run its course. Typical of the period, it was built with a clinker base and, even to this day, only has six inches of soil profile, despite four tonnes of topdressing annually for the last twenty-two years!

We had to consider the annual spend to keep the green going against the prospect of a new surface. We even looked at the possibility of introducing an all-weather surface but, I'm pleased to say, the members wanted to continue playing on grass.

This meant an in increase in my budget and a chance to look at better machinery. During the period the 'team' looked after the green, they had replaced the Turfman with a Sisis Dart and, by now, I had used this for two years. I found the machine disappointing, as the depth of aeration was limited and had contributed to a pan at three inches. There were several areas of black layer, some of which was due to the club house shadow. To address this, I persuaded the club to engage the services of Ecosol, 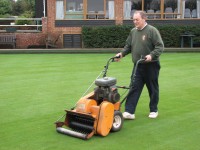 and we carried out a 'Drill n Fill' operation in the autumn of 2008. This improved the drainage considerably.

Thankfully, the Dart died, and the cost of repair was beyond consideration. Enter the Groundsman 345HD. What a shock rang through my fingers when I tried to aerate at five inches! It took me a whole year to get to that depth without the machine kicking and screaming!

Based on my success at Welwyn, I was approached by Hatfield Bowls Club, in the summer of 2006, to look after their green. Due to other activities at the time - cutting lawns and the odd Mr Fix-it jobs - I was unable to consider the offer. A year later, I asked a local architect to draw-up some plans for an extension on my home. He turned out to be the chairman at Hatfield and asked if I would reconsider taking on their green as they were looking to improve the playing surface.

Spookily, just the day before this, I had stopped grass cutting for the local private flats, and was now in a position to consider their offer. If I had been asked a week earlier, I would have said no.

After visiting the club and green, I prepared a proposal. The Hatfield club showed a real commitment to improvement as they agreed a spend that included a new 24" Paladin TG, Sisis Mk5 Rotorake, Sisis True Level roller and a Scout sprayer. They already had a Groundsman 345MD, and guess what else they had? A greens iron.

This was my first experience of this tool and, despite some horror stories I had heard, I find these tools great for the pace of the green, so long as you aerate to counteract the compaction effects - about two inches deep in my case.

My first summer at Hatfield showed good improvement in pace and playability. Even the bar staff were pleased, as they no longer had to put up with the moans and groans of members and visitors! Now they had visitors complimenting the club on the improvements. 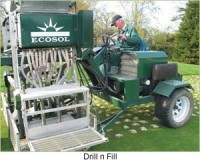 . The Hatfield drainage has also improved, but has a long way to go. Worms are a nightmare! I found out, a couple of months ago, that in the sixties the site used to be a pond!

Well, things can never stand still and, based on the success of the turf iron at Hatfield, I thought I would get one for the Welwyn green. At around £5,000 for a new one, there was no way I was going to justify this spend to a club that were already happy with their green. So, I sought a second hand one. I managed to buy a three foot model from a golf course for £700 and donated it to the club.

Since then, I have persuaded the club to spend another £700 on a turf ventilator attachment so that, every time I iron the green, I am sorrel rolling at the same time. I'm a great believer in getting machines to do the work. Anyone who has pushed a sorrel roller over a bowling green does not want to do it regularly and, probably, never again! The easier a job is to do, the more likely it is going to be done. 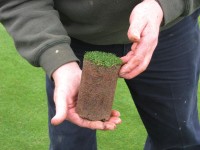 At this point in time, we are six months into production of a DVD entitled 'A Year In The Life Of Our Green'. Now, we are not a film crew, just the club webmaster, Edward Webb, on camera and yours truly, 'the grass cutter' on editing, music and voice over. If you've ever seen the STRI video/DVD on bowling green maintenance, you will know why we are making our own!

What we are producing is something to enable our members to better understand what is involved in the maintenance of a green, the machinery used and some kind of justification for the cost of it all.

Myself and Kevin Brazier, the greenkeeper at Harpenden Bowls Club, are also considering a winter road show of the Hertfordshire clubs to try and provide a message to the clubs about activities and costs. It's time the world of bowls woke up to the true costs and the extremely good value a bowls club provides. I suggest that a reasonable average membership fee is £80-100 per annum. Most of us spend more on haircuts than we do on bowls membership.

The cost of providing a good playing surface is about £2,000 each year on materials, plus the depreciation on £20,000 worth of equipment - about £2,500 per annum over eight years, servicing of equipment, hedge cutting, waste disposal, care of surrounds and repairs. A total in the region of £5,000 per annum, plus whatever you think is appropriate for the greenkeeper. I think the industry standard is about £10.50 per hour. Most bowlers would not get out of bed for a job that paid so little. Alright, I'll get down from my high horse!

A couple of years ago, I was approached by Rick Catchpole, the greenkeeper at Harpenden Bowls Club, with a view to setting up a monthly greenkeepers meeting so that we could all share views and stories. This we have now done, and it has been a great success. Now, representatives from many of the Hertfordshire clubs get together once a month, from October through to March, just for a couple of hours.

Venues move around those clubs willing to host the sessions. Sometimes, it's just a chat and a cuppa. Other times, we visit a venue or get demos from suppliers on one of the greens. We all get the chance to see what other greens are doing.

This initiative includes people who do not work on the greens, such as green rangers and managers, who need to understand what is going on with their greens in order to liaise with their contractors and suppliers.