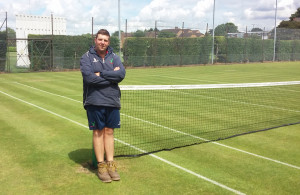 With the All England Lawn Tennis Championships beginning in just over two weeks - 27th June to be precise - Head Groundsman Neil Stubley and his crew will be ensuring that the hallowed turf will be in pristine condition for the players and the viewing millions; and that probably includes keeping everyone and everything off it except for essential groundsmanship work.

So, if you are the BBC and you want to shoot promotional videos for Wimbledon Fortnight ahead of the tournament, what do you do? You head to West Herts Sports and Social Club, that's what.

Twenty-four year old George is in his sixth summer at West Herts and has recently completed NVQ Level 3. Groundsmanship is in his blood; his father Bob is Head Groundsman at Barnet FC, who was featured recently in the Pitchcare magazine - https://www.pitchcare.com/magazine/barnet-football-club-a-hive-of-activity.html

The attraction of a quick dash up the M1 from central London to central Watford was one of the reasons that the BBC chose the venue for the shoot. 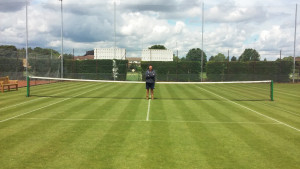 George explains that he has a number or tennis professionals come in to use the grass courts for practice ahead of the Queens and Wimbledon tournaments. "I have a letter from Guildford Tennis Club, where a number of them are based, stating that the courts are considered to be of a similar standard to Queens and Nottingham. The club president put it up in the clubhouse, much to my embarrassment! I will be the first to admit my courts are nowhere near that good. I work alone, other than an occasional assistant that does around ten hours a week. With my budget and manpower, there's no way they're anywhere near that standard in reality, although I will take the compliment."

"To be honest," continues George, "the courts aren't even in great nick at the moment. There are a couple of weeds that have been sprayed off but are still dying back, and the ends have started to wear as well due to the vast amount of play the courts get. They are used three or four evenings a week and most of the day on Saturdays and Sundays from the start of May and right through to September."

However, for the purposes of the BBC promotional video, along with some special effects wizardry, they were considered ideal.

"There was a crew of around forty people on site on that Friday," George explains. "They used all three grass courts for various bits and bobs, but the large majority was filmed on grass court number one. They put green felt up along all of the fences around the court to make it look as much like Wimbledon's centre court as possible. They even used wood effect stickers on our metal tennis posts to make them look like the wooden ones you would see at Wimbledon." 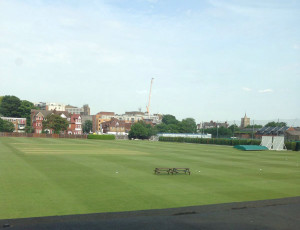 "In terms of my preparations, I double cut and marked the courts on Thursday. I had intended to cut again on Friday morning, but a heavy dew caused me to leave it. I find that cutting in a heavy dew should be avoided where possible as you get a poorer quality of cut and tend to drop some of the clippings."

"On Friday, I arrived at 5.00am and the BBC crew began filming at 7.00am. They finished at about 8.00pm that evening. They had various sound and lighting equipment on site. We had agreed any heavy gear would stay outside of the courts and mats would be used under their smaller pieces of kit. Essentially, you won't be able to tell its West Herts. From what I've been told, they are editing the footage taken here into footage of the Wimbledon grounds."

"The shoot went very well. The crew were very well behaved, made no damage and left the sight spotless behind them."

"The advert will air in the week running up to and right through the Wimbledon fortnight. I and our 200 tennis club members will be watching with interest."