What first caught my eye when I entered the car park at Westhoughton was the pristine-looking outfield - which was all striped up and ready for play - and the impressive, modern-looking clubhouse. I have known Rob Bennett for quite some time, and it was interesting to see how his career had moved on since his time at Rochdale Football Club. While I was at Oldham Athletic AFC, we would be on the phone most weeks discussing our similar situations.

Rob has found his way back to doing what he loves the most - looking after and preparing cricket wickets - which he has been doing since he was fifteen, beginning by helping out his dad who looked after Astley & Tyldesley Cricket Club.

"After leaving school, I was given the wrong careers advice and ended up going into joinery. If I had been given a choice to go into groundsmanship, I would have done, but that wasn't an option back then. I gained most of my experience as a groundsman whilst working with my dad, cutting the outfield and preparing the wickets for free. When I turned twenty-seven, I was given a chance to start my career in the sportsturf industry at Wigan Athletic FC through Rob Turnbull, the club's head groundsman. I started as a groundsman at Orrell Rugby Club (also owned by Wigan Chairman Dave Whelan) but, after a year there, I was moved down to Wigan Athletic's training ground where I spent a few years working under Rob."

"From Wigan, I moved to Middleton Cricket Club in the Central Lancashire League, where I took over from Ian Mather Brewster as their full-time head groundsman. I spent eight really enjoyable years there before moving to Rochdale Football Club to take over from Olly Makin, as head groundsman. My first game was in deepest darkest winter - and it had been snowing - so that was a baptism of fire - or should that be 'snow'! After what was a tough and difficult time for me at Rochdale, I had two months of getting my head right." "I was keen to get back into cricket full-time and saw an advertisement for a head groundsman at Worsley Cricket Club, so I ended up there. A week later, I saw that Farnworth Cricket Club needed a groundsman and I got that too, and I was also doing Heywood Cricket Club part-time."

Rob now had a good base to start his own business. "It works well for me as I can earn more money being self-employed; it is the best thing I have ever done to be fair. Last year, I heard, on the grapevine, that Westhoughton were looking for a groundsman and, after I went for a first and second interview, they said they had heard about the work that I did elsewhere, so they took me on. This place is brilliant, and ideal for me as it's just five minutes from my house. It is a premiership club really, and they have the money to back up what they want to achieve."

So, how does he manage to split his time between all three clubs when the season gets started? "It's difficult," he confesses. "I will normally go to Littleborough first, which is the other side of Rochdale, for 6.00am and spend four hours there. From there, I head back down the A58 to Farnworth, and then the rest of the time I spend here at Westhoughton. I feel managing three clubs is enough. I don't want things to suffer. I could do more and take the money, but then one of the clubs would suffer, and I don't agree with that. If you're doing a job, you do it right, don't you? I work seven days a week in summer, and I don't take any time off from March to October, I take my holidays after the season has finished."

Rob appreciates any help he can get along the way and is grateful to the volunteers who help him out. "At Littleborough, Mark Whitley helps me out with the rolling and will even meet me at 7.00am on a matchday to move the covers. At Farnworth, Simon Booth is great when it comes to the organisational side, like getting machines. Here at Westhoughton, I have a few people who help on a day to day basis; Steven Barton, Keith Horton and Neil Plimley. They cut all the surrounds, gardens and do all the strimming. This enables me to concentrate on the outfield and square, especially with it being such a big site." 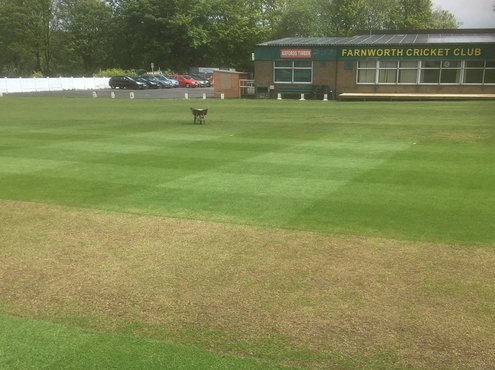 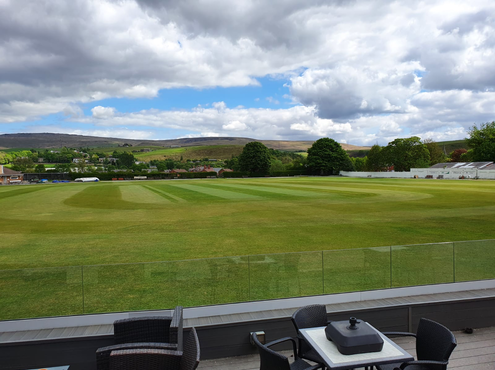 Each club has their own set of challenges, with various constructions, budgets and machines available. "It is all monetary. Here, the square is relatively new, having been constructed eleven years ago. Lancashire CCC were going to use this as their second ground, but they seem to have gone cold on the idea, which is unfortunate. Farnworth and Littleborough are not constructed squares as such and are probably 100 years old, and a lot of different loams have been put on the squares over the years."

"We have roll-on-covers, general covers and Bowcom Bowdrys at each ground, so we have everything we need at each club to help get the matches on."

"At Westhoughton, we have a fully automatic irrigation system with eight Hunter pop-ups around the wicket, which is fed by a tank through the mains. It is great if I want to put the water on; I can do it while sitting at home in the evening. I can either put one of the pre-programmed cycles on, or I'm able to pop up each individual head if I have the covers on part of the wicket."

Rob talks me through the maintenance he undertakes at all three sites. "During the season, I have to prepare a new wicket nearly every week. I try and use the same method to prepare the wickets at all three sites. On a Monday-Tuesday, I will put the verti-cut through it, making sure not to break into the profile, otherwise the wicket would explode! For half an hour a day it will be rolled and, if it needs water, this can be applied on a Monday. Cutting will be done daily, taking the height down to 3mm, and then marked out on a Friday. The squares and the outfield are cut four times a week at 13mm, as I find, if I am cutting four times a week, it is quick enough. I do tend to leave a bit more grass on the square at Littleborough with it being an old square. To be honest, it is dead and needs ripping out. It is something we have talked about, but it would cost the club a hell of a lot of money to put a new square in." 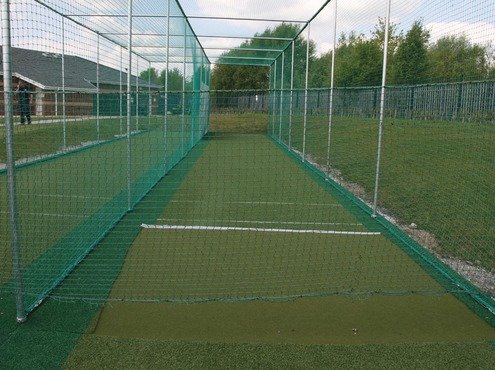 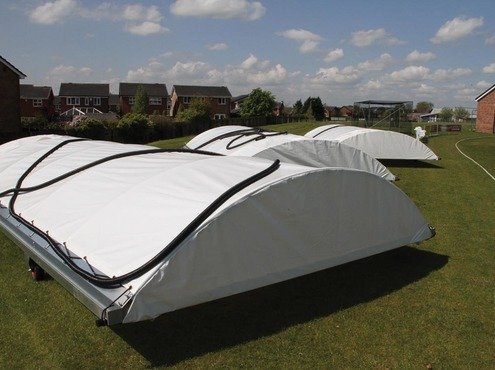 At Westhoughton, Rob has a fertiliser programme in place as they have a bigger budget available. At the two other sites, he devises his own programmes. "Here, I use ICL products, and I have Phil Collinson to provide me with a programme which best suits our soil profile. We have seen some excellent results on the square and outfield since starting the programme. I use fertiliser from a local supplier on Farnworth and Littleborough. I have a good idea of what is required and what works as I have been using their products for a while."

With the government having given the go-ahead for domestic cricket to restart after lockdown, Rob says this has come as a great relief to both himself and the clubs he works for, as it will bring in much-needed revenue. It also meant he could prepare his first wickets of the season, whilst his plans for renovation at all three sites will now go ahead. "I will work with Richard Roberts, Head Greenkeeper at Hart Common Golf Club, to carry out renovations at all three sites. At Westhoughton, I plan to fraise mow the square to take all the vegetation out and start afresh as there is a lot of Poa in it. I will decide at the time to either put the ProCore or Verti-Drain over it, as this will help when keying in the loam. You need something to key into with loam; you cannot just drop it on without keying it in, as you will just start to make pans. We will put down 300-400 bags of loam, which is around seven tonnes, using a drop spreader. I would like to get a laser grading machine in just to move the loam about and fill everything in. After eleven years, there is a bit of settlement on the square. Don't get me wrong, it's flat, but not as flat as I would like it. We will disc seed it three ways with the Vredo using eight bags of Barenbrug Bar Extreme 100% perennial ryegrass. This will come through thick, but I feel it is better having more than not enough, I can just verti-cut out if required."

Rob has some of his own machines that he uses at each club, but he does have machinery available to him which the clubs own themselves. When purchasing machinery, the budget at each venue determines how they can buy new equipment. "Farnworth and Littleborough would tend to buy second-hand equipment. Here at Westhoughton, if they are going for the smaller machines like a new wicket or square mower, they would go brand new. The bigger purchases they will buy second-hand, like the Toro outfield mower we recently bought from Cheshire Turf Machinery." Rob suffers from worms on the square and outfields. "I use Purity which is a soil conditioner on the squares. It is not designed to control worms but, if you put it on in the right weather, the surface is heaving with the critters shortly after. Other than that, I will brush the squares every day during the winter months to knock the worm casts off. On the outfields, I will use a brush to knock off the casts; it is the best practice we have available to us."

Rob hinted to me during our catch up that he would like to take on an apprentice, so he can pass on what he has learned over the years. This would also give someone a good base to start a career in the industry. "I think we need more kids involved and more money from the government to help with apprentices. I have looked at getting an apprentice, and I have asked my friend who owns a company what the annual costs are to take someone on, and it is around £11,000. For me, I just cannot afford to pay someone that kind of money, especially for a young person who cannot touch a machine in the first year hardly. I would love to bring someone into the industry and give them the chance I should have had when I was leaving school but, unfortunately, it is just too much money."

"I don't know what we are going to do as an industry to attract more people, it is a difficult one and cleverer people than me have tried to sort it out in the past. I believe getting involved in the industry most of the time comes from being interested in cricket, golf, football etc. If we don't get more young people involved, soon people like myself will be working until we are eighty years old, and I do not want to do that!"