by Laurence Gale MSc
in Consultancy
on 14 Jan 2013

Toad Rush (Juncus bufonius) is a common species of rush found worldwide. It grows in moist conditions and is considered a weed in many areas. Toad Rush is an annual monocot that is quite variable in appearance. It is sometimes described as a complex of variants labelled with one species name.

It is generally a green, clumping, grasslike rush with many thin stems wrapped with a few threadlike leaves. The flowers are borne in inflorescences and also in the joint where the inflorescence branches off of the stem.

The flowering period is from September through to March and is a grassy flower folded within tough bracts and tepals (a term used when there is little distinction between sepals and petals).

Small, narrow-leaved annual rush with many slender stems, 2-39 cm tall, often quite short and grass-like. The leaves are thin, straight and channelled. Small clusters of 1-8 pale to rusty-brown flowers above a leafy bract (leaf-like structure) on a branched flower-head. Flowers in spring to early summer. 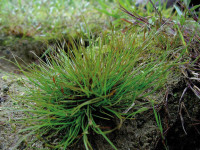 Found growing in a range of soils from sands to clays. The plant has a distinct preference for moist soils and is usually found near permanent water or, at least, periodic flooding for part of the year, e.g. the margins of swamps, drainage lines and ditches. It is tolerant of slightly saline soils, particularly when rainfall has leached out topsoil salt.

Toad Rush is an opportunist and can also be commonly found growing on fine turf facilities (bowls and golf greens) when conditions favour the plant. It is generally found in turf that holds moisture and can be regularly seen growing in small clumps dispersed around the green.

The key to its control is recognising the weed. An accurate identification of the weed you have and then combating the symptoms that enable the plant to thrive. Greens that have excessive thatch and are prone to lying wet will provide the ideal conditions for Toad Rush to flourish.

Treat the symptoms, reduce thatch levels, aerate and topdress to improve the surface drainage of the green.

Generally, if you carry out a robust maintenance programme with thorough spring and end of season renovations, topdress with appropriate rootzone dressings and have a regular verticutting programme throughout the growing season, you will be more in control of thatch levels and reduce the likelihood of promoting a green that would be susceptible to Toad Rush.

Instigating an appropriate feeding and overseeding programme will also ensure your green is well populated and retains a dense sward, thereby reducing the chance of weed seeds such as Toad Rush from establishing.

As for the Toad Rush plants you already have in your green, depending on the extent of the invasion, you can treat them in the following way:

- Toad Rush hates close mowing and cutting into its crown - so pre-season verticutting or scarifying, coupled with a reduction in cutting height, should put it under stress and reduce its capacity

- Spot treat with a selective herbicide that has diethanolamine salt, known as 2,4-D, as the active ingredient e.g. Depitox. Paint on with a paint brush.

- Spot treat with a total herbicide, using Glyphosate, being mindful it will kill all vegetation and, therefore, being very careful how it is applied; again, paint on with a paint brush

Click for a range of selective / non selective weed killers


What is a monocot?

Monocots are one of two major groups of flowering plants (or angiosperms) that are traditionally recognised, the other being dicots. Monocot seedlings typically have one cotyledon (seed-leaf), in contrast to the two cotyledons typical of dicots.

According to the International Union for Conservation of Nature, there are 59,300 species of monocots. The largest family in this group (and in the flowering plants as a whole), by number of species, are the orchids (family Orchidaceae), with more than 20,000 species.

In agriculture, the majority of the biomass produced comes from monocots. The true grasses (Gramineae) are the most economically important family in this group. These include all the true grains (rice, wheat, maize, etc.), the pasture grasses, sugar cane and the bamboos. True grasses have evolved to become highly specialised for wind pollination.

Many plants cultivated for their blooms are also from the monocot group, notably lilies, daffodils, irises, amaryllis, orchids, cannas, bluebells and tulips.