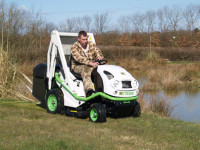 Climate change and a summer of record rainfalls have given a sales boost to European lawnmower manufacturer, Etesia.

In calculating their end-of-year figures, the UK company reports that the resultant wet grass conditions have contributed to an increase in sales of both pedestrian and ride-on rotary mowers.

Commenting, Etesia's UK General Manager, Les Malin says, "There has been a marked difference this season - it is mainly in the Midlands and Northern regions where the turf has been at its wettest that we have seen an increase in sales."

One reason, he says, is the fact that many professional end users and local authorities are often contracted to make a minimum number of cuts per year - this means that they still have to cut grass, whatever the weather. In these conditions, the chutes of most mowers repeatedly block, drop clippings and fail to give a satisfactory finish on sodden grass.

The secret of Etesia's success this summer lies in their unique deck and discharge system, designed to cut and collect without clogging, even in long wet grass. "Commercial end users are turning to Etesia because, whatever the weather, our rotaries just keep on going in conditions where other machines from the competition have stopped and given up!" explains Les Malin, adding, "The most evident increases have been in two areas. Firstly, the Hydro 100 100cm ride-on range - this is a market leader which has become even more popular since the introduction of the diesel version last year. In addition, the order book for pedestrian rotaries filled to the degree that during this season we totally ran out stocks of our latest Pro53 53cm self-propelled rotaries. Our factory has had to go into production to manufacture more machines to meet demand."