by Lee Williams
in Multi-sports venues, Football, Tennis, and Cricket
on 07 Jun 2021

Lytham Cricket and Sports Club is situated a stone's throw away from the Fylde coastline and is primarily the home of Lytham Cricket Club. Over the years, many other sports have come to call this ground home and, the club's twenty-five-year-old full-time Head Groundsman, Thomas Wells took some time out of his busy schedule to speak to Lee Williams. 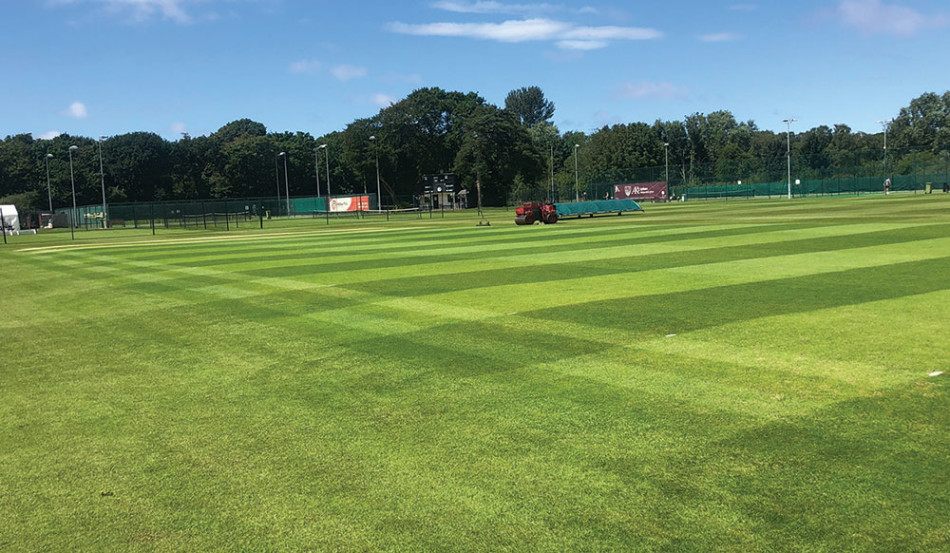 Thomas' heavy workload is such that he manages the facilities at both Lytham Sports Club along with his part-time role at Garstang Cricket Club, and he is responsible for the budgets at both grounds. "It's been a big step up since being at Lytham. At Garstang it's just one playing surface, whereas at Lytham there are four different surfaces in one, which means that I have to create and plan the budget according to what I deem essential."

Situated one hundred metres from the sea, Thomas describes the majority of the site as a heavy sand-based soil. Both the grass tennis courts and the cricket square are on Kettering loam. "This does mean that the site drains well and, generally, the only time we have a problem is during winter when the water table is so high that we get standing water, but after one or two dry days, the water soon goes and you can get back on with things."

"We do have an old clay land-based drainage system which, as far as I'm aware, is over seventy years old, but it does still pull - that is until it is made redundant, once the water table hits a certain level. After confirmation from the previous groundsman, we have only had one game called off due to rain in the last seven years." 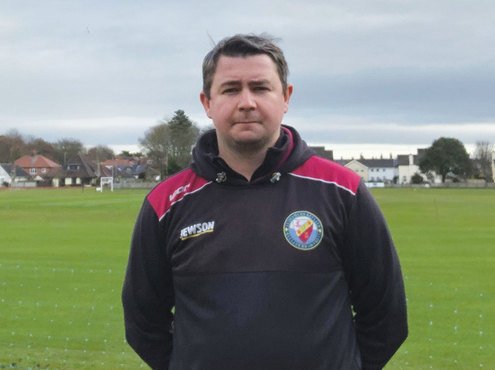 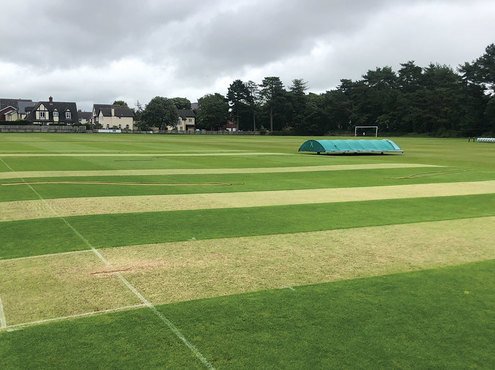 The club has six roll-on covers that allow Thomas to produce (then cover-up) two fresh wickets for every Saturday and Sunday.

He talks me through the maintenance of the football pitch. "During the season, I cut with the John Deere 2653B triple mower at a height of 27mm, but I do occasionally lift it to 30mm - depending on the weather forecast and the amount of wear and tear. I will try and do at least a single pass with the Jacobsen ride-on with the verti-cut units, once a month during the season. Every week, I will run over the pitch with the SISIS drag brush to get any debris to the surface and then go over with our Kubota BX2200, with cutting deck and collector box, to suck up any debris. The pitch is divoted and rolled after every match."

To help visualise and give more insight into the maintenance work Thomas undertakes on the cricket wicket, I asked him to break down his routine, starting with pre-season and what preparations he undertakes leading up to a match. 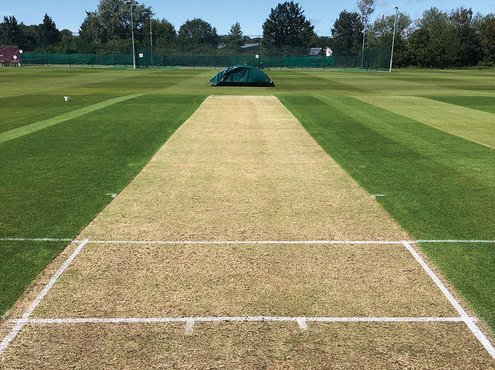 "I found the best results are with six hours plus of rolling on a wicket; the above plan is a minimum. During the playing season, the outfield is cut at a height of 15mm then rises to a height of 30mm in winter and it's spiked when it is fit to do so."

Last summer, the club invested in a state-of-the-art dome to cover two of the artificial tennis courts during winter. "It ended up costing around £120,000, but it has been a godsend on days when it is hammering down as it allows the members to play tennis all-year-round. Ours goes up in September and comes down in March and it's similar to the inflatable domes you occasionally see at Premier League football clubs. I feel it has been a good investment; these courts have the potential to be booked out from 8.00am to 10.00pm every night, with the floodlights beaming through the canvas - it's a great way for that section to make extra money."

The investment does not stop there though. Thomas continued: "In the next two to five years, we are looking to build a new clubhouse. The current facilities are starting to get dated, and during that process, we will also look into potentially relaying fourteen wickets on the square. At the minute, we have twenty-four wickets; one half is for senior cricket and the other half is focused on junior cricket, but they are going to look to swap it around which will mean senior cricket has a more sufficient boundary. The square surface has been down for one hundred and forty years - it has sufficient depth, but some of the wickets are just starting to become a bit dull and lifeless, so they are in much need of rejuvenating."

"After speaking to a couple of contractors, they believe we could Koro the top one or two inches off, before rotavating the surface to decompact the subsoil and stone bury it, followed by the laser grader. Next, we will apply fresh loam - layer by layer - and laser grade it again to give us the correct levels." 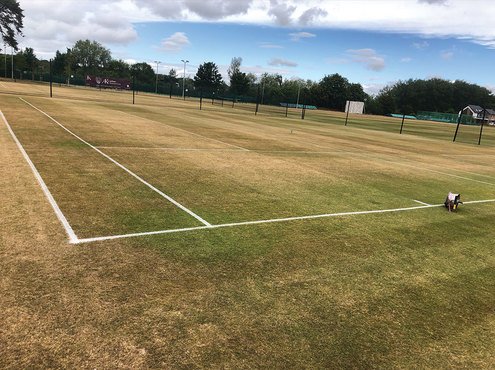 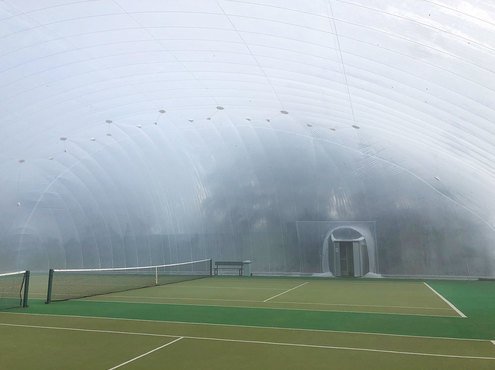 "The new clubhouse development was due to start this winter, but has unfortunately been put back a year or two due to the pandemic. The project will potentially take eighteen months to complete, which will give us sufficient time to get the square done and give it that grow-in period; fit for play at the same time the club reopens its doors."

The club owns all of its machines and is a mixture of new and second-hand, which have mainly been purchased through Balmers GM Ltd and Campey Turf Care Systems. "I'm not loyal to any one manufacturer and I'm more than happy to try a range of machines before deciding on a piece of kit. MAC Services carry out servicing of the ride-on machines, Mark1Mowers in Kirkham service the pedestrian machines and Reelsharp Services have started to regrind all the cutting cylinders in winter.

Thomas tells me when it comes to pest and disease control, he likes to steer clear of using chemicals where possible. "If we have any problems with things like moles or rabbits, we get a specialist company from the local area to treat. To control weeds, we tend to spray a selective herbicide once a year around the end of March/early April."

"During spring, we tend to have a small problem with rabbits, but the local foxes tend to stop the issue by the summer months. This winter, we have also had a slight problem with casting worms, so I have been trialing Purity Soil Conditioner. It has considerably reduced the amount and we will hopefully continue to see the benefits throughout the year."

"The only real disease we see, mainly on the courts and the square, is the odd outbreak of red thread, which we treat with a high nitrogen feed to try and grow it out."

The site's ecology is very important to Thomas and its members. "Around three sides of the site, we have a bit of natural woodland and we tend not to cut any of the grass down in those areas to encourage natural wildlife and insects. Over the last six months, the tennis members have put up about a dozen bird and bat boxes behind the clubhouse. In the long run, I would like to introduce an area of natural wildflowers to increase the number of insects and Hymenoptera (bees and wasps) to pollinate. Due to lockdown and no sport being played, I have seen a lot more wildlife around the site."

It struck me whilst chatting to Thomas that he knows his stuff for a youngster (compared to me), so I wanted to find out what encouraged him to get into the industry. "I didn't know what career path to take when I left full-time education in 2013, but as a child, I was sports-driven and played county cricket for Warwickshire until the age of eighteen. Once I realised that I wouldn't make it as a professional cricketer, I turned my thoughts to what the next best thing would be; to become a groundsman and produce playing surfaces. The club that I played for in Birmingham - Knowle and Dorridge Cricket Club - were aware of what I was looking to do and they offered me the chance to work with the groundsmen, Ian Maddocks and Steve Rouse, over the summer. I thoroughly enjoyed the job and I decided this was the career I wanted to pursue so, in 2014, I moved to Preston and attended Myerscough College for two years. I completed NVQ Level Three in Sports Turf Management and, in the second year, I had the opportunity to take over as Head Groundsman at Garstang Cricket Club. This was not only to just look after the grounds, but to play, which I still do today around my job at Lytham."

"Once I finished studying, I got a job at Stonyhurst College as a senior groundsman and became the head of cricket for the senior school, looking after their three ovals. Whilst at Stonyhurst, I completed my PA1, PA2 and PA6 spraying certificates and my BE trailer licence. In February 2020, I was sad to leave to undertake this job at Lytham Sports Club, but the role has given me the chance to step up a level."

All ready for football

Cricket is Thomas's number one sport, but he is open to any opportunity that may arise in the sports turf industry in the future.

Thomas believes the sports turf industry is on the rise, with groundsmen around the country showing that it is not all about just cutting grass - as many people assume. "Social media has made it easier for groundsmen and greenkeepers to post pictures, share experiences and show what grounds people do. I also think that social media has had a massive effect in bringing new blood into the industry."

"Having said that, I think a lot of people take groundsmen/greenskeepers and, more importantly, the volunteers massively for granted, as they just expect playing surfaces to be in perfect condition at all times of the year. They do not see the many hours where employees are doing their best with the equipment and budget. At the end of the day, without hard-working greenkeepers and groundsmen, playing surfaces around the country would drastically suffer. However, it is always good when teams/captains/clubs give praise because it makes the job we love more satisfying."

Being from the younger generation of sports turf professionals, I asked what he would suggest we do to raise the sports turf industries profile, and does he like to attend industry shows?

"I would like to see more schemes in place to give school children the chance to go into sports clubs and see what work is done and given them a chance to volunteer. This would provide a great pathway into the industry for youngsters. I would also like to see a lot more on social media showcasing industry days and events."

"I attend both Saltex and BTME every year - before the pandemic anyway! This was always a great way of networking and meeting new people and getting new ideas to take back to Lytham and put them into practice. I have not been to any demo days or roadshows, but I have been speaking to Campey's and I am keen to host a demo day featuring their products during renovations."