by Frank Newberry
in Consultancy
on 23 Jul 2015

0 Who is getting your job? 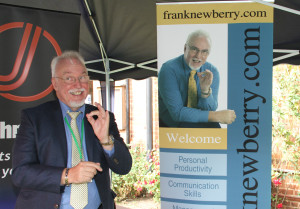 Pitchcare Trainer and Motivational Speaker Frank Newberry looks at who might be getting your job in future, how you and your organisation can get the most out of Succession Planning and what needs to be considered when introducing succession planning at work

One of my first jobs as a manager was as a project team member reporting to senior management on 'manpower planning'. Part of that job was to determine how my own vacancy would be filled if the project role became a permanent one eventually. The project team looked mainly at what recruitment and training would be needed to ensure that we had a technical workforce that could continue to meet the demands of our business over the next twenty years. Our report found that:

1. Our technicians were working flat out and no manpower planning was being done
2. We had an ageing technician workforce and many them were near retiring age
3. There was not enough time to train people to replace all those who were retiring
4. The skills needed were unique to our firm, so external recruitment was not going to help in the short term

The company was rapidly approaching a crisis - of its own making

In short, our company was rapidly approaching a crisis - of its own making. The company's response was a very practical one and the crisis was quickly averted. This outcome was achieved by our company slashing the durations of its technical apprenticeships and other training programmes. A five year apprenticeship, for example, was cut to eighteen months. There were some complaints about the new apprenticeships not being 'proper' apprenticeships but, once the new ones had been running for a couple of years, their perceived value on a person's CV seemed undiminished and complaints quickly dried up.

What I learned as a fresh-faced young manager was that, if we are going to at least maintain and preferably improve standards of work, we need to plan our way forward, no matter what the size and scope of our organisation.

In grounds and greens teams, one way we can start to do this is to ensure that we have a succession plan in place. Regular readers may recall that I touched briefly on succession planning in these pages in 2007 (Quick Tips for Job Seekers). I suggested then that, to get on in your career, you might want to try and get on someone else's succession plan. I also suggested then that most sensible employers will have someone in mind to take over a job, when and if the current job holder leaves the job sooner than expected.

In a typical succession plan, a Deputy would be asked to cover for the Head Groundsman/Head Greenkeeper on a temporary basis until a selection had been organised and people were invited to apply for the vacancy.

I suggested that the person (on the succession plan) covering the vacancy for a few weeks could place themselves in pole position for the permanent job with a good performance as the interim job holder.

Many employers even have succession plans going right through the work team and will even 'develop people into' the more senior roles over a period of months or years. All this made me wonder, back then, if there was anything to stop any of us applying to be on the succession plan of any person working anywhere?

I still feel that nothing need prevent us getting on someone else's succession plan - we just have to indicate our suitability and our availability.

Let us turn now to how our organisation can use a simple five step process to introduce or reinforce an informal succession planning.

Note - Whilst your input is most important to Step 1 - be warned that many groundsmen and greenkeepers have been surprised to learn that their jobs were not critical - some have even lost their jobs when they were combined or outsourced.

A clear understanding of the capabilities needed for successful performance in key areas and critical jobs is essential.

Note - Whilst your input is also most important to Step 2, many Head Groundsmen and Head Greenkeepers run the risk of being accused of promoting their favourites or their friends if this identification of skills and competencies is not done thoroughly and objectively.

Now that critical positions have been recognised and competencies identified, the next step is to choose a range of methods to achieve the succession. These might include developing people already on the team, sounding out people employed elsewhere and testing people at lower levels to see if they have the potential to do critical jobs in the future.

Note - This may not have been the case when you were hired, but many employers now use recruitment interviews for a vacancy at one level to test the future potential of the candidates - to do more critical jobs in higher level work roles.

Once methods have been identified; the next step is to write a flow chart or an action plan. The action plan should have clearly defined milestones and timings and indicate who will be doing what, i.e. roles and responsibilities.

Note - You could be well placed to help your organisation to use such an action plan to help them raise their recruitment and planning standards - not just maintain previous standards.

To ensure that your efforts are successful, it is important to monitor and evaluate each part of the plan and make necessary adjustments.

Note - You could be well placed to help your organisation to see such a plan as a step forward and not an immediately perfect process. Your organisation will get better and better at doing this as time goes by.

So, good luck with your succession planning! It is a cheap and simple way of ensuring work performance standards are maintained or enhanced at times of change. You stand to benefit - as an employer and as an employee.

There may be a course you can attend next winter that will help you to get the best from your work team.

LANTRA accredited Pitchcare workshops (that earn BIGGA CPD points) and are relevant to you as a groundsman or a greenkeeper, next winter include:

You can take one workshop or two, or three or all four of Frank's seminars. You can join the hundreds of other groundsmen and greenkeepers who have been helped, by Pitchcare, to become key players in their own high performance teams.

For more details, including how to book your place on all Pitchcare workshops, visit www.groundsmantraining.co.uk or contact Chris Johnson, Pitchcare's Training Development Manager on 01902 440251 or via email at chris@pitchcare.com