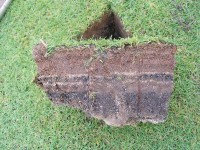 This article aims to explore some of the reasons why a sandy soil/rootzone may fail to drain effectively. It draws on the agronomic experiences and observations over a number of years, coupled with some basic scientific principles.

The difficulties with layering in sandy profiles are discussed, as well as the broad concept of critical tension and problems related to particle size and pore space. Generally, this article is aimed at fine turf but the principles could be easily applied to winter sports and any sport that is developed on sandy soils.

In the ideal world a soil profile would have a uniform and evenly textured content without significant abrupt variances in soil types. However, in practice, changes in topdressing, due to cutting costs or changes in management practices can lead to an accumulation of layers.

It is not uncommon to see USGA type constructions of the 1990s where a medium-coarse sand was used in the construction, but with a medium-fine or even finer topdressing used during subsequent maintenance practices. The result can be poor performance.

The difficulty of having different layers of sand is that any layer of finer sand over another type will, invariably, tend to hold water. This is due to critical tension (discussed later). Once the depth of accumulation reaches that of the critical tension of the sandy topdressing then, all other aspects being equal, the sand will drain. This could, however, be in excess of 300mm for medium-fine sands.

The nett result of the holding of water is often an accumulation of organic matter and, ultimately, invasion of undesirable grasses leading to soft, wet surfaces. Ideally, the layer should be removed but this is often not possible and would be disruptive to play.

The first step to take is to reduce the organic matter build up ensuring removal rates are higher than accumulation. This involves a whole range of management treatments of the surface from hollow coring to fertiliser application.

The presence of organic matter can also slow drainage rates, particularly if not fully broken down. This organic sponge is regularly seen in the top 15-50mm of a fine turf surface and needs removal as described above. Where fungal breakdown of the organic material may occur it can also lead to waxy coatings of the sand grains, making them hydrophobic.

This results in the classic dry patch condition. Modern wetting agents and wax removal agents can make a significant difference to the water percolation ability of a hydrophobic rootzone.

It is vital, however, to continue to use appropriate sandy dressing unless there are other specific issues such as supply, chemical analysis or reliability issues as the gradual build up will eventually help drainage rates. Regular hollow coring and possible deep aeration with topdressing backfill to slowly ameliorate through previous layers will also assist in the process.

Future changes in dressing need to be carefully planned. It is vital that not only any sand/ameliorant ratio is examined but also the sand particle size distribution. Recommendations by your agronomist should be made following a comparison of the new and the existing dressing. It is potentially less problematical if a coarser sand is the new target dressing, but essential with finer sands. Following a change, a period of treatments should follow to key in the new dressing and to increase the longer term layer depth. 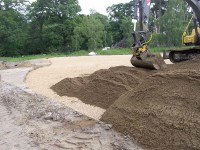 This essentially is a concept that describes the depth of a particular particle sized soil/rootzone required to allow water to freely drain through. This will be determined by the pore space within the soil, which is generally determined by the particle size distribution of the soil. This description of critical tension is very basic as the concept is somewhat more complicated and worthy of an article in itself.

As an example, I have seen a rectangular sponge used to demonstrate critical tension. If the sponge is soaked in water then held up with the short side downwards, the water would fail to drain out. However, if the sponge is held with the long side downwards then water drains out. If this analogy were applied to a medium-fine sandy soil then a depth of around 300mm would allow water to drain through without perching significantly in the profile.

This is typically the depth recommended in the construction of a suspended water table golf green. This depth will allow excess water to be removed but hold some moisture for plant health. If, however, a builders sand was used (typically with a wide spread of particle sizes), a far greater depth of sand would need to be used to reach the same afore described result.

Therefore, if less than or more depth is used than the desired critical tension depth then a soil could drain less or more effectively than expected. Arguably it would be potentially better to compromise on quality rather than on depth if cost were an issue.

In a sports pitch environment it is common to see the use of a medium-fine sand amelioration into an intensively drained native and often heavy soil. If undertaken correctly, this is a cost-effective method of giving good levels of playability even during periods of rainfall. The difficulty is creating the depth of amelioration with a uniform gradation from the native soil through to a sandier top. Often, a quantity of hopefully quality sand is cultivated into the surface.

This can create a sand layer and the result is sometimes worse drainage than if not done.

The key to success is to understand the soil texture and calculate the amount of sand required to give the desired texture and associated drainage performance. The sand could be applied in layers with progressively less deep cultivations occurring with each application. This will help ensure the drainage is not held up by critical tension as the gradation would help avoid water perching.

The final potential drainage problem relating to critical tension is turfing. Unless you use a custom-grown turf on a similar soil as the profile, then water can perch in the turf layer. This can be alleviated to some extent by hollow coring the turf to break through the layer, although it is nearly impossible to soil exchange the whole surface. The use of rootzone washed turf may be an answer as would seeding, but both methods require favourable weather and timescales respectively.

Often we see samples of sandy soils that, in the hand, would appear free draining. In practice, these soils often do not drain. This is often due to a wide range of particle sizes and shapes that produce a resultant low level of pore space.

If a sandy soil has an even particle size distribution from sands to clay then the alarm bells should ring as the pore space, and hence drainage, may be poor. This is due to the close packing of the wide range of particles filling all the gaps. As an example, imagine a jar full of 10mm marbles and a second jar full of marbles with a size from 20mm down to 2mm.

The first jar could be filled with more water than the second due to the closer packing of the second.
The resolution of this problem would be to incorporate a narrow range particle size sand to create a significantly increased percentage over the rest of the finer soil particles to open up the pore space. The use of aeration and penetrant wetting agent would also be of help.

Sometimes, we see the results of the wrong type of sands used and the worst culprit would be soft builders sand on sports pitches. This, if applied, often fills any pore space or fails to ameliorate and tends to make the drainage worse.

The structure of a soil will invariably have an impact on pore space due to fissuring and the presence of soil crumbs. Many new constructions have little rootzone structure and if the texture/depth is not correct then poor drainage will follow. Over time, as the work of soil fauna, flora and plant roots takes place the soil/rootzone may become more structured and drainage improves.

However, sandy soils can have poor structure and therefore needs aeration to keep channels open and air in the profile. Silt soils develop structure but often weakly, being prone to compaction and hence require aeration and decompaction. The best soils for structure can be clays, but their drainage rates can be very low, especially in wet and compacted conditions. Amongst the varying characteristics/properties of sand or clay dominated soils/rootzones, one should also not neglect the huge role that is played by organic matter in soils that drain due to their textural or structural characteristics (another article in itself).

Sands continue to be the most appropriate rootzone/soil ingredient for fine turf. However, a failure to understand basic soil physics can result in poor drainage rates, thatch build up and ingress of undesirable grass species. The playing ability will be compromised.

This article showed how layering, critical tension and pore space could have a direct influence on the drainage potential. Using these principles, hopefully better decisions and maintenance operations can be the result.

By Steve Gingell, STRI Area Manager for the South West