Wild boar have wrecked a children's play area in the Forest of Dean, Glos, churning up almost all the land in their search for food. 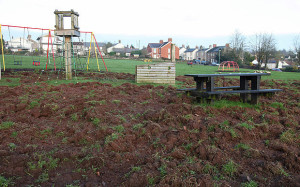 The damage done by the animals has made the Primrose Hill play area near Lydney too dangerous to use, according to locals. They say the boar have been targeting the land for the last couple of months rendering the area "not fit for purpose."

The recent attacks have been blamed on the rocketing population of the boar, which have regularly targeted areas where they believe food to be. Homeowners have reported boar problems in their front lawns, and public open spaces have also been heavily grazed.

Now there are plans to use anti-boar fencing to ward off the animals from attacking the play area again.

Wildlife manager for the Forestry Commission Ian Harvey said: "The play equipment is well used and there's always the concern that a child or adult could turn their feet badly on the uneven ground.

"It's an area the boar have expanded into to feed. If they find an area which has a good source of food they will keep coming back.

"In the Forest we've seen this repeatedly on grass verges outside homes, and it upsets a lot of people. We've always had issues like this with the boar but more problems are being caused as their numbers go up."