Once the site of one of the country's first holiday camps, this delightful course in the heart of the North Downs is set for a fresh beginning. Neville Johnson went there to talk to its new head greenkeeper, Luke Jenkins, who is charged with the job of making it even better. 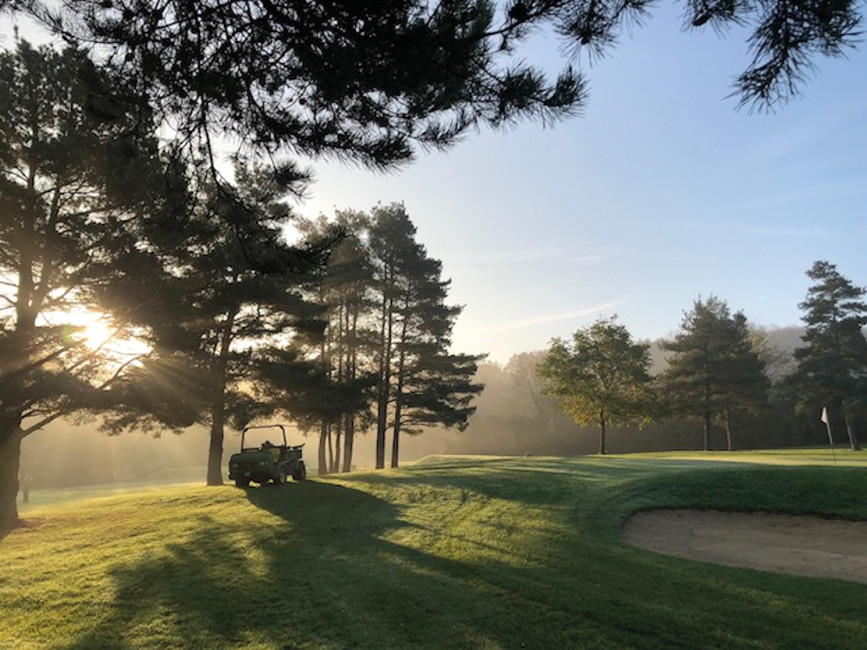 The setting for the Woodlands Manor Golf Club, even on a dull and chilling early winter's day, is more than pleasing on the eye. It is one of its strongest selling points. Kent's North Downs is an Area of Outstanding Natural Beauty and to play golf here has to be one of life's pleasures. It has a loyal membership of just over 400, and no wonder.

It is an 18-hole parkland course, centered on the site of Woodlands Holiday Camp, which ran from 1927 until 1970. It still enjoys very much the same idyllic setting as it did when first designed and built back in 1928 by top professional golfer JH Taylor, and officially opened in 1930 by none other than Henry Cotton. It closed in 1942, but re-opened initially as a 9-holer in 1968 by Harry Weatman and Neil Coles. There has been various reshaping since then.

A recently refurbished clubhouse has upgraded the club's appeal as a worthwhile leisure venue.

"Our club is a hidden gem with stunning views of the Kent countryside. We like to think it's an exclusive hideaway," said General Manager Charlie Bourne.

She is part of a management team put in place by new owners, Unique Leisure and Estates, who bought Woodlands Manor about a year ago with the simplest of mission statements: to make the club the best possible place to enjoy golf and relax. Part of that plan, and key to it, was to improve the course itself.

Last spring, the course did not have a head greenkeeper and maintenance was being carried out by just three, the then owner and two assistants. It was a struggle in terms of labour and resources. The need to raise the greenkeeping game was quickly identified by the new owners. 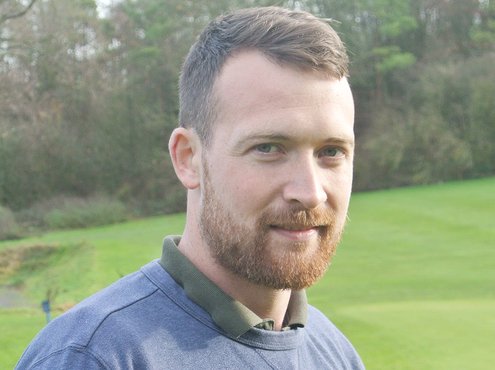 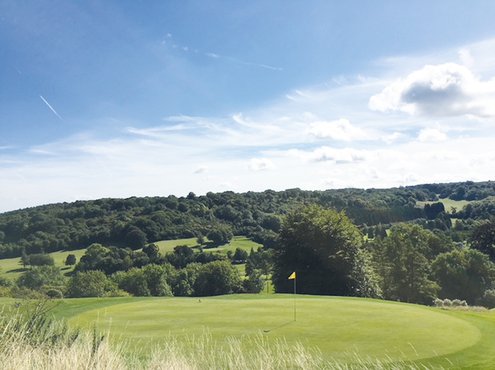 Luke began his career in greenkeeping at sixteen as an apprentice at Shooters Hill Golf Club in south London. By the time he was nineteen, he had worked his way up to be Deputy Head Greenkeeper there. His ambition had always been to be in charge of a course and, with NVQ levels 2 and 3, BIGGA CPD certification, plus chainsaw and spraying certification under his belt, he was a perfect match for the job at Woodlands Manor.

When he took over it, would be true to say the course was not in the best of shape. His brief was a simple one: to build a new greenkeeping team, gather a fresh set of kit quickly ... and to hit the ground running.

"During my first six weeks here, I spent a lot of time laying on the ground repairing equipment on a near completed 5-year lease, but not well maintained," said Luke.

He now has a new fleet of John Deere machines courtesy of Sittingbourne dealers Burden Brothers on a fresh 5-year lease, but with a service agreement and PowerGard 5-year warranty. This covers absolutely anything other than neglect, taking a huge weight off his shoulders and giving him more freedom to concentrate on course improvement.

"I'm well able to handle wear and tear machine care, like hose replacement, and used to sourcing parts. When I came here, in truth there wasn't decent enough equipment to keep on top of course care. Now, there most certainly is." 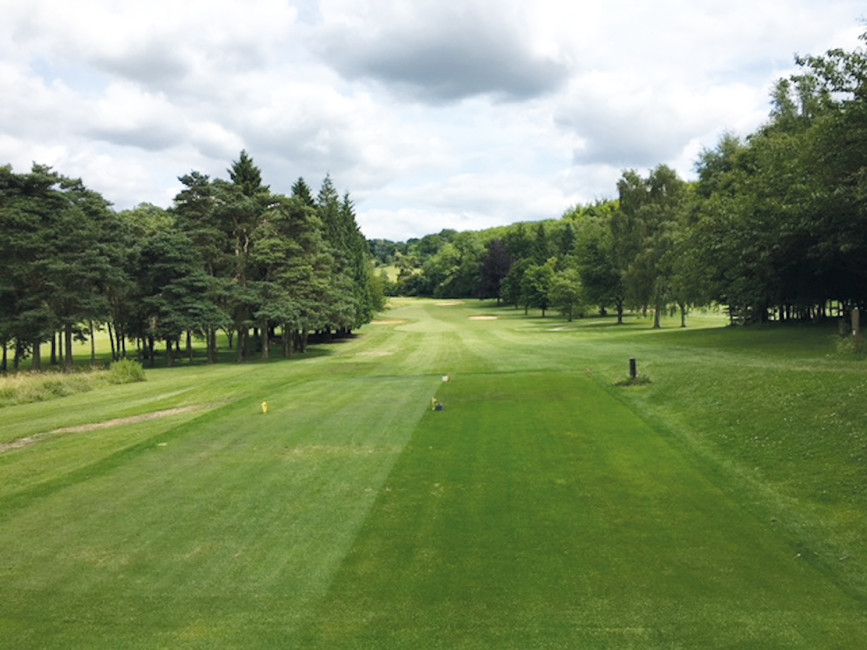 The 18-hole course is quite short, just over 6,000 yards all told, but the course footprint is huge, at over 155 acres. Play is tight, with swathes of woodland on either side. The front nine is at the bottom of Knatts Valley and the back nine runs along the top of the hill. They are two very different sections with contrasting playing conditions, not to mention a quiet country lane in between.

Near surface flint is a feature of the upland back nine, with as little as two inches of topsoil in places. In the valley section, thinnish clay overlays chalk, which is always pretty close to the surface.

The course is generally free draining, but worm casts - and therefore badgers - are a big problem. The high pH means that worms just love it here.
"It's like looking after two different golf courses, the greens especially," said Luke.

"Six of the greens on the top part of the course - the back nine - were reconstructed thirty years or so ago. They're not USGA spec and, for some reason, these do not drain well. There's major work to do on them."

"There appears to be some kind of membrane a couple of feet down which is holding the water. My plan is to tackle them one by one, introducing primary drainage with trench, piping and shingle and run water down into adjacent woodland. There is a lot of natural run-off, so it may not be as big a task as it could be."

The nine holes that run along the valley are the more picturesque part of the course. Blowing and collecting leaves here especially is a time consuming job as autumn passes into winter and Luke said it was a relief - no pun intended - that it was just about over. It was a small price to pay though for the glorious, mostly beech, backdrop skirting these holes. 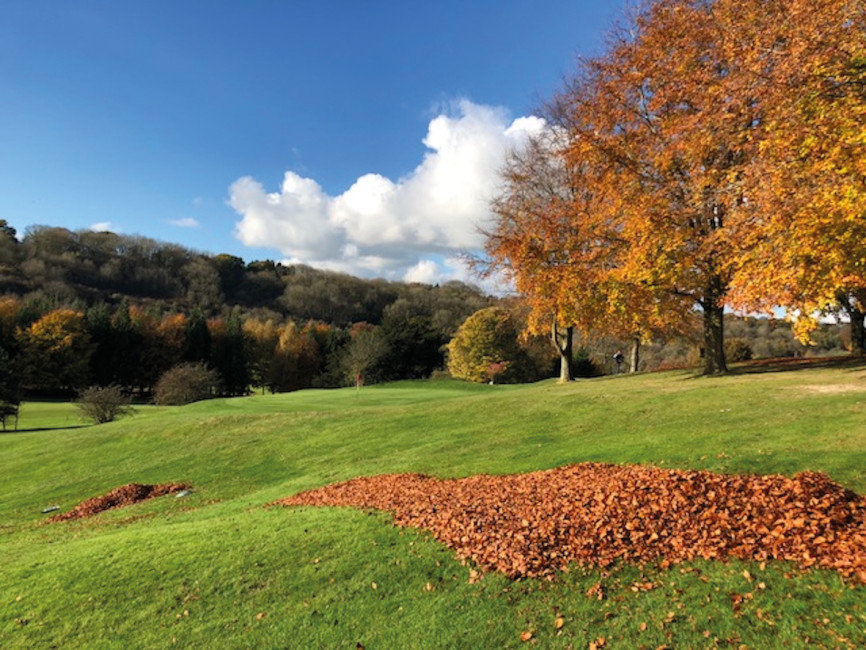 Tree care has been rather neglected over the years and Luke will be doing what he can to improve management of the native Downland trees. A degree of thinning and removal of non-native conifers is a long-term task for his team.

"Lifting canopies to get better airflow to greens and some reshaping of holes is what I plan, but I won't be going into the woodland itself. I will concentrate on coppices between holes and the tree line immediately adjacent to the course."

Luke is quietly hoping for a cold winter because this will allow him to tackle a lot of the necessary tree work.

Path reparation is a big project for the new team and a cold, slow growth winter will also enable this to get under way.

"Everything we're able to do over this winter will be for the long-term improvement of the course. Upgrading the paths is critical," said Luke.

"The one leading from the 10th tee to the 10th green, the steepest of the lot and in some places over 45 degrees, is symptomatic of neglect over many years. Egg box shell plastic, long past its effectiveness is worn and slippery. This section of path is our number one target for repair."

Luke is a practitioner of sustainability. He believes you shouldn't fight nature: just work with it. "I try to use every resource on the course to its maximum," he said.

"Spent sand from a refurbished bunker is useful on a wear and tear area, and makes better sense than buying in material every time."

He definitely does not believe in feeding greens to the extent that it increases need for mowing and scarifying. He spoon-feeds them using liquid rather than granular material, so that he can control growth management. 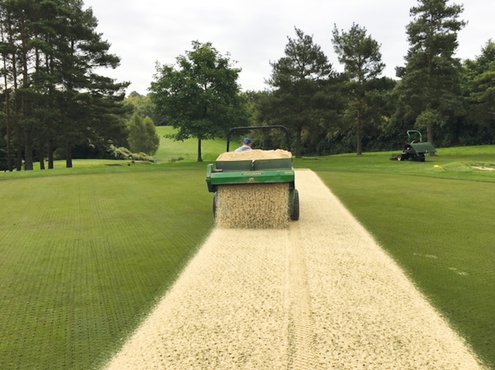 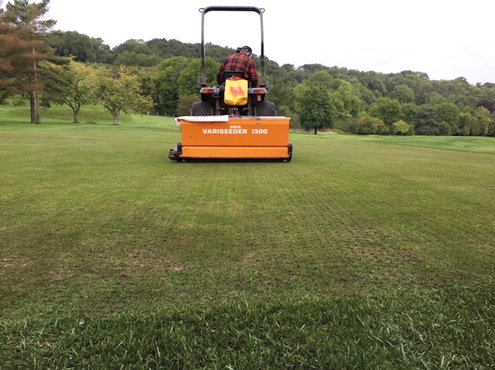 'It's always better to be pro-active rather than re-active, by using as little material as possible to get the best sustainable results. I'm here to create the best course possible, not just get 'painted green' surfaces," he said.

Luke is also an advocate of organic materials in combination with cultural methods for surface nurturing. It's a modus operandi that has stayed with him since his time at Shooters Hill.

"Putting bacteria and fungi into the rootzone has clear benefits and, for me, regular aeration is always better than 'thatch removal in a bottle'," he said.
Whilst he would always prefer organic aids, Luke is a realist and, when needs be, he does use synthetics.

"With all the shade here, we get our fair share of diseases, fusarium especially, so spraying is a necessity. We will always do what we can in terms of prevention by cultural practices. Dew wiping, putting down some iron, but not enough to develop black layer on greens, and fungicide spraying at the right time is my routine for getting optimum effect."

When the new ownership took over, members had very high expectations, perhaps too high. Investment would mean instant changes for the better but, in reality, a lot of what is needed requires hard work and steady application, especially on the course itself.

"Managing golfers' expectations can be the hardest aspect of a greenkeeper's work," said Luke. 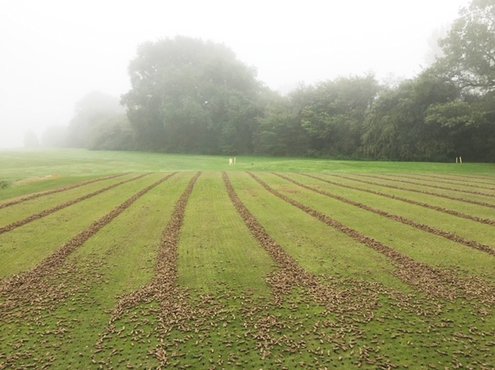 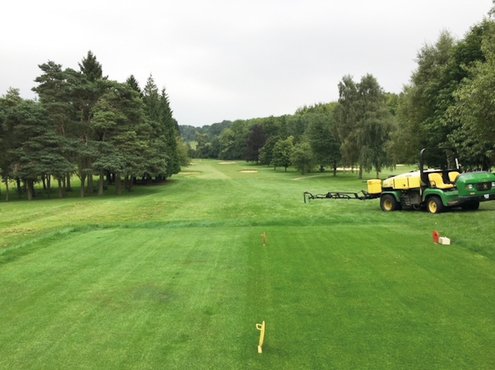 As an imaginative initiative, Luke produces an email newsletter to members, which puts them in the picture about the work his team are doing on the course. It explains the problems the club's greenkeepers are having to deal with and how they're going about solving them.

"The important thing is to be completely honest with them," said Luke. "I truly believe the members are now genuinely behind us in what we're trying to achieve."

Here's a passage from Luke's Autumn newsletter to club members, an example of how he's putting everyone fully in the picture about work on the course:

The greens renovation took place over a month ago now and went well as intended. We managed to hollow core all twenty greens, and clear them, in just two days. The weather wasn't on our side, but we carried on and managed to push forty tonnes of sand into the profile and greens surface. This was a very difficult task. In future, we will not need to spread as much sand, but as this was the first significant topdressing the greens had seen in the last eighteen months, it was necessary. The greens took a while to recover, but that is to be expected, and the recovery time will only improve each time we carry out this exercise. The next planned greens renovation will take place in April next year and a monthly solid tine programme will start this month and carry on through the winter. Don't worry, there will not be any more sand! This aeration programme will benefit the greens hugely and will help with a lot of the problems/disorders we currently experience on many of the greens.

The intention is for all course repair and reconstruction to be done in-house. Luke has a new deputy, Nigel Harris, joining him at the end of the year, bringing the strength of the Woodlands Manor team to five. Already working with him are senior greenkeeper Nigel Dillon, and assistants Ray Ward and Ben Wise, who joined the team in October. Their declared aim is to make the course as good as it can possibly be and to see it reaches its absolute potential. They seem to be well on the way.

As if Luke hadn't enough work on the course, the lead item in his newsletter would be a showstopper for most head greenkeepers.

Well. Can you believe it? It turns out that the badgers that have been destroying our beautiful course for the last few weeks are not badgers at all, but wild boar. In a sense, this is a bit of a relief as this is an animal that isn't protected in the way that badgers are and gives us more options in how to deal with it. There are still badgers causing damage to the turf, mainly on the front nine, but most of the really significant damage with huge rolls of turf lifted on the 2nd and 7th seem to be caused by wild boar. Plans are afoot to deal with this as soon as possible.