The Professional Grounds Team of the Year (Cricket) 2014, are experts in flood management. At Worcestershire County Cricket Club, nobody is a stranger to surface water. Jake Barrow met with Head Groundsman Tim Packwood to find out how the surface recovered after April's incursion by Mother Nature 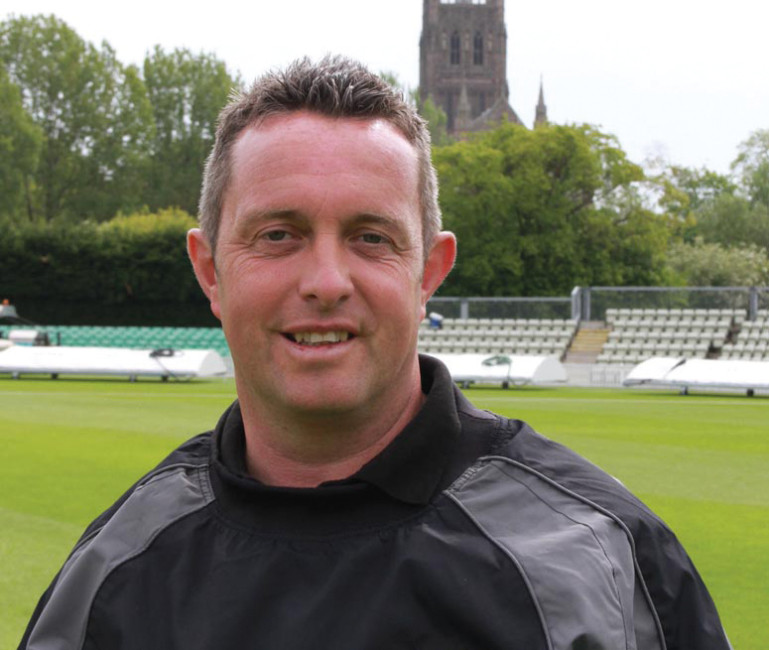 This year's swells were widespread, but not the deepest they've suffered. Floods like this year's, then, provide the team with the opportunity to experiment with their methods.

This account holds the opinions on bouncing back from flooding from one of the country's most flood-knowledgeable head groundspersons, and to present tips to others who find their surfaces underwater.

Water started to reach the Worcester playing surface on 3rd April this year. It came onto the bottom part of the field.

Although they're immediately to the side of the Severn, they do not flood from the river and Cathedral side.

Rather, as the area in which the surface lies is part of a flood plain, it tends to first saturate the neighbouring fields, then spill over to the cricket club from there. It arrives by the marquee, and the side closest to the river is the highest part of the ground, therefore rarely floods.

A 200-metre stretch of the New Road A44 is currently undergoing reconstruction. The road surface is being raised by 15 inches at peak, because the road has occasionally been closed due to impassibility.

The changes may prevent the road from closure, although Tim told me that the last road flood also flooded the bridge, which could close off access to this stretch of the A44 anyway.

By the 5th April, 75% of the field was underwater, with 95% below by the 6th. This left a plinth-sized area at the north of the pitch, from where the players were able to take their annual publicity shots!

The water began draining away by the 8th, and the surface was mostly clear of it by the 9th.

Once the water recedes, the pitch is almost always left with troublesome debris, brought from the water washing over from the King's School and those neighbouring farming areas.

After the recession of the pooled water, this requires a day's work raking and gathering before any further work can be undertaken. "What we normally do is ask Diglis Lock, just down the Severn, the results from their gauge readings. We always have the idea that if the levels reach about 3.5 metres at Diglis, the flood will reach our field."

"If it gets close to 4 metres, it will cover the whole surface. Simultaneously, a flood warning was issued for the area. They will provide us with two heights, a maximum and a minimum."

"Dave Throup from the Environment Agency came to see us on the first day and told us that, because of heavy rain the previous night, another half-a-metre of flood level was likely to occur due to the rain which was still to drift down from Shropshire."

"That gets you panicking a little, because the heights they mentioned suggested it was likely to cover a large portion of the field."

"That's when the groundstaff know they're likely to have to start moving machinery, equipment, anything that would be at risk in the sheds due to water vulnerability."

"We were in the middle of the installation of our new marquee. So, there were two projects going on at once: the usual clearance of our stock; and the safe removal of anything from the marquee area which could equally be damaged."

"A couple of the mowers had only recently been returned from maintenance, and the man who had just brought them back had to immediately remove them again." 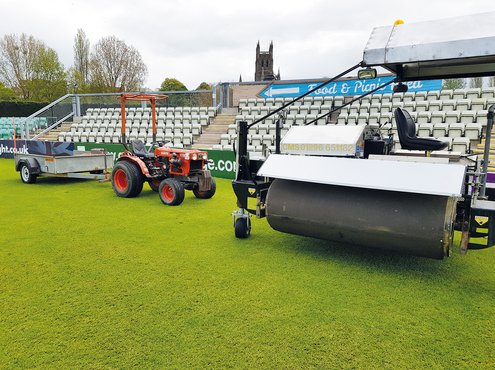 "All the smaller machines were moved to a car park-based portacabin. Perhaps you don't panic immediately, but you focus on protecting the assets in time."

"When the water first started coming on, we left 100-by-80-foot sheets out in the middle, because we still had hope that the coverage estimates were too severe."

"The wicket underneath was supposed to hold the year's opening First XI game, as well as another match. On the 5th, the water was only about six inches away from that sheet, and we knew then that it would deepen. We made the decision to remove the sheet."

"In the past, we've left it on to try to prevent the silt settling beneath it. What happens, though, is that the sheet lifts due to the large amounts of water and the silt just settles underneath it anyway."

"Luckily, the water somehow remained on the primary wicket for only about four days, whilst other parts of the field took longer to recover." 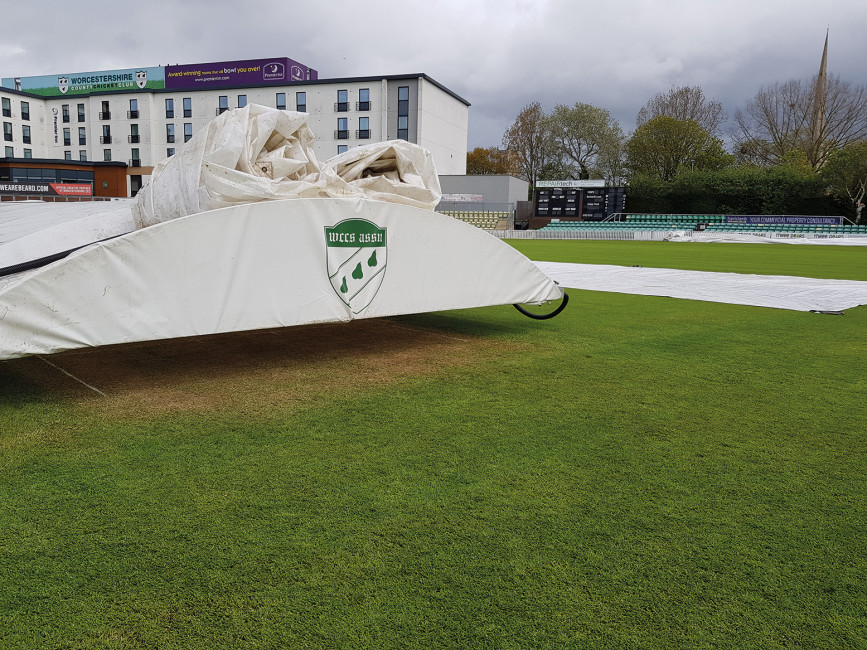 "We've just had to brush that due to the lower levels of silt than in the average year, but this is what usually constitutes a lot of our time."

"There was just the initial game of the season which had to be amended. The players had been in Abu Dhabi and had hardly played since arriving back,"

"What should have been an inter-squad game was changed to a friendly, two-day match against Gloucestershire CCC."

"Because of the encroaching water, we phoned Gloucs and asked them whether we could move it to their ground, which they agreed to do for one day. Ironically, we travelled down to Bristol and it rained, so they never bowled a ball!"

"Around day four, there's nothing we can do while the surface water is still prominent. We used the facilities at Royal Grammar School, Worcester instead, where Sean Lloyd and his team are always very helpful and accommodating."

"You're now into the period where their groundstaff are meanwhile trying to prepare for coming matches at the school, so the most useful thing we can do is to help them with their work."

"Our main priority when arriving back onto a now-accessible ground is to wash the shed. The water went ankle-deep, but we still had to hose it down and disinfect it, because you can't be sure what's washed up from all the places the water has travelled."

"You're tempted then to walk out onto the field and assess the damage. Our experience of other floods, however, has taught us that the longer you can leave it before you head out there, the better the results."

"You have to let it dry out. You do feel under some pressure to help it out, especially so close to the season. But, you can't give into that, because it won't help." "As summer draws in, you'd usually work on anything from a 14-day to 16-day preparation window on a First Class pitch. But, because we are on this flood plain, we need to work to a three-week window."

"We stayed off the field this year until the Wednesday. At that point, when the field is ready for us, the first method is to head out with the leaf-blowers and rakes to sort out any debris. I am also grateful to Bernhard & Company for the loan of a Turf Breeze"

"We also leave some extra time for the square to be accessible without making footprints. This is more delicate than the outfield, so requires more time."

"We had a new drainage system over three quarters of the field in 2007, so at that point the excess does drain away a little quicker than it used to."

"We used to have to leave it a week, perhaps even ten days, before tackling it. Now, it's around half of that time."

"That's an infiltration issue, because the water used to settle in the top ½-inch or so, whereas now it disperses through the soil more and we can get a roller onto it far sooner."

"We put the moisture metre into the wicket. On the Friday we used the roller, it was around 36% across the wicket. Normally, that's where you'd want to be at preparation time."

"It was probably still a week, however, after the water had fully left the ground, before we attempted to cut any of the outfield. Sooner than that can be damaging."

"When the ECB's Chris Wood came down during a severe flood in 2008, we were deliberating whether to seed the square, as we'd lose around 40% coverage. If there's no grass, of course, you can't prepare a wicket." "But, Chris has a probe which monitors Test wickets. He said the hardness and bounce was like a Test wicket about a week out from a match."

"So, the weight of water that sits on there helps with compaction and pre-season rolling. There are some benefits to the flooding too."

'Although the River Severn runs right past New Road, the flooding is actually activated a mile downstream where it meets its tributary, the Teme, from where excess water is sent back over the flood plain beyond the Diglis End of the ground and back up through the drains.

The flood in June 2007, when New Road lost all its home games over the second half of the season, was actually only the second worst - in terms of height - in the ground's 118-year history.

In the clean-up operation in 2007, the outfield was strewn with sewage. Some of the boundary boards floated off and were found a mile away.

Home games were hosted at short notice at grounds as far apart as Edgbaston, Kidderminster, Derby and even Taunton, over 100 miles away.

Himley Cricket Club and Flagge Meadow were also scheduled to host home limited-over matches - but both were 'rained off'.

Since 2007, Kidderminster, fourteen miles up the A449, has been the main stand-by option if New Road floods during the season, although Flagge Meadow has also had increasing use.'