0 Working on the PGA Senior Tour 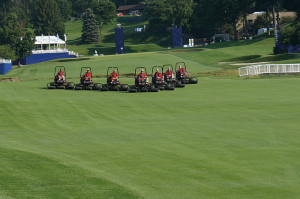 When Luke Dodge, Young Groundsman of the Year 2012, was given the opportunity to join the team at Fox Chapel Golf Club, Pittsburgh, Pennsylvania he couldn't refuse. He spoke to Kerry Haywood about his career and the preparations involved to host the 2014 PGA Senior Players Championship.

I decided I wanted a change of direction in my career whilst I was still relatively young, and I always wanted to experience working on a world class golf course. Therefore, when the chance was presented to join Superintendent Jason Hurwitz and his team at Fox Chapel Golf Club in Pittsburgh, Pennsylvania, I jumped at the opportunity.

Fox Chapel Golf Club was rated in the Top 100 Golf Courses in America for 2013 by Golf Magazine. I went via the Ohio State University program run by Mike O'Keeffe, a programme I know is very popular for British guys in the industry to gain experience in America.

Before this point, I had only ever worked on football pitches with my first job as a sixteen year old apprentice at Blackburn Rovers, under the guidance of Steve Patrick, and then Manchester City for Roy Rigby in 2011. It was at Blackburn I first heard of the Ohio State Program, as we had Ben Jackson over as an intern for four months. Both experiences were unbelievable and I learnt so much from some of the top men in the industry, and witnessed the phenomenal conclusion to the 2011/12 Premier League season. 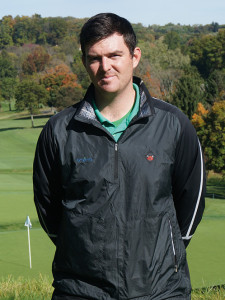 I arrived in Columbus, Ohio via a connection in Philadelphia on the 26th May. I spent two days there looking around the campus of an estimated student population of 56,000, (half the entire population of my home town, Blackburn). After a quick visit to see Ben Jackson, now in charge of the Columbus Crew's training facility, I made my way to Pittsburgh and my intern placement at the Fox Chapel Golf Club. I met with Assistant Superintendent David Aravich, who gave me a quick tour of the workshop and then on to the intern house I would be sharing with three other interns who work for the golf course.

Fox Chapel Golf Club is a classic golf course by all definitions. The course was designed by Seth Raynor and opened in 1923. He is one of the master architects from the golden era of course construction. Long time assistant to Charles Blair Macdonald, the father of American Golf, Raynor assisted with the design of legendary courses such as National Golf Links of America, Chicago Golf Club, The Course at Yale, Piping Rock, St. Louis Country Club,
and Shinnecock Hills Golf Club to name a few. Once on his own, Raynor designed nearly 100 courses, including renowned venues such as Camargo, Creek Club, Fishers Island, Mountain Lake, Old White, and Shoreacres.

Fox Chapel Golf Club is well-appreciated by fans of course architecture as Raynor incorporated nearly all of his unique features into the design. Characteristics such as the Punch Bowl, Eden, Redan, Cape, Alps, Short, Raynor's Prize and Biarritz are all present on the course. You may have to visit several other Raynor courses to find so many amazing design features all on one course.

The PGA Tour has also come to appreciate the Fox Chapel Golf Club. In late 2011, the Club and the Tour agreed to host the Senior Players Championship, one of the five major championships on the Champions Tour. The Championship was a great success in 2012 and 2013, with Joe Daley and Kenny Perry winning respectively. Upon my arrival, the 2014 Championship was little more than a month away. The course was taking shape and everyone was very busy keeping the course in great condition for the members, as well as carrying out extra duties that would be vital for the following month.

Only two weeks prior to the tournament, the course experienced 3.7 inches of rainfall in a thirty-six hour period, which meant a lot of work to bunkers was required; many of the ninety-three bunkers had some degree of washout. Everyone got stuck in and, within the day, the bunkers were back in play. 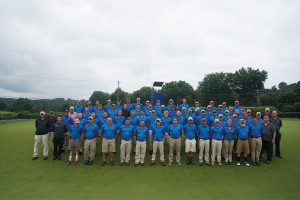 The team is led by Superintendent Jason Hurwitz, who was an Assistant Superintendent at nearby Oakmont Country Club before moving to Fox Chapel Golf Club. His three assistants are Dave Aravich, Ben Hewitt and Jaryd Kocher, who keep the rest of the team (and volunteers during Tournament week) in order and on task to complete the course maintenance to the highest of standards.

The week prior to the Tournament was used to get on top of any last minute tasks and to prepare for the following week. This included lots of miscellaneous tasks that helped the whole experience for us and the rest of teams working on the course, including television networks, onsite grandstands, tents and most importantly the spectators. The alarm was set for 3.15am on Monday 23rd June and it would remain that way all week, we got to the course for 4.00am with the morning meeting to start at 4.30am. Jason gave us our prep talk and our tasks for the day. I was operating one of the four Salsco greens rollers, along with fellow intern Tim Doherty and Assistant Superintendent Charlie Dickson volunteering from Belmont Country Club (next year's host of the Senior Players Championship).

Myself and Charlie had the front nine, whilst Tim and former Fox Chapel employee, Nate Szymkowiak, had the back nine, although we would usually cross over and do a few of each other's greens due to the layout of the course. This meant that Charlie and I usually finished on the 17th Biarritz Hole with a huge swale in the middle of the 68 yard long green. For the most part, we double rolled greens and approaches twice a day, with the exception of the third green where we only rolled on the evening shift, due to the severe slope on the front of the green. A typical day ended with most tasks being completed between 8.30-9.00pm, although Wednesday night we were still rolling and spot fly mowing some bunkers up to 10.00pm.

The remainder of the people were on bunkers am and divot team pm. Along with this, we had three mechanics, three assistant Superintendents and Jason with PGA Tour Agronomist Jay Sporl. We had our Poa annua/Bentgrass greens cut at 0.086 inch during the Tournament week. Tees and approaches were cut using Toro 1000 walk mowers at 0.350" for tees and 0.300" for the approaches. The fairway team, using the John Deere and Toro mowers, were cutting at 0.400", with them cutting all in one direction; the morning was towards the green and, in the evening, back towards the tee. This was the same every day they cut. Intermediate was only one width of a Toro 3100 triple and was cut to one inch. The rough inside the ropes was at three inches, and outside the ropes it didn't get cut all week.

A shotgun competition on the Monday, and a Pro-Am on the Wednesday, kept everyone on their toes in the build-up to the main event from the Thursday morning. Everything was going great until the Tuesday night when, during our evening shift of work, we were hit by an hour long storm that meant we could not complete our work for the night due to the 0.92" of rainfall we received.

Wednesday morning rolled around, and it was a case of assessing any damage to the course and any potential areas that were deemed unfit to operate any maintenance equipment on. Mainly fairways and some tee boxes were not fit enough to be cut that day, and the 14th fairway was not fit until the evening cut. Bunkers needed touching up to repair some slight washouts, but nothing major. We managed to attain around 13 feet on the stimpmeter on Thursday and, by the end of the week, we were closer to 15 feet on all our greens.

We had one slight emergency during the Tournament as a player holed his second shot on the short par 4, 12th. This resulted in the hole being slightly damaged and in need of a quick repair. An intern, and one of the set up guys, Chris Larson, was called in to carry out this task. We also had a visit from golfing great Hale Irwin, who spent time discussing the course, along with answering a few of our questions.

The Tournament started well, and good weather was forecast for the majority of the four days, with the exception of some heavy showers popping up very rarely. Scoring was good the first day as the greens were still a little soft following the rain, but we knew the greens and the rest of the course were only going to get drier and firmer from then on. Scoring continued to be strong on the second day and, by the weekend, it was still very good but not as consistent. Bernard Langer was leading for the majority of the Tournament and was in a relatively comfortable position going in to the last round. On the back nine of the final round, he stumbled a little, which resulted in a playoff with Jeff Sluman. Langer was finally crowned Champion after the second play-off hole.

On the whole, the week went well and everyone involved should be very proud of what they achieved. I have to say a massive thank you to Mike O'Keeffe and Jason Hurwitz for giving me this opportunity to be involved at such a great golf course and to learn more valuable skills to help me in my future career. Jason and his team should be very proud of the golf course they work on; I certainly am enjoying my time here in Pittsburgh.