by Jane Carley
in Hockey, Synthetics, and Schools & Colleges
on 06 Nov 2021

Nestling between the second city's Victorian landmarks and the more modern developments of this bustling metropolis, the University of Birmingham might seem an unlikely venue for a world-class sports pitch. 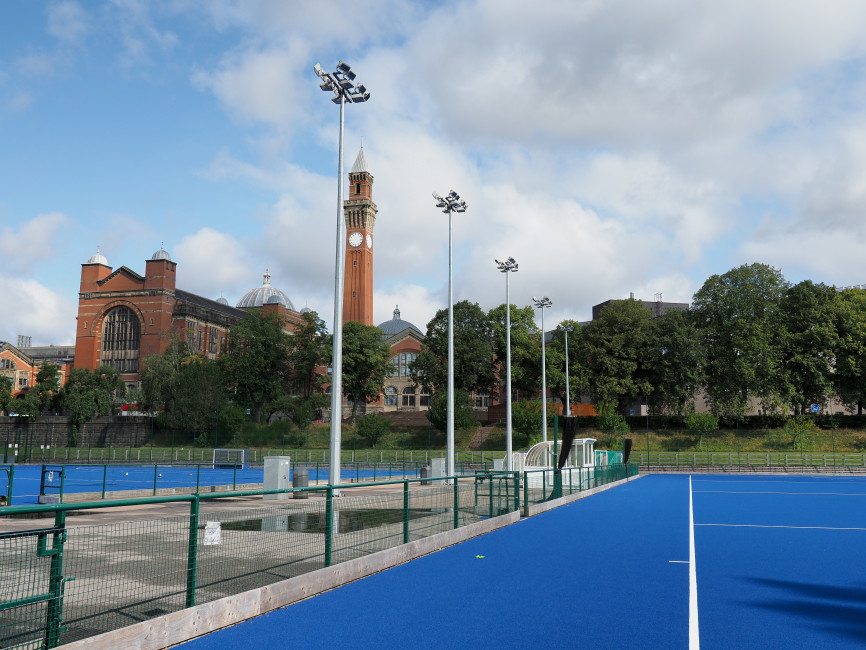 Renovations by McArdle SportTec have included swapping the formerly red run-off areas to blue carpet, in line with FIH requirements

Yet its history proves otherwise. The University of Birmingham Hockey Club is the most successful university hockey club in the country. It has twelve teams - six men's and six women's teams - all of which compete in England Hockey's National, Regional and County leagues and in the British University and Colleges Sport leagues. The University of Birmingham's Women's Hockey team are in the Investec National Premier Division. The Club has a number of international players representing the University - notable club alumni include Lily Owsley MBE and Sophie Bray MBE, Rio Olympic Gold Medallists (see panel for more details).

"We've worked with the University of Birmingham for more than thirty years, and we have a team which specialises in 3G pitches, mainly football but also hockey," explains Dave Harris, Project Manager at RLF. "We oversee the building of facilities, whether they be for hockey, rugby or tennis and produce a maintenance plan." 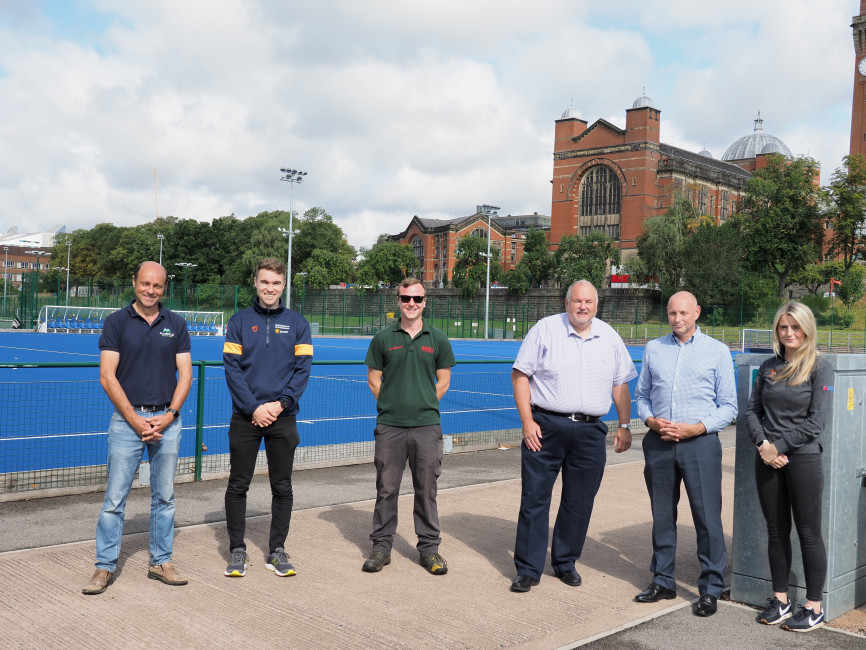 Richard Thornton, Contracts Director at McArdle, explains the history of the pitches:

"The site was previously home to two AstroTurf pitches installed by McArdle Sport Tec in 2009. In 2017, the decision was taken to refurbish the two water-based hockey pitches, incorporate an additional 3G pitch, ten tennis courts and additional parking facilities. The increase in sporting facilities on the site, whilst maintaining the same footprint, was achieved by rotating the existing pitches through 90 degrees. The previous carpets were recycled, either for equestrian use or smaller facilities."

"It's a TigerTurf Wett Pro carpet which is made in Kidderminster," comments TigerTurf marketing manager Jess Finnegan. "Sand dressed surfaces are still used for hockey, but a wet system is preferred for elite sport as it offers a grain-free playing surface that allows the ball to travel smoothly in all directions and the hockey player to pull the stick in all directions without noticeable grabbing or catching of the stick. Correctly maintained, the carpet lasts around twelve years." 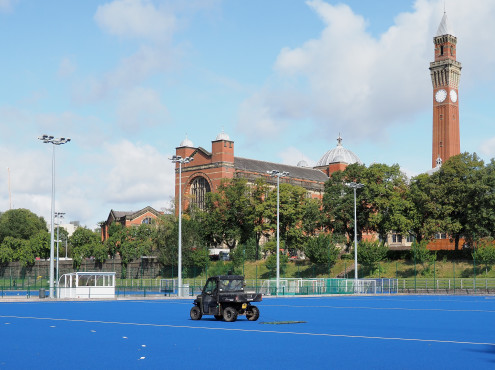 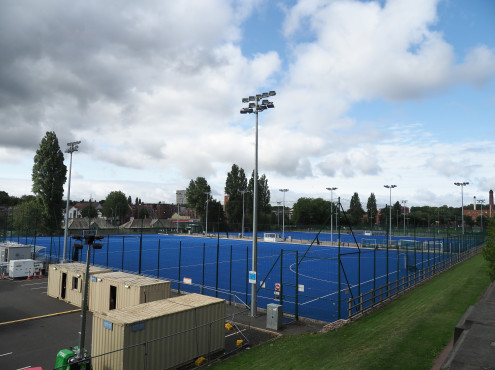 With the iconic University buildings as the backdrop, the water filled pitches are maintained by groundsman Alex Robinson / Car parks in the foreground will be restored in 2022 having played their part as a Covid test centre

The University of Birmingham's hockey pitches have recently been upgraded once more, as Richard sets out:

"The most recent renovation for the main part of the pitch was simply a matter of lifting the surface and checking the quality of the existing shockpad and whether repairs were needed before independent inspections were carried out."

"We have extended the carpet into the run-off areas which were previously surfaced with a macadam product. The pitch run-offs were originally red, but the whole area is now blue to meet with FIH Category 2 requirements."

"Specification even comes down to the exact shade of blue, which is also important for TV cameras. The pitch marking lines are woven in, using the same yarn as the rest of the carpet for consistency."

Routine maintenance is carried out by the University team, as groundsman Alex Robinson explains: "We remove leaves and debris with a blower and use a dragmat on the carpet three times a week, with Technical Surfaces contracted to carry out a deep clean with a vacuum every six months."

Pitch watering is mainly carried out by the sports staff to ensure the right amounts of water are applied for the final playing surface required; when the centre was closed during Covid, watering continued to take place to avoid a build-up of Legionella in the system. It is also routinely tested for Legionella every two years.

The rejuvenated pitches reflect the pride and importance being attached to the sport of hockey, where home-grown - and locally trained - athletes are recognised as among the best in the world. 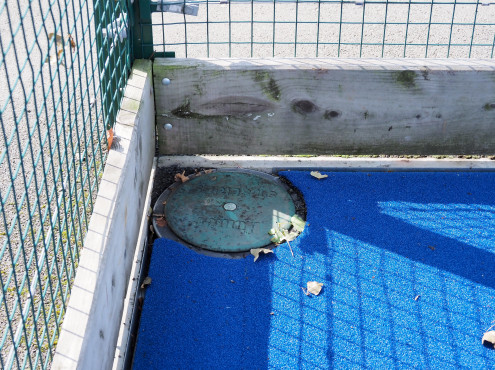 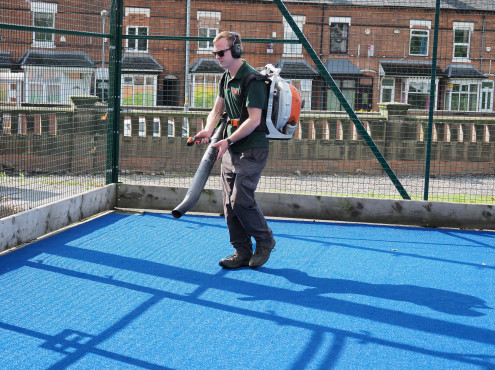 Water is piped onto the pitches from manholes at the corners, with the applications made by the sports staff to suit the requirements of training or matches in question / Blowing debris off the carpet: the proximity of the houses in the background reveals the pitches' urban setting

There is a huge range of outdoor facilities on and off-campus including bespoke hockey pitches, netball and tennis courts, and multi-sport grass pitches. The University maintains strong partnerships with local sports institutions.

There is also an offsite outdoor activities centre - the Raymond Priestley Centre.

The University has 56 student sports clubs, from American Football to Ultimate Frisbee, with over 4,500 members. 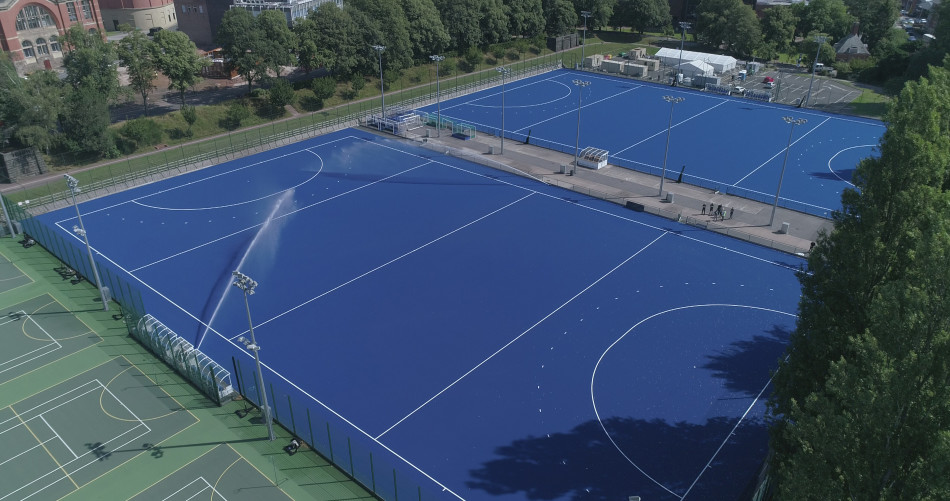 The University is a frequent British Universities and Colleges Sport (BUCS) medal winner (individual and teams) - 7th in BUCS rankings for 2019.

There are opportunities for everyone from beginner to elite athlete and a dedicated performance centre provides expert support to elite student athletes.

A vast range of sports volunteering opportunities are offered throughout the academic year, including major events.

Notable sport alumni of UoB include:

• Hannah England - Hannah is a professional 1500 metre runner, who in 2011 was crowned silver medallist at the IAAF World Championships in Daegu. She also competed for Team GB at the London 2012 Olympics

• Non Stanford - In 2012 she won the ITU Triathlon U23 World Championships, the next year going on to win the World senior title, the first woman to step up and achieve this feat