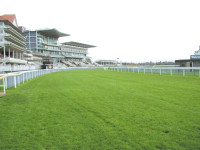 York Racecourse is thrilled and honoured to have been voted "Racecourse of the Year 2009" by members of the Racehorse Owners Association.

Michael Harris, chief executive of the Racehorse Owners Association, said: "It comes as no surprise that our members have chosen York as their 'racecourse of the year' for 2009, and we offer everyone at The Knavesmire our hearty congratulations. York is a superb racecourse and is one that provides outstanding prize-money and excellent facilities for racehorse owners."

"York is held in high regard across the whole horse racing industry and has already been given the ROA Gold Standard, which is an award that recognises overall excellence in the raceday experience not only for owners, but also for their horses and the stable staff of their trainers."

Speaking on behalf of the team at York, William Derby, Chief Executive and Clerk of the Course, said," we are thrilled and honoured to be voted 'Racecourse of the Year 2009' by members of the Racehorse Owners Association. Racehorse owners are the single biggest investors in British Racing and we are hugely appreciative of their enthusiasm and commitment to the sport and racing at York. We have been privileged to see some of the best flat horses in Europe compete on the Knavesmire and will continue to invest in prize money, facilities and the raceday experience to attract the very best horses to run at York."

"It gives us special pleasure to win the award in the season that has seen the benefits of the £2.5 million investment in the racing surface, as well as a record level of prize money exceeding £4.7million. During this winter, with the support of the Levy Board, we are investing further in our facilities for owners with a runner at York by increasing the size of our Owners' Lounge and making it lighter and brighter."

"We very much value and appreciate the work of the ROA Executive and Council in working with us to help deliver the best of experiences for owners and their horses visiting York."

"I would like to thank and pay tribute to the whole team at York who, like others in racing, work so hard to deliver successful and enjoyable racedays. I also feel a great admiration and respect for the team at Newbury who have won this award for five consecutive years - a truly remarkable feat."

The 28th staging of the awards dinner, this year supported by leading online bookmaker, Sportingbet, was held at London's Park Lane Hilton on December 3rd.

The prestigious awards celebrate the star horses of the season and the racing public of York have seen several of the winners in action over the season.

Sea The Stars was named ROA/sportingbet.com 'Horse of the Year'; the Derby winning colt also won York's most valuable race, the Juddmonte International on a memorable day at the Ebor Festival. Further Yorkshire success came for Wetherby based Borderlescott, already acknowledged as the fastest horse at York, after winning the Group One Coolmore Nunthorpe Stakes, the Robin Bastiman trained colt picked up the title of 'Outstanding Sprinter'.