At Thirsk Racecourse, the goal is to offer racehorse trainers a chance to run their horses on a reliably decent racing surface, while providing owners and racegoers with an enjoyable day out. Jane Carley talks to Clerk of the Course James Sanderson and Head Groundsman Steve Kelsey about the ongoing work 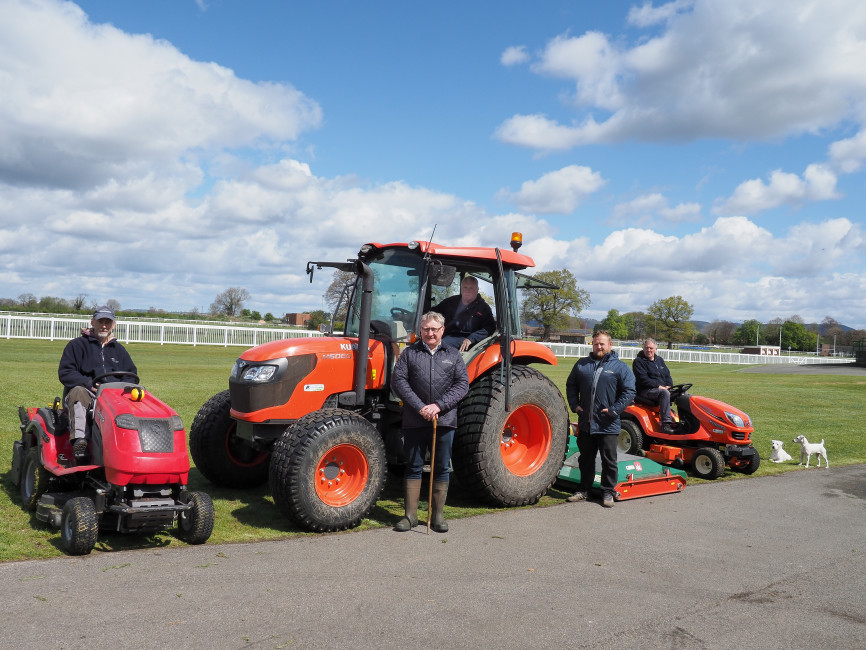 The track at Thirsk Racecourse is a 1.25 mile left-handed circuit with few undulations plus a six furlong chute. It was founded in 1855 by the Bell family, owners of Thirsk Hall Farm, who are still the racecourse's landlords.

"Our programme is mainly class 4, 5 and 6 races, so the lower end of the industry, but we aim to offer the highest possible standards, whatever the class of horse," explains Manager and Clerk of the Course James Sanderson. "We're halfway between the Yorkshire training bases of Malton and Middleham, and draw on that substantial regional pool of horses, so we usually have plenty of runners."

They also come from far and wide - Thirsk's richest race of the season, the £50,000 Cliff Stud Thirsk Hunt Cup, in May, was won by Stortford, a horse from Lambourn trainer Mick Channon's yard.

With gravel subsoil, the track has no need of artificial drainage, and even in the worst of the weather, the surface copes admirably.

"It will take rain all day," James comments. "I've been here ten years and only lost half a day's racing in that time."

That was, he recalls, the first day of a two-day meeting, when jockeys reported horses slipping on the bend into the straight.

"We had a morning drizzle on good-to-firm ground and it got slippery. We abandoned the first day after three races, slit both bends and then watered overnight, after which we were able to race with no problems the following day. We believe that lush grass contributed to the problem, so we're always mindful of grass growth." 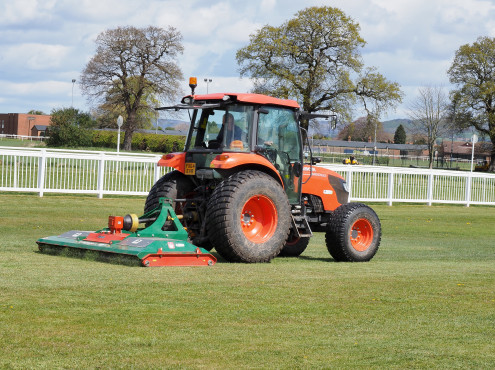 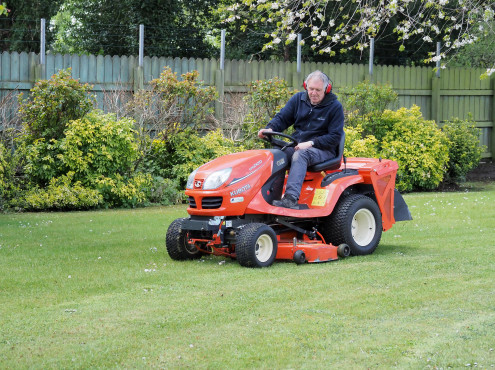 Mowing of the track and enclosures currently involves a tractor mounted roller mower or gangs, but a front mount mower or wide area ride-on is also under consideration / Ride-on mowers come in handy for lawns and also for cutting along the rail

Other works have included addressing a reverse camber and levelling the entry and exits of bends.

"Over time, the divot repairs and filling work can change the profile of a track, in a similar way to how take offs and landings get built up on a jumps course, so we have to work to keep it level."

Head groundsman Steve Kelsey has been at Thirsk for 40 years, so has seen a few changes in his time, including the introduction of pop-up sprinklers, making an important contribution to watering efficiency.

"They are very reliable - you can put water on at night and know it's going to be effective, without burning off as it does in the day. It's much more efficient than booms and tow lines; between 6.00pm and 6.00am we can get at least 6mm on if we need to and be confident to produce decent ground."

A calendar which lasts from April to September makes it easy to get on with post-season renovations early and achieve good recovery, James comments.

"It soon looks very good, although the cold temperatures in the early part of this year put the grass back."

Key to renovations is a thorough grass harrow to pull out debris, followed by a vertidrain carried out by contractor Cleveland Land Services, who also takes care of overseeding.

"We reason that any seasonal work is better done by a contractor rather than investing in specialist machinery," comments Steve, "It's the sort of equipment that deteriorates quickly if you are not using it regularly."

Contractors are also used for spraying - the end of May is a key time for getting on top of Chafer Grubs with the emergency use authorisation for Acelypryn, followed by a herbicide application. 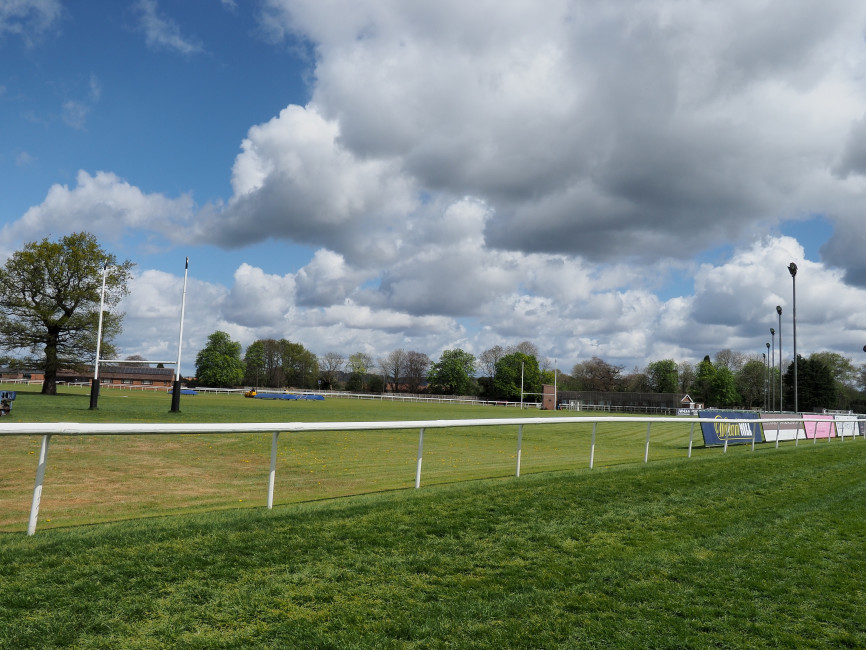 Centre course is home to the local athletics club, with facilities for football, rugby and cricket rather than athletics!

"We've been lucky not to have issues with Chafer Grubs on the track itself, but they are on the adjacent football field, so we're mindful of the challenge that they pose. Acelypryn is more expensive than Imidacloprid, which we used before it was taken off the market, and the timing has to be just right; we're not confident in the use of nematodes which is the alternative. Racing represents the majority of our income, so we can't risk losing fixtures."

Granular fertiliser is applied in three cycles a year, and after an early spring application this year, a second was needed in May to give a boost due to the cold temperatures.

"We're careful with fertiliser as we want to avoid lush growth which can lead to the surface becoming slippery," says James.

Mowing is carried out with either Lloyds gangs or a Wessex roller mower - which also comes in for striping larger formal areas such as the family enclosure - cutting to 4in to give a generous sward on the track.

"Even for flat racing, trainers prefer to see plenty of ground cover and it helps maintain genuinely good going in drying winds," he comments.

And there's plenty of grass to cut: 5ha of track and another 3-4ha of lawns, parade rings and grass car parks.

"Although we do also have some very environmentally friendly mowers in the car parks, in the form of sheep provided by a local shepherd," James points out. 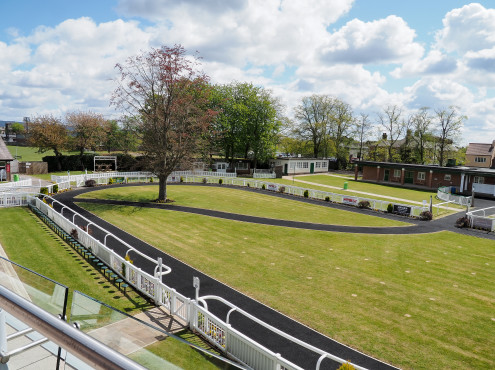 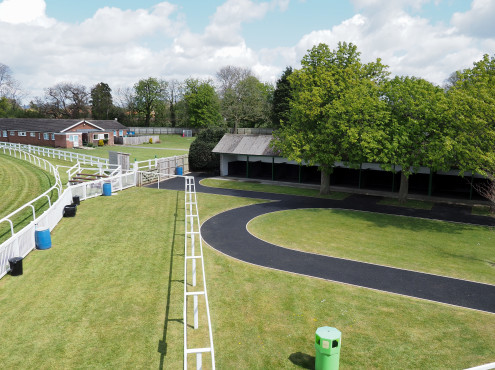 Mowing methods are a talking point between James and Steve. The two tractor drawn mowers are pulled by a 60hp Kubota M6060 which is the track's all round workhorse.

But two older tractors - including an MF135, much prized by the enthusiasts - are up for replacement soon and local dealer Russells may be called upon to quote for a slightly lower horsepower model to complement the existing Kubota.

"We've talked about using it to mount a front mower so we're not running over the grass before cutting it, but wide area ride-ons are popular with many racecourses, so it's up for debate. We've been offered extra tax relief as part of Covid recovery schemes so it's a good opportunity to update machinery."

With many restricted areas to tackle, small ride-ons are an important part of the armoury. A Kubota GR has replaced an old Countax and will soon be joined by a second.

A Dakota Turf Tender spreader also comes in for praise.

"Previously, if we identified an area that needed sanding, it was a matter of shovelling it on," comments James. This is much quicker and more efficient."

Steve is handy in the workshop, looking after routine maintenance alongside a local engineer and has modified a Trilo trailed vacuum for a particularly labour-intensive job.

"We have 113 stables which are bedded on shredded paper or wood shavings, and it all has to be removed after every meeting," explains James. "The vacuum's engine was beefed up, then the chute was removed and swapped for a long hose to suck the used bedding straight from the stable into the muck trailer." 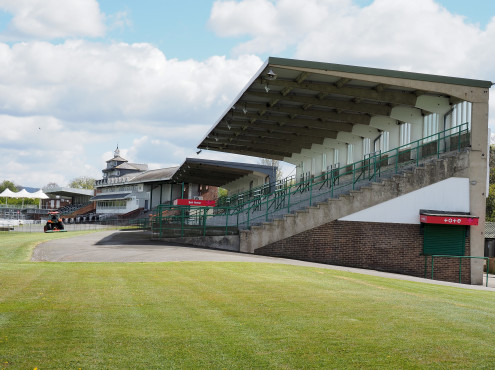 The Polaris Ranger UTV is a useful piece of kit for moving people and equipment, especially on race days, he points out.

"I don't want for anything in terms of machinery," comments Steve, "The slitter's next for replacement, but otherwise we're well equipped."

"We move rail if the ground comes up soft which is a big job for our small team, but we were fortunate that it wasn't necessary this year for our first three meetings as the going was good-to-firm and there was minimal damage."

Rail comes from Watt Fences plus Duralock for paddocks and, although Thirsk has a rolling replacement programme, Steve reckons it's a good investment.

"It deteriorates in the sunlight, but I reckon the rails going out of service are some twenty years old. And then they still get re-used, there's always a trainer or point to point course that wants them!"

It's obvious that Thirsk racecourse is run as an efficient machine, delivering a sterling service to the strong Yorkshire racing scene and beyond, and with a team that prides itself on high standards. 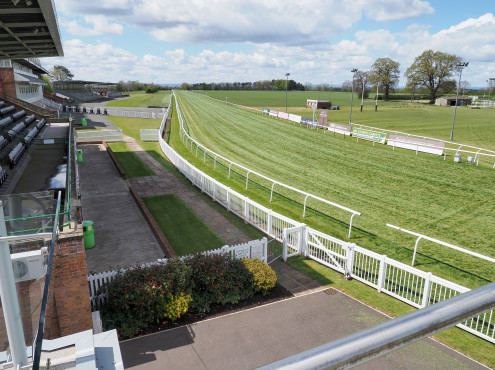 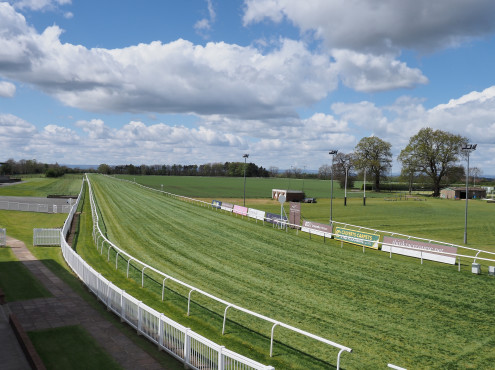 Two views of the home straight

Thirsk welcomed its first spectators back at its meeting on 3rd June and has plans in place to grow the numbers after 21st June, subject to Government rules.

"We would normally have three enclosures but we started with just the one and at 25% capacity," explains James. "Everything is outdoors, although there is protection from the weather with marquees and the grandstand roof. Racegoers can use socially distanced queues to buy drinks and then must take them to a table and sit down to consume them."

"For indoor areas, such as dining and boxes, we again work at reduced capacity to maintain social distancing."

Owners - who have been unstinting in their support of Thirsk and other racecourses, regardless of how their race day experience has been affected by the regulations - are currently entertained in a pavilion with an adjacent covered lawn, whilst their new £1.8m trackside stand, completed in 2018, is redesignated as a jockeys' changing room.

"Under Covid-19 protocols, the capacity of the main changing room has been reduced to just eight jockeys," explains James, "Pre-Covid, we could accommodate thirty in there quite happily, but social distancing meant we needed more space, so we've had to use the new owners' stand."

Despite all the challenges, he is confident that demand for racing will be as high as ever in the coming months.

"Ticket sales have been strong since we announced the date for spectators to return," he comments. "Restricted room capacities mean people will be outside more and so we've suggested that racegoers always dress for the weather; but, whatever the conditions, we'll still be able to offer owners and racegoers alike a great experience."