0 You name it, I do it at Redcar Athletic

The club was established in 1993 as Teesside Athletic and initially played in the Teesside League. In 2005, they joined the Wearside League and, in 2010, the club's name was changed to Redcar Athletic. They finished as Wearside League runners-up on three occasions before finally clinching their first championship in 2018, thereby enabling them to win promotion to the Northern League. Lee Williams met up with their Head Groundsman, Paul Wilson. 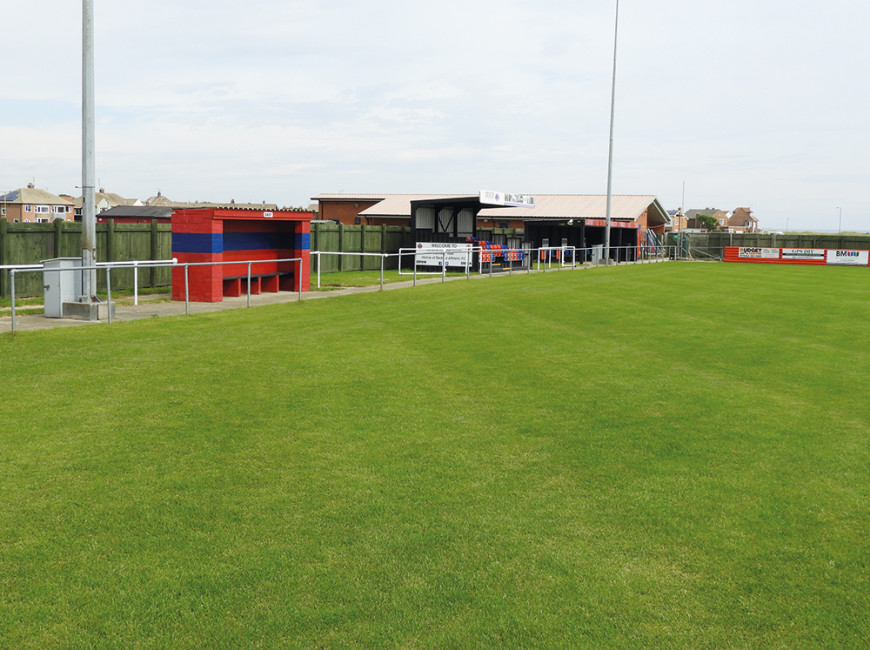 Paul Wilson is responsible for looking after fifteen acres of land, which includes the main match pitch, three full-size pitches and four development pitches for the juniors which he mainly does by himself. Paul explains, "I do get a few helpers now and again if I'm struggling, but not very often. I cut the pitches and mark them out, but my responsibilities also include the management of the clubhouse; looking after the cleaning and maintenance. My wife, Linda helps out a lot with the cleaning and the café - which I'm the manager of at the weekend, as we are open Saturdays and Sundays for football. You name it I do it."

Paul is a former fisherman who had his own boat fishing off the coast of Redcar. But he has always had a love for football and first got into groundsmanship ten years ago after doing his football coaching badges. "I got involved running a junior and senior team here at Redcar; I used to help the groundsman out who was getting too old to carry on and had a lot of health issues. When he packed in, the club had no one to take over his role and they depended on volunteers to prep the pitches. At this time, I still had my own business as I owned a fish and chip shop, which I purchased after I retired from being a fisherman. Then, in 2009, I sold my chip shop and took up the full-time role here, to pursue my passion for football and groundsmanship. I have not looked back."

Since Paul took on the role ten years ago, he tells me how, at the beginning, it was a real struggle, and he had to be 'creative' with the limited funds available to him. "I used to cut all the pitches with a Saxon Baroness triple mower; that is all I had, alongside a fork and a rake! I needed a brush, so I built my own for the back of the triple, which I used to groom the pitches in winter. Since the early days, the club has progressed and invested in more machinery and equipment." 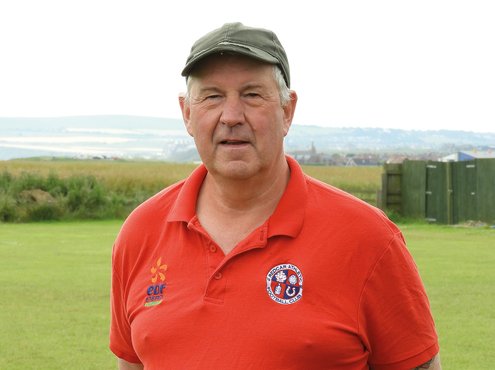 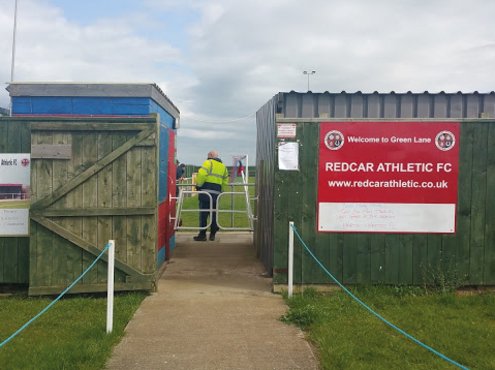 Paul controls the budget for the playing surfaces, and he does his best to get the most out of what he is given. "I get a budget from the senior section. I was fortunate to get £4,000 a year, but that has just gone down, believe it or not, to £1,600 for this season as the club want to channel what they have into getting promoted. I want what is best for the club, so I will cut the cloth accordingly. I'm fortunate that we have outside football tournaments that take place, so any profit I make from the café at the weekend the club let me put it back into ground maintenance."

Paul has taken advantage of the FA Pitch Improvement Programme to help improve his knowledge of professional groundsmanship. "I went to all the courses that they put on at North Riding FA. I have completed my Level 1, 2 and 3 Winter Pitch Maintenance as well, which has helped me improve the playing surfaces in the last few years."

"In 2017, I was nominated by the club for Groundsman of the Year for the North East Region. The judges visited, looked at the pitch and I answered all their questions. I didn't think anymore after that for months.

I then received a letter telling me I had won. From there, I was entered into the National award, where I went down to St George's Park and, lo and behold, I won Step 7 National Groundsman of the Year, which was a very proud moment for me. I believe this coincided with the Pitch Improvement Programme and getting further education, plus working hard; the club is moving forward."

Recently, Paul has had a knee replacement operation which has, unfortunately, meant that he couldn't take out a thorough renovation on the main pitch this summer but is grateful to his volunteers who stepped in for him while he was away. "We have a drop-in centre here at the club on a Thursday and two or three of the guys, who are ex steelworkers in their sixties, have got involved, and they love it. Richard Green has been cutting the pitches, Peter Millburn has been cutting and marking out and Roy, John and Swifty have been painting the fences and turnstiles and carrying out any general maintenance jobs for us. I can't thank these guys enough for stepping up while I recovered from my operation. Due to me only coming back full time recently, I have had to let the main pitch recover naturally, alongside spreading one tonne of sand across both six yard boxes, plus a light overseed. Hopefully, next year we will be able to Koro off the pitch."

Most of the pitches are ex-council playing fields which the club inherited and still have public rights of way running through them. "The pitches are basic soil construction and, as far as I'm aware, there are no main drains. However, during the war, the land was used as a prisoner of war camp, so in places, I do hit some areas at 10 inches down with the Verti-Drain, which could be old drains or manholes. They do drain well and it is not very often we have games called off."

"My main pitch is soil-based but, over the last three years, we have applied sand during the renovation. There are no main drains, but I did have a problem at the north end off the pitch when we had a heavy downpour of rain; it would accumulate behind the goal then spread back up the pitch. So, I took it on board, two seasons ago, to dig a drainage channel from one end of the pitch to the other, using a 360-degree digger, and had it fall out through the fence which has worked brilliantly." 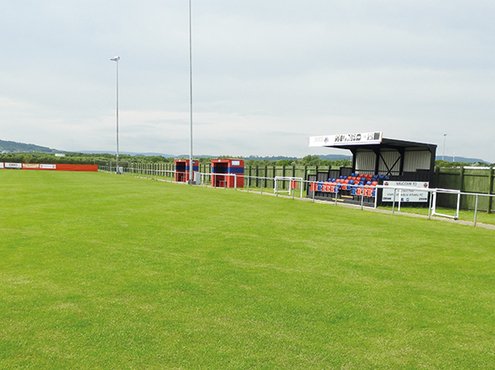 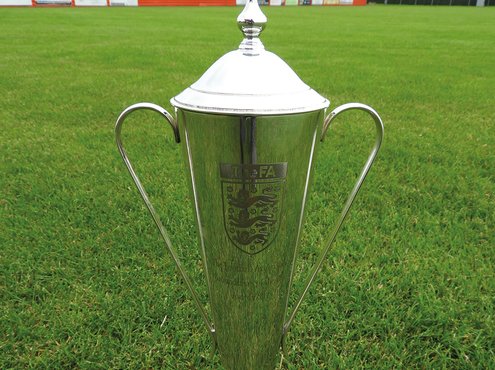 At the side of the clubhouse, I noticed an IBC on a trailer next to some hose, so I asked Paul what it is used for. "That is my homemade irrigation system which I tow on to the pitch, I then have a pump and a tripod sprinkler which I attach to the IBC full of water. The sprinkler will throw the water out to twenty-five-metres radius and empties in fifteen minutes. What I did this year was drop a wetting agent tablet in it, let it dissolve then water one half of the pitch and the other half the next. I will also use it on matchdays to try and slicken up the surface for the players."

Paul talks me through the maintenance of the pitches. "I cut most of the ground at 25mm in the summer and lift to 30mm in the winter to give it some protection. I use the tractor-mounted Trimax rotary mower. It saves me a lot of time and it stripes them up beautifully and, in fairness, I do use it on my main pitch quite a lot. I like the way it trims the grass up after I have it cut. It stands the grass up nicely. On the main pitch, I will also use the old Ransomes Mastiff from time to time. I would like to use it more often, but the problems with my knee have limited this. It's a bit of a boneshaker, but it does a class job."

"I tend to cut the main pitch three times a week. After a game I will go over it with the SISIS Quadraplay and give it a light rake, then I will go over with the SISIS LItamina to clean up the surface. I have recently purchased a second-hand Charterhouse Verti-Drain which now gives me the option of putting an aeration programme in place; I hope to get all the ground opened up at least three times a year, at a depth of eight inches." With Paul having a limited budget and no irrigation system on his main pitch, he takes advantage of slow-release products.

"I will use 5-6-month slow release Sierrablen at the beginning of the season, then again in September. I will use a conventional winter feed in December and, if possible, I like to apply some seaweed and chelated iron to help strengthen the grass plant in the growing season. It all depends on the weather. I found it was still quite mild in December last year and I was still cutting, so my winter feed went down a bit later."

Since Paul first took on the challenge ten years ago, his machinery list has improved significantly. "We received £10,000 in funding from the FA and money from the SITA Trust. This enabled us to purchase a brand-new tractor and various other pieces of machinery which have helped me provide better surfaces for the club and make the job that bit easier. I service all the machines myself, which helps reduce costs. The only thing I can't do in-house is regrind the cutting cylinders. I take them to a local gentleman up the road; Peter James."

SITA Trust is an ethical funding organisation dedicated to making lasting improvements to the natural environment and community life. The Trust is a not-for-profit company, a registered and accredited environmental body that operates under the Landfill Communities Fund distributing funds contributed by the recycling and resource management company SITA UK.