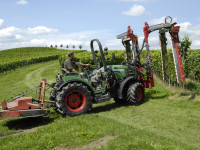 With the introduction of the 200 Vario, Fendt now drives 100 percent stepless from 70 to 360 hp and thus offers one uniform drive concept across all power classes. Since the introduction of the Vario transmission in 1995 in the Vario 926, the top model at that time, the multiple award-winning drive technology has established itself around the world and convinced customers 100,000 times. Vario is the synonym for continu-ously variable speed adjustment - the perfect combination of efficiency, operating comfort and driving pleasure.

From the idea to the convincing reality

The first ideas for a stepless transmission go back many years. Ahead of his time, Fendt development engineer, Hans Marshall, already developed the first conceptual ideas back in the 70's. In 1988, the decision was made to bring it to series production readiness. The success story of the Vario transmission began when the top model, the 926 Vario with 260 hp, was launched at the Agritechnica in 1995. First it provoked fierce discussion all over the industry and many doubted the high efficiency and prospects for success of continu-ously variable transmissions for tractors. Today, more than 14 years and 100,000 Vario transmissions later, there are no more doubts regarding this Fendt development.

Only Fendt can offer the unique experience gathered from more than 100,000 Vario transmissions. After the 900 Vario range was launched, the Vario transmission technology, with all its advantages, was transferred to the other tractor ranges bit by bit and continuously refined. With the introduction of the 200 Vario, Fendt now drives 100 percent stepless from 70 to 360 hp and thus offers customers a uniform transmission concept across all power classes. During the entire development process of the Vario transmission, the engi-neers always focussed on keeping the overall vehicle concept in the fore-ground. Therefore Vario not only offers continuously variable speed adjust-ment and maximum cost-effectiveness, but also the matching logical and er-gonomic controls and the highest driving pleasure to go along with it.

With Vario there are no gear steps or interruptions in pulling power, which allows power reserves in the areas, were the steps would have been, to be mobilised. Fendt Vario tractors always drive at the optimum working speed during all kinds of specialty work - from 20 metres per hour to 60 kilometres per hour. The intelligent engine-transmission management system enables top speeds at significantly lower engine speeds - the basis for lower fuel con-sumption.

The other essential components that make the Vario tractor so economical are the highly efficient engines, which have been designed for uncompromising performance and low fuel consumption. Only engines with the best available technology, such as common rail injection, externally controlled exhaust gas recirculation or lower rated speed, find their way into Fendt tractors. Like in the new 800 Vario, which is equipped with the first AdBlue engine technol-ogy and therefore already complies with the emissions standard Stage 3b/Tier 4 interim one year before required by law. For Fendt, another decisive factor when selecting the right engine is an optimised cubic capacity along with the appropriate turbo technology. Brand new for the new 800 Vario is a turbo-charger with an electrically controlled wastegate. It boosts power and reduces fuel consumption at the same time.

The increased efficiency of a Vario results from the fact that the engine can always be run in its economically optimum range. Fuel costs are the largest cost factor over the entire service life of a tractor, with a share of up to 60 percent of overall costs. The cost of fuel is therefore the decisive factor in cost leadership. Fendt makes no compromises when it comes to this key issue. Numerous, neutral tests impressively show how fuel-efficient Fendt Vario tractors are and how high the efficiency of the entire drive train is.

At Fendt efficiency and driving pleasure are no contradiction, because Vario not only stands for continuously variable speed adjustment and a highly effi-cient drive train, but also for exceptional operating comfort and greater driv-ing pleasure. All Vario tractors can be driven with the same uniform operating logic. The central operating element is the multi-function joystick or the sim-pler Variostick. Having to control a large number of shifting levers has been a thing of the past for a long time at Fendt. With the introduction of the 700 Vario range in 1999, Fendt also took on a pioneering role regarding operating comfort. For the first time it was possible to make all settings and adjustments using a screen in the cab, the Varioterminal.

To mark this historic occasion, Fendt will give away a tractor from the new 200 Vario range in an anniversary contest. More information at www.fendt.com.