0 A window of opportunity at Cranfield United FC

A rather excitable Lee Williams headed to the village of Cranfield, a few miles east of Milton Keynes, for his first face-to-face site visit since lockdown restrictions were relaxed. He was here to meet Wesley Matthews - at a safe distance, obviously - the award winning groundsman at Cranfield United Football Club. 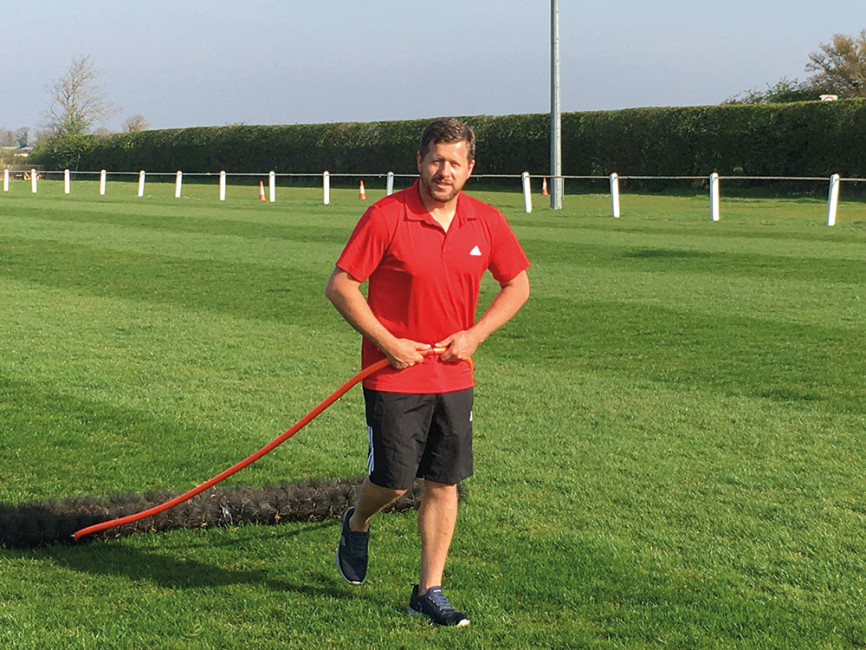 Cranfield United Football Club was formed in 1903 and has spent most of its history playing in the local leagues. They are currently members of the Bedfordshire County Football League Premier Division. They play their home games at Crawley Road, at the end of the Cranfield Airport main runway and just a stone's throw from Cranfield University.

Lee takes up the story. This was my first face to face visit since February, with the restrictions being eased at the end of May, it was great to get out. Following the government's guidelines, Wes and I kept at a two-metre distance and conducted the interview outside the clubhouse, luckily it was a nice day.

Wesley's full-time occupation is running his own double-glazing business - Kempston Windows Ltd. He uses his spare time in between calls, and in the evenings, to tend to the football pitch which, he says, helps to clear his mind. "I'm not so much on the tools now; I spend a lot of my time doing surveys and quotes. I have found myself doing a lot more evening work as people are at work during the day, which has given me a bit of time in the day to work on the pitch. I use that time to break up my week, and it's nice to come down to the pitch and walk with the brush, mark out etc. When you run your own business, it can be quite stressful, especially when there is a lot is going on and you are the centre of everything. As strange as it may sound to some people, I find coming up here for four to five hours during the week, divoting or doing 14,000 steps helps clear my mind and sets me up for the rest of my appointments." 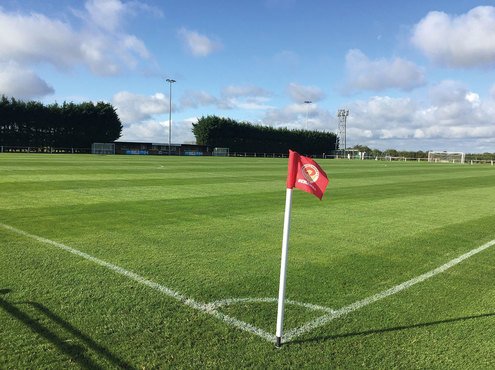 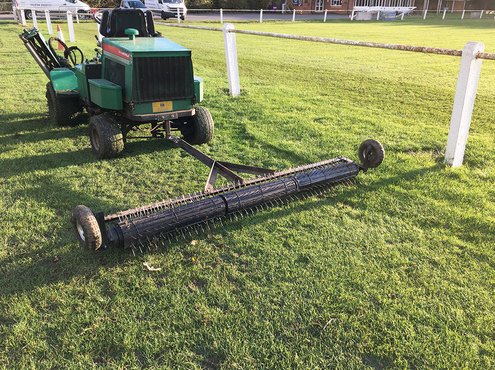 Wesley first found himself on a mower at Elstow Abbey Football Club in Bedfordshire where he was manager/player in 2015. He tells me the players were moaning about the quality of the pitch as it was a bit long and it was not looking the best. "I found myself getting involved, and it turned out the guy who was doing the cutting was struggling through ill health. It needed someone to turn the pitch around. So I said to the players 'give me the mower, and I will have a go'. I was shown how to use it, and I managed to put a few stripes in. As I got used to it, my interest grew and I decided to give up coaching."

"I would start to see things happening on the pitch. For example, when the boys would say the pitch needs divoting I would just put a roller over it. Then I would realise the problem with water settling on the pitch was getting worse, and I would wonder why."

This led Wes to want to know more about how he could improve the pitch and the correct methods for maintenance. "I started to get inspired by what other people were doing, and I would go onto the Pitchcare website. I would read about the best practices, look at the diaries, take ideas from various articles and would go on the forum and post my questions on there. This led me to looking for more answers on Google which, in turn, led me to other sites, and I started to use my Twitter account in 2016 to follow other groundsmen. This made me realise how big the sports turf industry is and what was required to maintain a pitch to a good standard."

With Wes's interest growing, he knew he wouldn't be able to get the funds required to purchase some of the machinery he required. So, he took it upon himself to build it himself. "I started to think about how I could improve things. I am a chippy by trade, and I have always been good with my hands. Whilst at Elstow, I assembled a spiker using a bit of pipe with batons on with nails attached. I would use this when overseeding and to relieve some compaction in the first few inches of the pitch. To be honest, it worked pretty well.

While I have been at Cranfield, I have built my own drag brush which I use to take the dew off the pitch and stand up the grass before cutting. A V-brush with a rake and a much-improved spiker, both can be dragged using the triple. It helps that I can utilise materials from my business that are left over from jobs to help build the machines."

Wes, has posted pictures of his pieces of equipment on social media and industry forums to help give other volunteer groundsmen ideas. He has received some great feedback from other groundsmen who have contacted him privately over Twitter for advice on how to put the various pieces of kit together.

Wes moved to Wootton in 2019, which is just three miles up the road from Cranfield United FC, and found himself looking after the pitch after Ivor Kennit, the previous groundsman, fell ill. "I heard he was struggling; I told the club I have not got much to do at Elstow, it is just ticking over. So, I said I will go and give them a hand for a little while. I came up here and thought this is the perfect place for me to really open up and do different things I couldn't do at Elstow. Ivor is now 82 years old and is now unable to lend a hand, so I often ring him to tell him what's going on and send him some pictures over."

With the dedication Wes shows for the pitches, and with the willingness to learn whilst at both clubs, he has been nominated and won Groundsman of the Year for the Bedfordshire County Football League on a few occasions. "I will always remember 2018 when I won the County Groundsman award and then found myself in the regional finals. I was buzzing when two professional groundsmen came to see me to judge the pitch - Andy Gray from Southampton and Bruce Elliot from Crystal Palace. The icing on the cake was when I won the regionals and found myself at St George's Park with the chance to win the FA National Groundsman Award, which I'm proud to say I won." 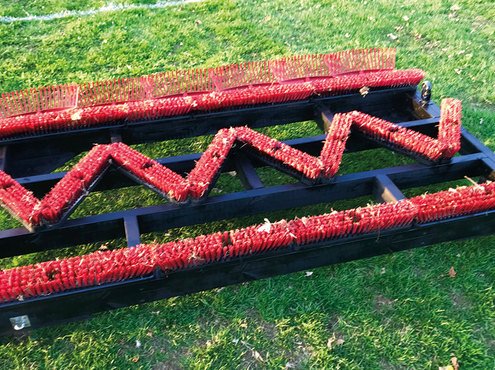 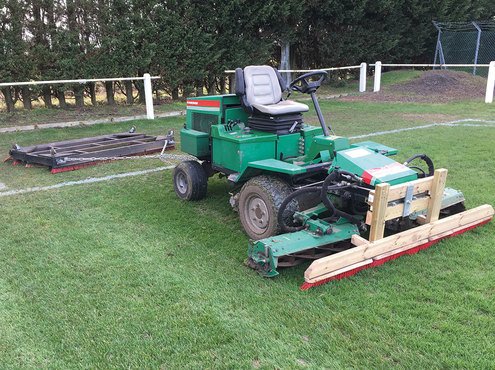 Since turning his attention to Cranfield's pitch, he has already been able to help improve the maintenance regime and renovation works. This was helped by having access to a budget of £2,000 a season. "I'm able to invest some of the money into fertiliser, so I enlisted the help of Martyn Parish from Agrovista Amenity. He takes an annual soil sample and puts a small but affordable programme together for me."

"The pitch is built on heavy clay. We do have some have primary drainage, but it is about thirty years old now, so may need modernising soon. So, we are prone to puddling when we get a heavy downpour. To help alleviate some of the damage that can be caused on match day when this happens, I have been able to get the players to do some of their warm-ups on the outside of the pitch - and none at all in the goalmouths, which has helped us maintain grass cover in the winter."

The ground is surrounded by high conifers which have their advantages and disadvantages throughout the year. "They help protect the players on a matchday from the high winds we can experience and can be a good sound barrier from the local airport. The problems they cause me are that, in summer, they sap the moisture from the side of the pitch whilst, in winter, they to drop a lot of debris when the winds get up, giving me the unenviable task of clearing them up. They also shade half of the pitch from the sun most of the year. I would like to cut them down by half but that is another expense."

Wes talks me through his maintenance regime throughout the season. "I cut the pitch with the Ransomes 2130 triple mower at a height of around 25-35mm. I do this once or twice a week along with pitch divoting. I use my homemade drag brush every other day or when required to help stand up the grass. I carry out surface aeration once a month if conditions allow, using the multi-slitter I have recently purchased and my spiker. I will bring in a contractor to verti-drain the pitch as deep as they can go twice a year."

The renovation was minimal due to the budget available last year, so they levelled off the goalmouths and linesman runs and overseeded. This season, Wes was hoping to carry out a more substantial renovation but, with the current situation with the pandemic, everyone is uncertain when non-league football will be able to resume.

The pandemic will not stop Wes trying out and developing his new project. "I'm building my own seed protector/soaker for goal renovations which I have designed. It will hopefully protect the seeds from the birds, in particular the pigeons which live in the conifers. We only have a single outside tap for irrigation, so we are limited on water pressure, so I have designed it with this in mind. I have used leftover materials I had from work."

"It's all part of the fun of being a volunteer groundsman for me, trying to overcome those little problems where you don't have the money to do anything. You have to diversify or find another way to get the best out of what you have got available to you. Then, when you start to see the fruits of it, you turn back and go, it was hard work, but it works and does the job." 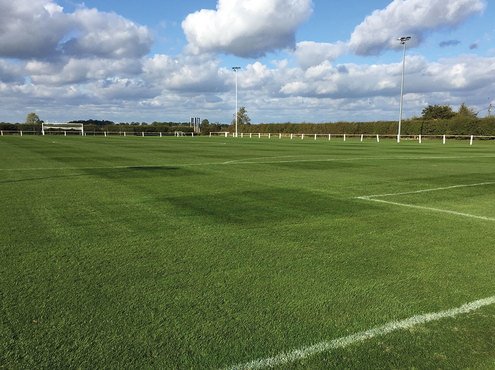 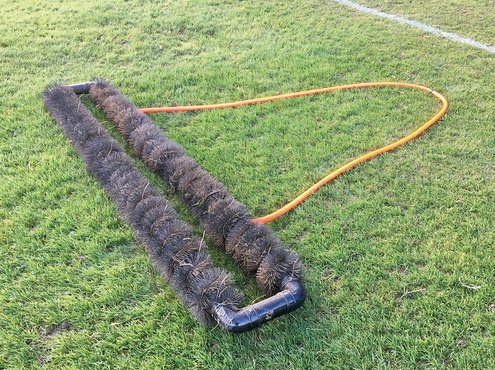 The club was formed in 1903. After the first world war, they played in the Bedford and District League and then moved to the North Bucks & District Football League in 1930. They joined Division 2b of the South Midlands League in 1949 and won it at the first attempt, winning promotion to Division One. They were promoted to the Premier division in the 1952-53 seasons when they finished as runners-up. The club remained in the Premier division until the 1955-56 season when they were relegated to Division One and, three seasons later, were relegated again to the Bedford and District League.

In 2009-10, they played in the FA Cup for the first-ever time, losing to Crawley Green 3-1 in the extra preliminary qualifying round.