0 Caribbean cricket in the UK entering a new era

"We're hoping that Usman will take over as head groundsman one day, when the 'Old Goat' is put out to the long grass"

The heavy roller has completed its pre-season session - ironing out the ground undulations and upheavals of, what was, a mainly mild but uncommonly dry winter.
The signs are that this cricket square will deliver the kind of hard wickets that create the high bounce beloved of West Indians. And it's fitting that it should, because the square in question is at the home of Caribbean cricket in Britain - Leeds.

I'm talking to the man who is striving to move this arm of the game into a new era of sponsorship and prosperity. But, it's a tough challenge that faces Harwood Williams, chairman of Leeds Caribbean Cricket Club (LCCC).

Four years in the post, he has seen sponsorship at national level come and go, to leave Caribbean cricket struggling for the money it needs to enable it to advance, fund facility improvements and promote itself more powerfully.

That said, the network of Caribbean cricket clubs that stretches across Britain is a reflection of the strength and unity of West Indian communities. And Leeds was the first site, established in 1948 in the aftermath of World War II in a land desperate to rebuild the ravaged fabric of a nation.

"West Indians played their part in the conflict," says Harwood, "but, after the War, were left asking 'What do we do now?'. The country wanted support from members of the Commonwealth to 'build Britain', as my mother would have said."

Finding ready work as the country rose from the ashes, those based here began to bring their families over to start life afresh in the Brave New World of the 1950s.
"Caribbean cricket clubs are to be found in most major towns and cities," says Harwood, "from Sheffield and Manchester to Birmingham and Bristol. West Indians from different countries tended to settle in different parts of the country. In Leeds, they were mainly Jamaicans, whilst in Leicester, Antiguans, for example, but those from Barbados, Trinidad and St Kitts and Nevis also set up communities elsewhere.

Cricket was the cohesive force that pulled the strands of Britain's West Indian population together and, until as recently as two years ago, Caribbean clubs had enjoyed national sponsorship by the likes of Victoria Mutual and, before them, Western Union, that could support a league structure.

That's now gone. Although Harwood is determined to attract backing once more, tough times may not bode well for that vision to be realised anytime soon, he admits.
"Currently, clubs play each other in friendlies. One year, Leeds will travel to London, the next year they'll visit us for a game. It's a casual structure, but allows us to keep in touch with each other," he explains.

That's not to say that Caribbean cricket is languishing in the doldrums. Quite the contrary in fact, Harwood tells me. Regularly fielding a first and second senior eleven, Leeds is also attracting a strong junior element. "We began with two junior teams and now run five," he reports, "9s, 11s, 13s, 15s and 17s."

Does he rely on 'through the window' enrolment, or is Leeds CCC proactively seeking young blood? "The club visits local schools to promote the game and we also stage open days, when the local community can play in friendlies. That's working well for us," he says.

LCCC serves a valuable social function by acting as a key focal point for those who come to live in Britain from the West Indies, Harwood explains. "We try to offer a kind of home from home for them - somewhere they can enjoy traditional Caribbean food and speak the local lingo. In time, we can move them to areas we think are most suitable for them. People come from most of the islands and may wish to settle in a community of their own kind."

Membership is open to anyone, Harwood stresses. "English, Chinese, Afghanistani and Asian players populate the senior and junior sides. "For five years now, we've organised an inter-faith day in June or July and run a tournament as a celebration of our multi-cultural community."

Sited in Scott Hall in Chapeltown, one of the less prosperous areas of Leeds, the club cannot charge the level of membership fee that others of the Caribbean cricket network in more affluent regions are able to. Senior playing members pay £25 annually, those aged between 12 and 17, £10, and under 12s, just £5.

Operational budgets may be lowly, but Leeds has enjoyed its share of good fortune in the sixty-four years of its life. From its origins in a "hut", the club approached Leeds council in a bid to move from, what was, an unsuitable site.

"Through a partnership with them, we were able to set up on council land," explains Harwood. "There was nothing there, just a field. The council built the clubhouse and created the cricket square for us."

That was in 1988, and the council continues to help out, mowing the outfield weekly during the season, whilst LCCC's volunteer team of three groundsmen and Harwood focus on the square.

"Funds don't stretch to affording gang mowers," he states, "but we have three walk-behinds, spikers and brushers and the two-tonne heavy roller, purchased five years ago with a £4,500 grant, to keep the square up to scratch."

The clubhouse's bar and dining area is the main revenue stream, and Harwood is conscious of the potential to increase it still further. "A fundraising effort began last year to raise the money for a clubhouse extension that will include more dining and a social area," he says.

Although he lives in Leeds, Harwood, 42, who began his playing career in St Kitts some twenty years ago, travels to Dunnington - between York and Hull - to compete at semi-professional level. "I play mostly 60, 50 and 20-over cricket but, unfortunately, LCCC cannot afford to pay me."

Britain's Caribbean cricket has spawned some notable players. Batsman Stuart Williams and fast bowler Corey Collymore both served the West Indies national side in recent decades. I wondered who might emerge from the 100-strong ranks of the Leeds juniors.

Spectator capacity may be modest, but Leeds increasingly seeks to attract the crowds by staging special events. This July, it hopes to repeat last year's triumphant Twenty20 tournament, when 2,500 fans came to see Birmingham, Huddersfield, Sheffield and Manchester battle it out with the home side in a celebration of the Caribbean game. Top club, Northampton, may be tempted to participate this time too, Harwood hopes.

However, revenue levels are yet to rise to the point where they can pay for new facilities, and Harwood is set on attracting whatever funding he can on his watch. A "2012 committee" is targeting local businesses, whilst the new season has dawned on a fresh acquisition - a £2,000 digital scoreboard, courtesy of housing association North East Homes.

"They have tenants locally, and part of the deal is that they can come here to play cricket. An opening day for the scoreboard is planned and we'll invite them down then for a game," Harwood explains.

An innovative example of how a grassroots sports club can serve an important community function, and be rewarded for it in a way that helps raise the profile of cricket, build loyalty, boost participation and create extra clubhouse revenue.

Back to that heavy roller. "West Indians grow up on hard wickets that create bounce, so we like to create similar pitches here," says Harwood. "We prefer a harder deck, and play cross-bat rather than straight bat cricket." Thirty to forty hours of the two-tonner on the ten wickets at Leeds helped deliver that kind of surface, ready for the first game on 21 April.

But the quantity of cricket played at the ground requires a programme of rotation, he adds. "The square is used almost every day - Saturdays and Sundays by the seniors, and during the week by juniors. The grounds team are kept fully occupied."

As you might expect, it's almost as multi-cultural as the 100 plus membership. Head groundsman, Alth Weeks, has worked on the ground for fifteen years and is now in his sixties. "The old goat is still going strong," chuckles Harwood.

I'd requested an interview with Alth, but he had politely declined my invitation, perhaps being a tad too bashful to tell readers about the sterling work he and his assistants undertake for the love of their sport. But, "old goat"? How would that wash? "It's a Caribbean term," Harwood reassures me. Well, he had said that they speak "the lingo" at LCCC.

If the assistants had been given pet names, I was spared them. Fellow West Indian, Lenny Randall, who'd trained on the job there, and young Pakistani prospect Usman Mahmood, the 26-year old apprentice, offered committed support to Alth, I was informed. 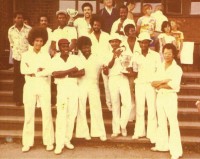 "We're hoping that Usman will take over as head groundsman one day," Harwood says. Presumably when the "Old Goat" is put out to the long grass.

With its first and second senior teams in division two and three respectively of the Central Yorkshire League, Leeds hosts plenty of competitive play. That, and the battery of junior fixtures adds up to a fair degree of wear and tear on the strips, which is why the rotation is so important. "If we plan it right, we can bring the strips that are used at the start of season back into play for the final few weeks."

This season is a critical one for Leeds. "The pressure is really on our first team to gain promotion to division one," says Harwood, "because we couldn't have two teams in the same division if our second eleven moved up - they were runners-up last season." More work for the grounds team, I suspect.

I asked about the run-up to the season and the dry spell. "There's been plenty of mild weather and grass growth despite the lack of rain. We started cutting in February and no cracks have developed, so the wickets are in the kind of condition we like. With the kind of resources we have here, I think the team does a great job. The square is inspected three times a season, and we have to reach standards consistent with us being in the Central Yorkshire League."

Once the last game is played at the end of September, Leeds bring in local sportsground contractor, Fergusons, to "put the square to bed for the winter", which costs them between £1,400 and £1,500, Harwood says.

However, they'll have to rely on the volunteer workforce to ameliorate the outfield which, according to Harwood, is not particularly flat. "Topsoil needs to be applied to level it out. The council played a straight bat when we approached them to fund the improvements, saying they had no money and had been forced to lay off staff to cut costs." A familiar refrain across Britain, I suspect.

But, amid national austerity, there's much for LCCC to celebrate - a new generation of players, steadily improving provision, opportunities to swell spectator numbers, proactive moves to link with schools and the local community and measured success with sourcing funding. A mini model of success, surely.