November sees the beginning of leaf fall from trees. This leaf debris can be problematic, especially when the they are left to accumulate on the playing surface for a period of time. Lack of air and light to the grass plant will invariably cause the grass to discolour (turn yellow) and even decay. This leaf matter could also initiate diseases onto the green. Regular, ideally daily brushing with a cane or brush will keep the surface clean and tidy and free from debris.

Greens should also be brushed daily to disperse early morning dews, thus keeping the surface dry which in turn helps prevent the onset of disease. Diseases, particularly fusarium can still be prevalent during November. Good cultural practices will help reduce the incidence of disease attack. Improving surface water drainage by regular inputs of spiking/ aerating should now be implemented on a fortnight/monthly basis. Ideally you should vary the depth of aeration to prevent a pan forming, using different types of aerating equipment(sarrel rollers, knife, solid or hollow tined spikers). 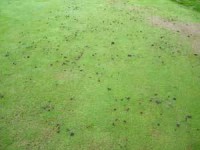 With the season finished and the green closed down for the winter, mowing will only be required to maintain a winter height of cut at 10-12mm.

Most bowling green facilities are enclosed by fences or hedges. November is a good time to complete any tidying up of these features. Hedges can be pruned and cut to maintain their shape and form.

Other jobs for consideration are the inspection and maintenance of machinery and irrigation equipment. Now is a good time to arrange servicing of the equipment and replace any worn or damaged parts.