0 Diversity is the only way at Hart Common Golf Club

It's been over eight years since Pitchcare first visited Hart Common Golf Club and much has happened in the interim period. Lee Williams visits one of his old haunts to discover more. Hart Common Golf Course is situated in Westhoughton, Bolton and is privately-owned by Peter Roberts. Since it was first opened in 1995 as an 18-hole venue, it has been developed into a 27-hole complex with an 18-hole, par 72 6307 yards parkland course, a nine-hole 694 yards Academy course, three full-sized practice holes and a fully covered twenty-six bay floodlit driving range.

Hart Common is the first club I joined as a fifteen-year-old, along with my dad and my uncle, as it was a short drive from where I lived with my parents. I have watched this course develop over the years and have always been impressed with the amount of thought and work that Peter and his family have put into improving it year on year. This shows, as they are now in the top ten best courses to play under £20 on the Golfshake.com website.

On a cold and very foggy day, I met up with Course Manager Richard Roberts, who is also Peter's son. I have known Richard for several years now. We first met when I worked in sales and, over time, we have grown to become good friends through a shared love of the industry.

Richard and Peter are always looking at new ways to improve the course, whether that be investment in machinery or testing new products on the market. To help sustain this investment, they have always looked at other ways of bringing money into the club so that they don't depend solely on green fees. 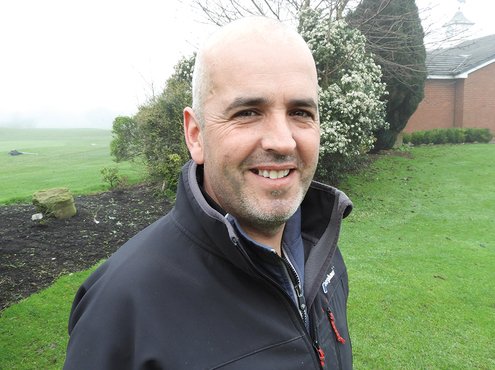 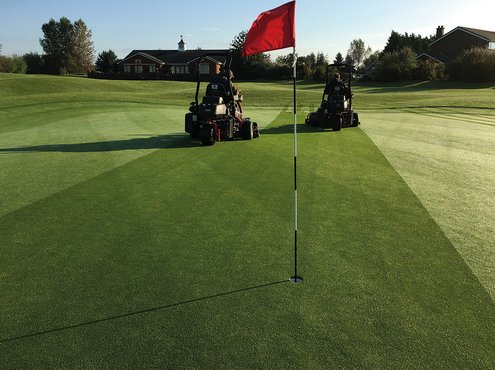 One such method is outside contracting work around the Greater Manchester area, which Richard is responsible for. He does most of the work himself around the daily management of the golf course. "Over time, we have just diversified into other things. Instead of hiring machinery, we have always bought it. We like to carry out our own verti-draining which some people get a contractor in to do a few times a year on their greens, tees and fairways. We now have the equipment to do this ourselves and, at the same time, we are doing other people's. This helps pay for the machinery but, additionally, gives us the flexibility to not have to depend on contractors being available."

In the early days, Richard started out by offering to help with the playing surfaces at local sports clubs who he'd played for in the past, or where friends were involved with them, and it has grown from there. "Once clubs know there's someone who understands their needs and budgets and can tailor work to give them the best value for their money, they soon come to trust and rely on what we offer them."

Over time, the demand for Richard's services has grown and, subsequently, they have acquired quite a bit of specialist kit. This enables them to cover virtually all sports surfaces, both natural and artificial, from local bowling greens up to stadium pitches. "We do a lot of seed drills on greens with the Vredo, whilst the Air2G2 is out a lot on hire. We have carried out drainage jobs at a few other local golf courses. We do a lot of football pitch maintenance and end of season renovations for various clubs around the area."

Whilst Richard is away, his twin sisters Catherine and Claire (33) are at the helm. They have been working full time at the club since they left full time education but, even before they finished school, they would pick up balls at the driving range and rake bunkers at the weekends and in school holidays. Alan Lee, whose dad helped build the golf course, has been at the club for twenty years. Terry Battersby joined twelve months ago. Johnny Bowker is the in-house mechanic. He is self-employed and uses the club's grinders and facilities to run his own business whilst repairing and servicing the club's machines. Johnny features in Pitchcare's 'how to' series of videos. 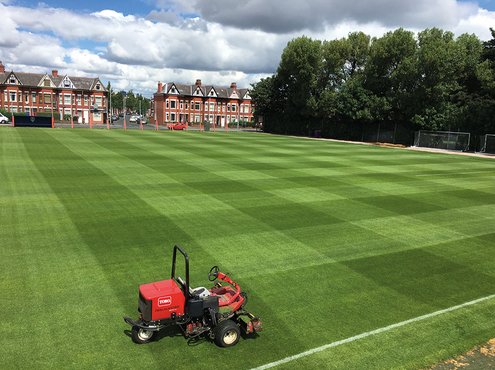 Richard has PA1, PA2 and PA6 spraying certificates but, other than this, does not have any industry-recognised qualifications. "I've learned everything on the job over the last twenty odd years, plus sharing ideas with other industry professionals. With my family coming from a farming background, we all knew a bit about growing grass and what was involved in it. So, with quite a bit of tweaking here and there, I have got to where I am today. I have never really had the time to go to college as I have been helping my dad build and improve the course since the beginning. This said, I do feel that having a career in this industry, without going through the usual training and educational paths, has helped round my knowledge. We've tried and tested lots of new products, equipment and ideas over the years and tweaked quite a few of them to include them in both our course maintenance and our contracting business."

Moving back to the course itself, I ask Richard what maintenance they undertake on the greens. "We have been overseeding the greens once every six weeks since last March with 20kg of creeping bent grass seed and we have been getting some great results. For years, a lot of experts have said you only see bent grasses take in August/September when the soil temperatures are up but, as I said, we did them in early spring last year and it came through brilliantly. We are set to do some tests with a seed manufacturer at the end of January, so it will be interesting to see the results."

With the introduction of a higher percentage of bent grass now visible in the greens, Richard is using a lot less fertiliser. He believes this has led to a reduction in Poa annua, either by being starved out or strangled out by the creeping bents.

Alongside the overseeding programme, Richard likes to scarify the greens as often as he can get away with. "We have a couple of scarifiers we use on the greens, plus a small, tractor mounted Koro with a box, which is a little bit severe to use too often, so we use that twice a year at a depth of 15mm. Then we have the Greentech scarifying units on the Toro Greensmaster. The blades are a lot narrower and further apart, so this enables us to go a lot deeper; around 25 to 30mm if needed. This will be done once a month throughout the season, if the grass is growing hard and dense enough. We can then scarify them on a Monday and, by the end of the week, it doesn't look like we have been on them. It's about removing the thatch that is there; a lot of people say that creeping bents produce a lot more thatch than other varieties. If anything, I would like to think that we are now on top of our thatch levels."

Richard is trying to reduce the number of chemicals he applies to the greens, which is a process he has been working on for the last two years as more and more chemicals have been taken off the market in recent years. "It was hard work at the start, but we do a lot more coring now, using the micro core cassettes for the Greensmaster. We break the cores up on the green, so they are getting topdressed with the rootzone that has got all the nutrients, humus and everything else. In the last twelve months, we have applied just two granular fertilisers; the rest have been liquid feeds, with the addition of biomass sugars, liquid gypsum and precision microbes."

"The wetting agents made a big difference last summer. Generally, when there is a hot spell, the greens will burn off over a weekend, but it was at least eight weeks into last summer's dry spell before it was panic stations; we were watering, but not going out hand watering trying to put wetting agent tablets on. For us, that was unheard off."

I asked Richard what he put this down to. "It's a bit of everything really; obviously, we are breaking the thatch down and, if everything is right underneath, the grass will look after itself. It's only when grass is under stress, and things are not right, does disease and dry patch creep in."

Over the last eight years, Peter, with the backing of Richard, has invested heavily in a variety of aeration equipment from Campey Turf Care and Cheshire Turf Machinery which has played a big part in the maintenance of the course.

I asked Richard what his aeration programme is and how often it is carried out. "We don't have a set maintenance programme, it's just if and when depending on fixtures. We have a Charterhouse high-speed Verti-Drain, Toro ProCore, Air2G2, Imants Rotoknife, Greentech hollow tining units on one of the triples and sorrel rollers, so we try to keep the greens open. We'll aerate on a Monday/Tuesday most weeks, varying the machines we use and the depths we go to." 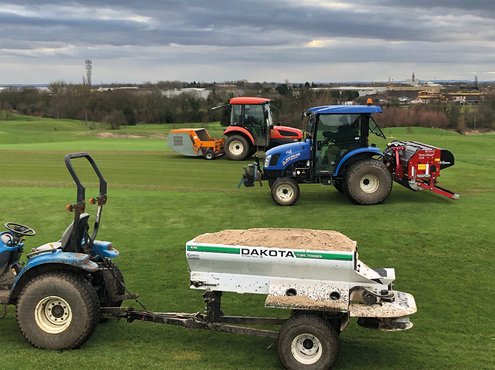 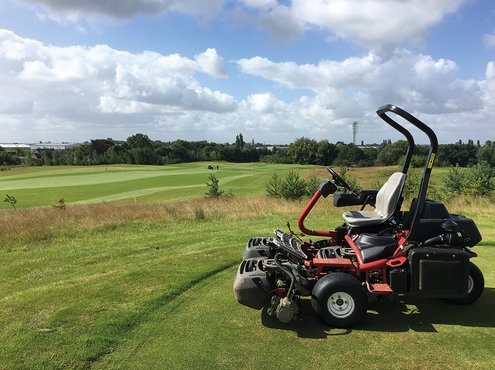 "The greens are not quite USGA specification, but we have twelve inches of rootzone over a gravel carpet, so we like to get down as deep as we can. The tees and fairways are verti-drained and shockwaved at least once a year, the walkways and high traffic areas are done two or three times a year."

Richard would like to invest in a bigger Koro with an elevator and a Koro Recycler in the future, but says that he would have to find enough work for the them outside of the golf course to make the purchases cost-effective. "This would mean getting bigger on the contracting side, adding to my already busy workload. I think the Koro Recycler is something we will look at.

With sand getting more expensive, it would help cut the cost of topdressing when renovating football pitches. We have looked at it before for the tees instead of going out divoting every week - let the tee get ripped up, put the soil recycler over it, bring the soil back to the top, reseed it, level it out and you have a completely new tee again."

Richard and his dad are proud of the work they have carried out in recent years to help improve the ecology at the golf club. "We have planted thousands of trees creating quite a few woodland areas which, along with the long rough, we allow to grow in through the middle of the course. This has helped create a desirable habitat for many species of wildlife. We have also got quite a few wild orchids growing around a number of the ponds on the golf course."

Richard believes the industry is facing many problems at the moment, mainly due to the pressure placed on greenkeepers to continue to produce quality surfaces and keep improving courses whilst facing budget and staff cuts. This situation, he says, cannot be maintained. 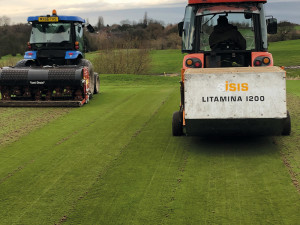