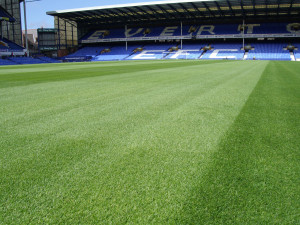 Everton are set to install a brand new, state-of-the-art playing surface, which has been described as the 'Rolls-Royce of pitches'.

Having appointed Roberto Martinez as manager last week, the Toffees are now improving the quality of the Goodison Park turf and hope it will aid the Spanish boss' attacking, passing style of play for which he is known. The system will be the same type used in recent World Cup and Champions League finals and will be one of the best in the country.

Head Goodison groundsman Bob Lennon told the 'Evertonian' magazine: 'What we are doing this year is a full renovation of the pitch, which includes a new system called Desso Grassmaster. It's the same as Arsenal, Aston Villa and Wembley use.'