0 Gatton Manor Hotel and Golf Club - Moving with the times? 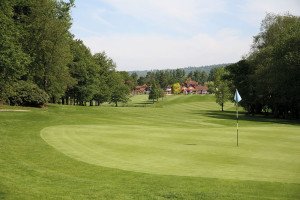 Rob's career path is an interesting journey and it started during February 1989 when his brother-in-law inspired him to apply for work experience at East Brighton Golf Club, where he was Head Greenkeeper at the time. Rob got the position (maybe down to a little of 'it's not what you know but who you know') but, after a week on the course, he knew this was the profession for him and stayed there for the following four years.

From there, Rob moved further afield to Singing Hills Golf Club, and started his NVQ2 at Plumpton College. The challenge here
was a great one; going from a chalk base to a heavy clay base profile, which was obviously like chalk and cheese, and gave him a vast knowledge and understanding of the two profiles. 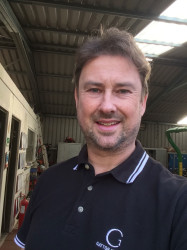 Another four years passed and Rob was approached by Mr Chris Collins (the man who built Singing Hills and many more). Rob said: "He wanted to know if I would be interested in being Head Greenkeeper of a brand new course he had just finished, which was Burgess Hill Golf Course. It was obviously a bit daunting, but if was my first step to being a Head Greenkeeper and a fantastic experience; gaining knowledge of brand new fescue USGA specification greens."

"I remained there for a wonderful two years before I flew the nest to go to Australia to travel and work on a championship golf course. My first stop was Royal Sydney Golf Club, where I only worked for three months due to my working visa but this was a spectacular experience, gaining knowledge on warm season grasses and extensive tournament set up processes."

"The Superintendent from Royal Sydney was impressed with my work ethic and knowledge, and set up a position at Yarra Yarra Golf Club in Melbourne. At the time I joined, they were holding the Women's Open 2001, which added greatly to my tournament experience. After only a month, I was responsible for the bunker maintenance team, which was an incredible challenge given there was over 100 bunkers, and they weren't small! This involved monitoring sand depths, topping, edging and watering. The tournament was a success and I brought back the knowledge I gained to the UK."

"It was good to be back on home soil, and my next challenge was being appointed Head Greenkeeper at Horsham Golf & Fitness in West Sussex. The course was heavy clay and the greens were half and half; some clay push ups and some sand base construction and I had to learn very quickly what feeding programme to apply to the greens to make them perform consistently. After a few
years there, I started as Head Greenkeeper at Rusper Golf Club which was also a heavy clay site that was carved through really beautiful woodland."

The next step leads me to where I am today as Course Manager of one of my favourite courses, Gatton Manor. It really
is an honour to be here and, with over twenty-seven years in the industry (thirteen of those at management level), I feel well placed to maintain the course in a manner it deserves."

This mature 18 hole woodland course was established in the late 1960s. At 6,600 yards off the blue tees the challenging course is championship length and is the work of English golf architect, Commander John D Harris. The Commander has made imaginative use of streams, lakes, and tree-lined fairways with water coming into play on ten of the holes. 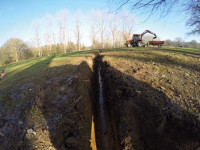 Winter projects are carried out in-house and have been well under way over the last few months. Rob continued: "This winter, we have extended pathways along with adding drainage to fairways and carried out tree work around the greens and tees. Most greens are surrounded by trees and we suffer from shade and poor air movement so, every winter, we try to attack this."

"This year's project was to take down every other tree around the 7th green. It was surrounded by fourteen established Ash trees that blocked light and airflow. By doing this, it has really improved the mid-morning light; even this time of year, when usually it's in full shade. This will also improve the grass sward that can be a little thin during the winter months."

"Another big project was to improve the pathways due to them becoming very wet and slippery after heavy rainfall. The 1st pathway was extended by 30 metres and the 9th by 80 metres. We used Type 1 material as a base, to a depth of 4 inches, then a Redpave material at a depth of 2 inches and finished with a compactor plate, which gave the smooth finish." 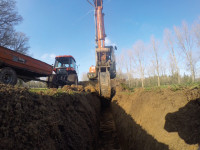 The greens are clay push up type which were designed to hold the water but can cause a few problems in the winter. Rob said: "We got the green light to drain a couple of the wettest areas on the 9th and 17th fairways, and we installed 200m in total of 100mm perforated pipe across the fairways and into the existing ditch. Following this, we topped up with 10mm gravel and sharp sand with a 2 inch layer of rootzone mix."

"Every four years, we hire in the Terrain Aeration Terralift® with an operator. This machine has a probe that penetrates at a depth of 1m which then forces compressed air to the profile below. After the air is released, the fractures that the probe has made are then filled with dried seaweed. This method has been successful for us and each winter the greens are improved with less waterlogging."

Rob continued: "The greens are solid tined with a 10mm tine and lightly topdressed monthly using a RedHill 28 grade sand. This helps in keeping the surface breathing and the water moving through the profile. For the last two years in August, we have been using the Graden sand injection which has really helped firm up the surface and decrease the thatch level in the top 20mm. Soil samples taken once a year, demonstrate this." 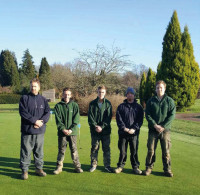 Working with Rob to achieve such excellence on the course are: Head Greenkeeper, Rich Worsfold; Assistant Greenkeepers, Anthony Baldwin, Mike Fisher and Rich Allingham. A seasonal greenkeeper is also employed in the summer. Team members are trained on all machinery to enable them to have a wide range of skills and knowledge, which helps keep things ticking over when staff are sick or on holiday. Rob said: "Presentation is very important here and the team take it very seriously. The guys are very competitive when it comes to definition. The weather plays a major part, as it does anywhere, and recently we've seen winter extend to April whilst the summer continues to October which means the team are cutting surfaces all the way up to Christmas."

One of the diseases the team struggle with is Fusaruim and the occasional Anthracnose in summer. They overcome this by spraying a preventative fungicide through the growing season and an application of Banner Maxx a week before hollow tining in the spring. This helps the greens through the stressful period of being covered in sand and through the aggressive brushing.

"In the summer, we use an application of Heritage Maxx Turf Disease Control as a preventative, in the same week as our summer 13-3-13 granular fertiliser" commented Rob. "We always see some outbreaks after the first initial boost from the feed, especially when the conditions are wet. But, we expect this to see us through until the August greens maintenance programme where again, a week before, we will give them another application of Banner Maxx. The greens this year are virtually 100% free of scarring which I'm very proud of because September saw some really humid days and nights."

"We manage the weed control in-house and suffer particularly from clover and plaintain which are most common. Last year, we applied Redeem for the first time to tees, approaches, surrounds and fairways which gave us fantastic results."

"There is a stream which runs through five holes on the course along with a lake around the club house, so these need to be looked after carefully. We work closely with the local environmental agency to ensure there are no problems and water tests are carried out annually, concluded Rob."

Communication plays a big part of the Club ethos; members can view the course status every morning via the website and they are updated with a monthly work programme on the notice board. Given the extensive work Rob and his team have completed this winter, and the condition of the course, I'm sure many members were disappointed to hear that the course is scheduled to close this October, ahead of a major two-year renovation programme. This will see all the greens replaced with free-draining USGA-specification putting surfaces, and new fairway irrigation.

The current owners will transform the club into a state-of-the-art medical spa and wellness resort, and golf will be offered on a premium pay-and-play basis. However for the remainder of the year, Rob and his team are committed to presenting this much loved course it's best possible condition - on past performance, I have no doubts they will achieve this.