Racing's elite has become more demanding of turf standards in recent years, so how do you ensure the best possible going in the cold, wet north of England? Jane Carley meets Head Groundsman Adrian Kay at York to ﬁnd out. Producing consistent footing for some of the ﬂat season's most prestigious ﬁxtures - including the group 1 Darley Yorkshire Oaks, Juddmonte International and Coolmore Nunthorpe races - on variable soils is the challenge for York Racecourse, and it is one which has been tackled with signiﬁcant investment in drainage and irrigation over the years. But as head groundsman Adrian Kay points out, it is not a matter of 'ﬁt and forget'.

The 10ha racecourse is situated on an old river bed, an expanse of ground known as the Knavesmire - as the name implies, 'man's bog' - and adjacent to the River Ouse. Soils vary from silts, very ﬁne sands and clay within a short distance, so an intensive programme of renovations is required to maintain consistency of the racing surface.

"We fraise mow and deep scarify part of the course each year, getting a clean surface to manage thatch. We then sand slit to connect to the primary drainage lateral drains, using contractors Chappelows with their Koro and Top Drain," says Adrian. "It's carried out in October or November to get ready for the season starting in May - we're fortunate that we're not racing in April as it gives time for the grass to get growing after a cold spring, although we do push it as much as we can, and use varieties chosen for their speed of germination and recovery." In addition to the annual renovation, December 2021 saw 'emergency work' as the gravel layer above the lateral drains had capped with silt, leaving water sitting on top.

"It's still a learning process," he comments, "and it's been a great experience to follow the improvements through from their design."

"But we still can't guarantee that we will never have to abandon as climatic changes have an impact - we can get 35-40mm of rain in three or four hours, and in February there was one metre of ﬂood water on the course after rain upstream. All we can do is ensure that we can get rid of rainwater as quickly as possible, and constantly monitor river levels."

At the other extreme, managing irrigation is carried out to minimise water use, whilst aiming for that all-important 'good to ﬁrm' ground.

"We irrigate between three and ﬁve in the morning, when the winds are lightest and the water is not getting burnt off by the sun, and make use of wetting agents," Adrian explains.

An Imants Shockwave is used for decompaction in dry conditions, and was even deployed in January 2022

The irrigation upgrade included adding a second borehole, modernising the pump system and ﬁtting pop ups to move away from the evapotranspiration that can occur with booms.

"We've had our irrigation water analysed, and we use the water additive Quadrop which slightly acidiﬁes it to be more like rainwater. The added capacity means we can put 5-6mm per night on if necessary, although 3mm is more usual."

The pop-ups have been upgraded over the past two years, with Hunter GT885 sprinklers installed to give improved consistency and throw, 90 on the bend in 2021 and 110 on the home straight this spring.

"Deep tining to make the most of the irrigation water and encourage root growth is such an important task, so we'll run both together to get more output. We also have a Rotoknife which we can use in dry conditions - it was actually out in January, so it's good to have the two different systems to use according to the weather conditions. The pandemic made us, like many others, look at new ways of working and some of the changes have been so positive we've stuck with them." 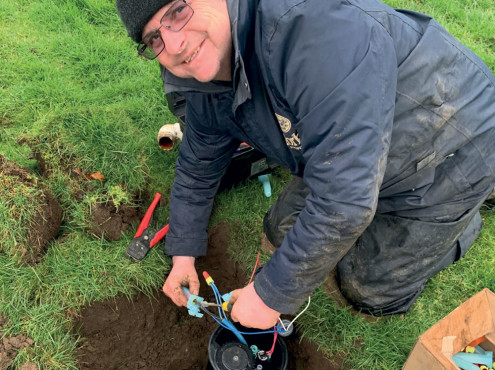 Groundsman Kev Upton ﬁts new sprinkler heads for the pop up irrigation system Right: The home straight showing where sandslits have been placed on part of the track using contractor Chappelows' Top Drain

Adrian comments that having the resources to invest in machinery helps to uphold the high standards required. Mowing is down to a pair of Toro ride-ons, a 5900 and new 4900 Groundsmaster rotaries.

"We can be mowing up to four times a week, but with the two mowers we'll go out after lunch and the whole track can be done in three hours. Quality is vital, so having the deck out front is a beneﬁt, plus they are very manoeuvrable. We're cutting down to 50mm and aim to bring it back up to 75-100mm for the season, and we're now mowing as late as December, which can make timing a bit tight for annual maintenance."

York Racecourse has a long relationship with Kubota, with 88-90hp M8540 and M8560 and three compacts in the ﬂeet, alongside an F-series outfront mower and RTV utility vehicle.

New to the racecourse is the 62hp L2-622, light enough to use on lawns with a topdresser or ProCore, but still capable on the track.

"We've found them to be really good tractors - light in weight but with plenty of power for the range of implements we need to use, from the Terra Spike to sprayers. They are also very straightforward to use."

A second Wiedenmann Terra Spike has been added to the armoury, giving extra capacity for deep tining

Reliability is another must, he points out. "We can be Terraspiking eleven or twelve times a year, and it's also handy to be able to easily swap between similar tractors according to what's available."

The nutrient regime has seen a move over to slow release products over the past decade, he explains.

"Indigrow's 25:5:8 works well on the sandier soil and the hungrier grasses like ryes beneﬁt from it. We make an application in the spring and then again before the Ebor meeting in August with a 15:0:9 liquid feed in between, in a tank mix with a wetting agent. There's no set timing for the liquids as it depends on the weather, but the slow release product gives a good base. We also use biostimulants to help the sward make the most of nutrients. It's a costly exercise on 10ha, especially this year, so experience is key to get it right."

Acelepryn has proved beneﬁcial to keep on top of chafer grubs when evidence was seen of their presence in 2021; prioritising maintenance of the racing surface whilst staff were furloughed meant that the adult beetles were able to evade control on other areas of the course. 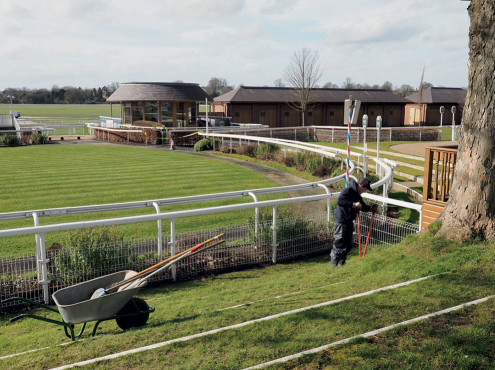 Scariﬁcation taking place at the end of the season Right: Preparing formal areas around the parade ring for the new season; grounds and garden teams have merged for maximum multitasking

The team currently numbers seven, who multitask across gardens and grounds. "We have our own greenhouses and grow on all our own plants from seedlings. We were previously two teams but have now joined together which seems to be working well. What we would like is some new blood and are looking out for two apprentices to work on both the course and the horticultural departments as we are an ageing and long-standing team."

"It's constantly busy and demanding, but I feel privileged that we have the resources needed to produce the racing surfaces demanded by for the highest level of the sport."