Groundsmen from independent schools across the south and the midlands went to Harrow School in July to attend the second annual turf care seminar staged specifically for the sector by Everris.

It followed the success of last year's event at Radley School and more than eighty were welcomed to Harrow by head groundsman Lee Marshallsay who leads a team of 14 groundstaff maintaining the extensive outdoor sporting facilities. 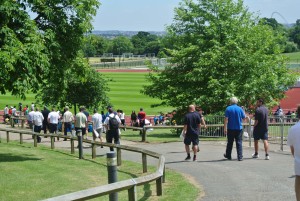 Michael Fance of Everris began the seminar with 'Go in green, come out clean', a presentation on the benefits of integrated turf management and in particular, combatting winter fungal disease. He spoke about the company's commissioning of disease trials and how it became evident that grass had stronger resistance if it builds up reserves during peak growing periods. Light levels, air movement, quality of cut, organic matter, a nutritional programme, sward composition, aeration, and preventative fungicide applications are all key for healthy turf and playable surfaces.

Avoiding 'peaks and troughs' in the cycle of grass plant growth were essential, he said, and the Everris Greenmaster range of liquid fertilisers with its TMax nutrient uptake activator is one of the most effective means of ensuring the grass plant receives the right level of nutrients at the right time. Most delegates indicated via hand-held interactive devices that they tended to opt for using a fungicide before there were any actual signs of disease. Michael described the meticulous trial work carried out into Medallion fungicide at various research stations and revealed that the results conclusively showed that preventative usage is far more effective than curative.

He concluded by emphasizing that the correct method of applying products is always crucial to a groundsman's success and recommended the use of Syngenta's specially developed XC nozzles to ensure accurate, effective application.

Everris's Ian Lacy took the podium next to give an insight into Polyhalite, a key new fertiliser component sourced from the company's Boulby Mine in Cleveland. Polyhalite is a natural occurring multi-nutrient mineral containing magnesium, calcium, potassium and sulphur which gives the grass plant nutrient input that is 'gradual, not boom and bust' in Ian's words. It is a constituent part of the Everris ProTurf range of granular fertilisers first introduced 18 months ago. He showed some impressive before and after application photos taken recently of multi-sports surfaces at the Merchant Taylors' School, and the playing surface at Reading Football Club's Madejski Stadium, which hosts both professional football and rugby union. 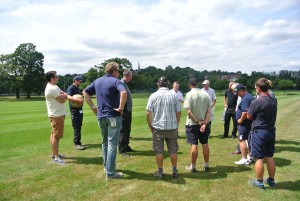 Concluding the morning session in the prestigious school's Ryan Theatre, Paul Mytton, head groundsman at Aston Villa's Villa Park, gave an illustrated talk on how the Premiership club maintains and renovates its Desso pitch and how it protects the playing surface when concerts are staged at the stadium.

After lunch in a dining room with a vista that takes in Wembley Stadium and the City of London beyond, the visiting groundsmen from more than 20 schools including Taunton, Oakham, St Albans, Shrewsbury, and last year's hosts Radley, were given tours of the school grounds by Lee Marshallsay and members of his team. As well as getting a close look at impressive winter and summer pitch facilities, they were introduced to a game not on any of their agendas, that of Harrow football, unique to the 450 year old school and the forerunner to Association Football.

Summing up the general enthusiasm of the delegates, Taunton School's head groundsman Mark Jolliffe said afterwards: "The end of the school year is the perfect time for those of us responsible for independent school grounds to get together. Interesting topics and a chance to chat and swap experiences as a group of like-minded professionals, what could be better?"