0 Lording it over Ilkley Lawn Tennis and Squash Club

Head Groundsman, Richard Lord has served Ilkley Lawn Tennis and Squash Club for many years. He is not only responsible for making sure the various playing surfaces are in tip-top condition throughout the year, but he also doubles up as the maintenance man. Lee Williams met up with him to have a socially distanced chat about the challenges he faces. 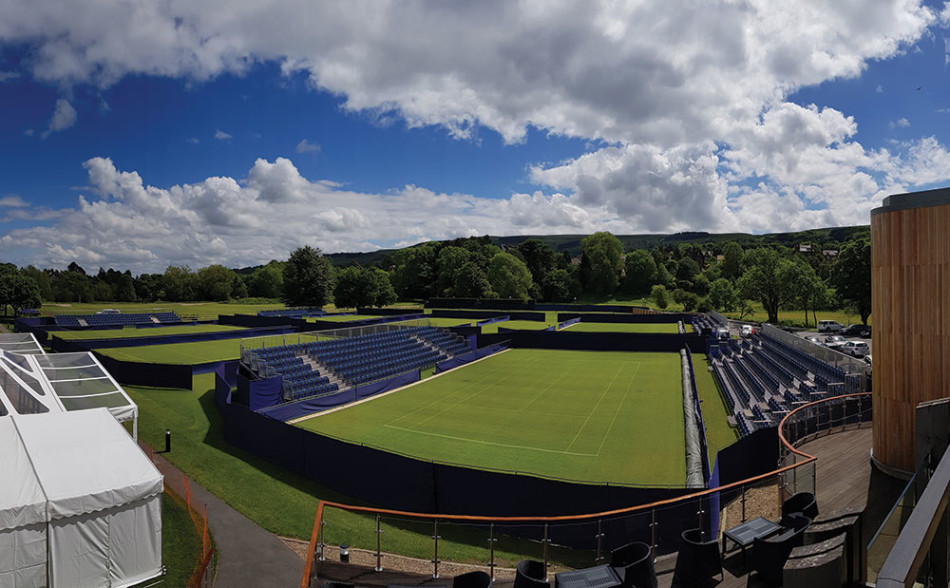 Ilkley Lawn Tennis & Squash Club is a member-run club based in Ilkley, West Yorkshire. With a long history stretching back to 1880, the club enjoys a fantastic position next to the River Wharfe with panoramic views across Ilkley's famous moor. Over the years, the club has grown into a dynamic multi-sports community, focused on their primary sports of tennis, squash and racket ball.

Being next to the River Wharfe, and with the amount of rain the area has experienced in recent years, the club is now, unfortunately, more prone to flooding than in previous years. Richard tells me how they have had to adapt and what they do once the water has subsided. "When we know it is going to flood, we have to evacuate the site as the water can get up to four feet high on the grass courts. The water cannot get into the main clubhouse as this has been built on stilts, but it will get onto the indoor courts - the most we have had so far this winter is seven inches! It has also started to reach our Astroturf courts and, although they are built on a raised platform, the water level still reached two to three inches. This has caused some rippling on parts of the Astroturf carpet which we will have to assess once it dries out."

"Once the water has subsided, we ask members to come down and volunteer to help us with the clean-up. We normally get an excellent response. It is often the same people each time, so we get them to concentrate on clearing the hard courts and paths. The debris and sludge are put into piles, and we then collect it with the tractor and trailer and give it back to the river! For the indoor courts, the tennis coaches come down and, between us, we push the water out of the building with the Dewmaster brushes, power wash the surface and get them back into play, which can be done in a day if we work hard. On the grass courts, we let the water dissipate naturally, remove the debris left behind and, when possible, give them a brush and a cut." 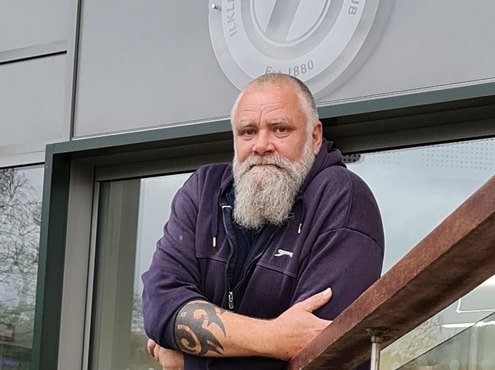 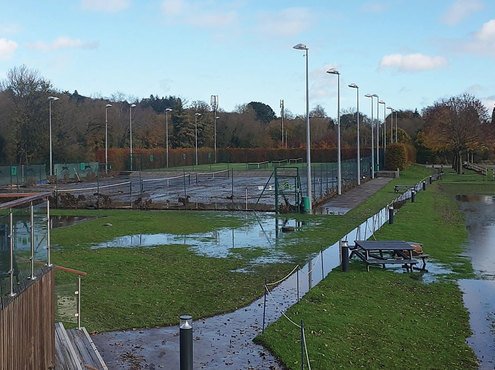 I asked Richard how often flooding has occurred in recent years? "It definitely seems to be a more regular occurrence. In the past, they used to say it was a 'one in every fifty years flood'. But this latest one (November) is the third this past year that has got onto the indoor courts. It has been one of the worst we have had so far. The seasons seem to be changing. We had great weather in early February, and it was blistering sunshine for much of the year, so we found ourselves watering early. The seasons are not defined like they used to be. We don't tend to have April showers anymore, and I have not witnessed as much snow, if any, in the winters. The seasons are all mixed up!"

The tennis club holds a tournament every year which sees the winners of the men's and ladies' singles trophies get a wildcard into Wimbledon. Unfortunately, due to the pandemic, the event was cancelled last summer. Richard talks me through what is involved in getting ready for the tournament. "It is now named the Ilkley Trophy and is a pre-Wimbledon tournament. Work starts about now really to get the grass prepared for next spring. Then, two weeks before, we begin to put up canvases and the stands are erected a week before the tournament. We get help from the local rugby club (who want some paid work) to help the groundstaff during the event. As we need at least six people to pull the covers on and off, we will cut every day and white line some courts the previous evening to save us time in the morning. We used to start work at 5.00am but, since investing in better machinery and cutting and prepping some courts the evening before, we are able to start an hour later. We can be here till at least ten at night prepping for the next day's play."

"The tournament lasts nine days, running from a Saturday to a Sunday. We do not get the top players attending the event as we are on at the same time as the Queen's Club and Halle Open in Germany. We normally get players ranked between sixty and one hundred and fifty. A few years ago, our ladies winner Magdaleyna Rybarikova, got to the semi-finals of Wimbledon and, at the last tournament, we had Leander Paes come and play in the doubles; he has won eighteen Grand Slam titles (mainly doubles) in his career. In recent years, we have also had Daniil Medvedev, who won the 2020 ATP Finals, and Ivan Dodig, to name a few."

Richard tells me the soil profile of the courts is a combination of clay and sand, and that they are very well-draining, considering there are no drains. In the past, the courts have been koroed off, removing the top surface and replacing this with 20-30mm of Surrey Loam to level of the playing surface. This is the same loam they use at Wimbledon.

The club draws water from the River Wharfe to irrigate the courts in the summer months. "We can take up to 20,000 cubic litres a day from the river without needing a licence. When we had the courts koroed off the last time, we had some irrigation pipes laid underground, along with some connection points, so we can irrigate from there rather than using the old aluminium piping. We do not have pop-ups, just a travelling sprinkler and some statics that we will just keep moving around. We can run four static sprinklers at a reasonable rate enabling us to water two courts an hour." 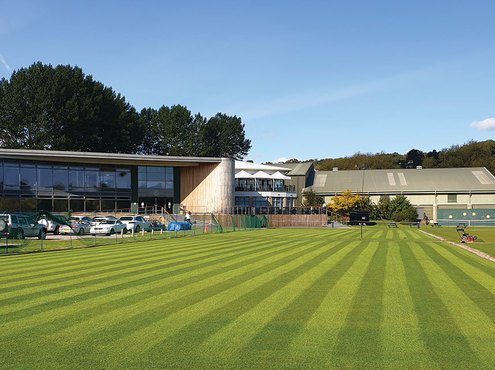 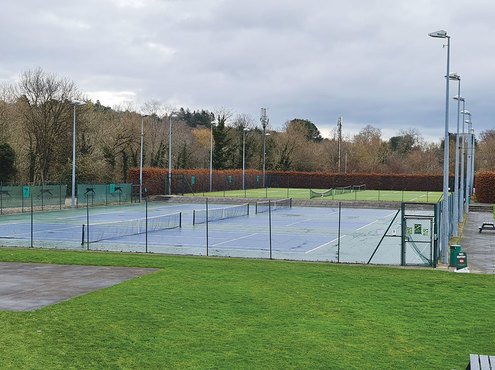 Richard and his assistant, William Rigg, are responsible for carrying out the seasonal maintenance of the grass courts. "In the playing season, which starts in early May, we will cut at a height off 8mm using a combination of a Toro Greensmaster triple and a Dennis G860. For the tournament, when we have more staff, we will use the Toro hand mowers, which we purchased from Wimbledon when they went to the battery powered Infinicut mowers. After the floods in November, I set the Dennis to 16mm. I tend to find with the Dennis, being a heavier machine, it cuts about a millimetre and a half lower, so we try and keep them between 14-15mm over the winter."

"We will aerate at the end of the season using our SISIS slitter, rather than throughout, purely for the fact that the players need the bounce. We do really need to start looking at using more of a solid tine rather that the slitter which we have had for a long time."

"A light scarification is carried out just before the start of the season to tidy them up. Then, during the season, we will give the courts a light verti-cut once a month, using the Dennis G860's verti-cut cassette, to keep the surface clean."

Renovations take place on all courts in August, but this can stretch into September depending on when the club end their season. "We generally do our renovations in-house, hiring in machinery as required. This year, I opted for the SISIS Rotorake TM1000 dethatcher, along with a tractor to power it. We scarified three ways using the Rotorake, followed by the slitter. We then overseeded using the Charterhouse disc-seeder this year, where previously we would have used a dimple seeder. I was very impressed with the results. I think, if we would have used a dimple seeder, we would not have been able to topdress straightaway and we would not have had the growth results we had. We use a seed mixture of ryegrass and fescue as I find the rye on its own needs too much nutrient to look after it and, with the conditions up here, it can be a bit patchy; we do not generally get southern temperatures. The fescue just helps fill it in and there's always been a mixture of the two in the past, and it works well."

The STRI advise Richard on his fertiliser programme and recommendations for the grass courts. "I try and stick to what rates and inputs they give me. I trust our sales representative Paul Emmanuel to offer me the right advice as he was once a groundsman. It is also a matter of working around the weather when it rains, or we get a flood; the nutrients just fly through the profile. A long time ago, we used to use a lot of liquid sprays, but we have gone more towards granular feeds with a liquid spray only in spring and summer. This seems to last longer and give us better results, especially with slow-release technology available to us all now."

With the national lockdown due to end on the 2nd December, Richard and the rest of the club's staff were getting ready to re-open. I asked him how the pandemic had affected him and if he had been able to get on with the job. "I have not been furloughed at any stage, but Will was from the first lockdown in March to when he came back in August. Apparently, he was more worried about me as, if he caught it and passed it on to me, it would have killed me. He obviously thinks I am older than I am!"

"Whilst Will was on furlough, I had some help from one of the tennis coaches, who used to be on the groundstaff many years ago; he came down and helped from 10.00am until 3.00pm each day, so I wasn't on my own. I will be honest; it was nice to not have the members around for eight weeks; it made it easier to get some jobs out of the way. I have not really been affected by COVID-19 personally as I have still been able to come in and work and my job hasn't changed at all, but I'm aware that I have been one of the lucky ones."

Richard went into landscaping straight from school as he did not want to work in an office. "I wanted to work outside and prefer manual work. I was not fond of going to school; it was the time when all the teachers strikes were going on. So, this meant no sports activities after school and no team sports, so school just was not enjoyable. I ended up doing a Certificate of Pre-Vocational Education, which was a course for people who did not know what they wanted to do. Halfway through that, I got an offer to become a landscaper with my girlfriend's uncle. I did that for four and a half years, until I was made redundant. I spent a year on the dole, then did some labouring until a job came up here as an assistant. I stayed for seven and a half years before setting up a landscaping business with my friend, which I did for five years. Then the phone call came asking if I would come back here as a groundsman again. That was in 2007. So, I have been back here thirteen years, with six years as head groundsman. 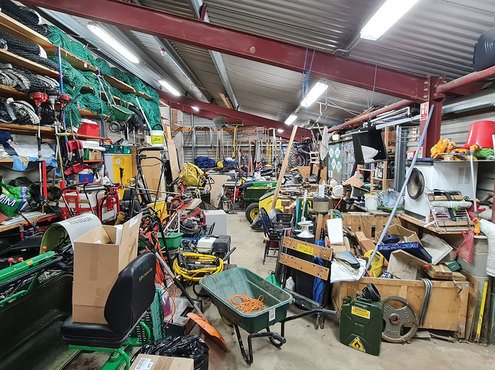 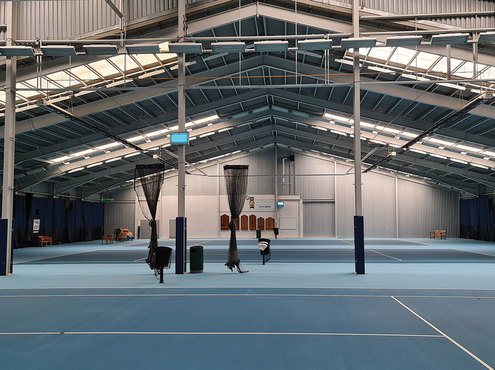