The inherent poor drainage characteristics had left the ground susceptible to water logging, and despite the introduction of a number of traditional piped drainage systems over the years, little benefit had been derived to the drainage of the outfield.

A sand rootzone profile was designed by the STRI to maximise drainage performance and provide flexibility for future development. A system of piped drains was installed beneath the outfield, together with a comprehensive, automated pop-up irrigation system complete with a state of the art weather station.

The upper layer of rootzone was reinforced with fibres using Fibresand, and a custom grown fibre turf was laid on the prepared surface measuring some 18500m².

The reconstruction of the outfield commenced on the 2nd September 2002, when the fixture commitments for Lord's were duly completed. The limitations placed upon the scheme were largely weather related with further significant difficulties associated

The cricket square itself was sacrosanct and had to be left intact and protected. The famous Lord's slope across the ground was to be retained, but all other undulations and variations were to be removed during reconstruction.

The project was completed by Christmas 2002, inside the contract period, and the first game played on the 26th April 2003.

The Principal Award (likened to the best of breed at Crufts) has been awarded to the Main Contractor, Mallinsons, who continue to produce workmanship of the highest quality.

The first steps of the reconstruction of the outfield included the removal of the existing turf, then the topsoil, followed by the subsoil. All the existing outfield drainage was also removed from site.

The topsoil and subsoil took substantially longer to remove using large excavators, the whole process taking just short of a month. The excavation reached half a metre in depth, with nearly 16,000 tonnes of topsoil and subsoil being removed. In layman's terms the excavated material removal involved about 800 lorries.

The movement of such quantities of materials both incoming and outgoing required considerable planning and organisation, particularly as there was only one point of entrance and exit to the site. The East Gate on St. Johns Wood Road was the only point of access, and because of the narrowness of the gateway, it was decided to remove the large iron gates for the duration of the contract, before they could have been damaged.

Mallinsons also decided to protect themselves from the vagaries of the weather by hiring temporary roadway panels, partly to construct a roadway under the famous 'Media Pod' out onto the outfield area, and also to create a holding area on the nursery ground for the many vehicles needed during the term of the contract.

All through the excavations the famous square was left intact, fenced off to stop unwanted debris and foot traffic.

A PC control system was provided and comprised of a central computer / decoder system. A weather station was installed, providing relative data on temperature, wind speed, wind direction, relative humidity, solar radiation, barometric pressure and precipitation, to the site and to the ground surfaces via the selected controller.

The drainage consisted of a twin wall main drain and lateral drains, installed at 7metre centres at falls of no less than 1 in 200. Nearly 3000 linear metres of drainage pipes were installed in total. 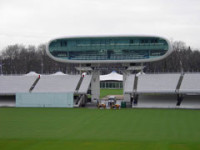 A layer of Terram (a semi-permeable membrane), was laid, which allows free movement of water, but stops the gravel migrating up and the rootzone from moving down and contaminating the gravel. The rootzone was then spread and graded in similar fashion, approximately 8000 tonnes of sand/ soil. 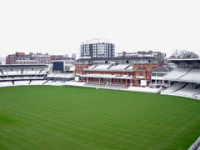 Into the layer of rootzone, a 25mm layer of concentrated fibresand was ameliorated to provide the long term stability and strength required of the playing surface.

Once the final levels were finished off to the satisfaction of the Mallinson staff, the 18,500 square metres of turf was supplied and laid. This turf had been specifically grown in the same fibre reinforced rootzone as was used in the outfield construction and will have helped the turf to knit in well with the underlying medium. It took approximately twenty days for the new turf to be laid at the ground.