by External source
in Industry News
on 16 Mar 2013 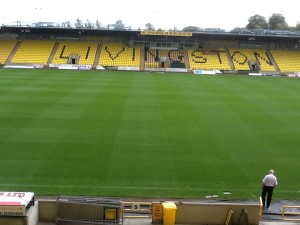 A new pitch at a Scottish First Division football club has been attracting a growing army of fans over the past few months due to the quality of the playing surface.

Management and playing staff at Livingston FC have been delighted with the pitch, and now visiting teams are also singing its praises.

Now, senior league officials have also joined the list of admirers, with the West Lothian club's City Stadium ground being selected as a neutral venue for a number of cup finals and other important matches as the season reaches its climax.

The current pitch was planted at the start of June last year, using Barenbrug's BAR 7 RPR.

Contractor Greentech (Sportsturf) Ltd was called in by head groundsman Stuart Speirs at the end of May to remove the thatch layer from the old pitch, harrow out the old roots, spread 300-tonnes of fresh sand and then use laser-controlled technology to level out the playing surface before seeding with BAR 7 RPR, Barenbrug's premier football pitch product.

Stuart said: "We opted for BAR 7 RPR as we had heard it performed well at other Scottish clubs and I had used BAR 7 for my summer renovation and liked the result."

Once seeded, the ground was covered with germination sheets and within seven weeks, the first matches were being played on the new pitch. 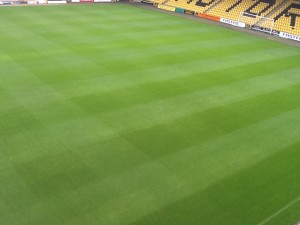 "The results are much better than I expected and the pitch has not cut up at all, even at this stage of the season," said Stuart. "With BAR 7 RPR, if we get a scuff or a cut it just fills back by itself in time for the next home game.

"We have had a lot of rain and cold temperatures but the pitch has been great and the playing staff and management have been really happy with the way it has played this season.

"We have cup finals being held here in April and that is because people have seen the high standard of the pitch.

"BAR 7 RPR is the best mixture I have used and when visiting teams comment on how good the pitch has played, that is a real compliment."

Greentech director Tom Brannan has also been delighted with how BAR 7 RPR has performed on the new Livingston pitch.

"The results have been excellent," he said. "Even in the later stages of the season the pitch is 95% grass covered, there are no bare areas and it just seems to re-establish itself and fill in by itself.

"That is extremely satisfying to see and without a doubt BAR 7 RPR is the grass mixture we will be using for such jobs in the future. The quality of the grass and what it does for the pitch leads to a highly-satisfying result all round."