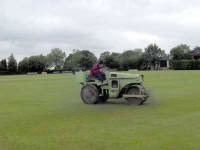 Pre-season rolling is for many cricket groundsmen, one of the most important and challenging processes used in the preparation of hard, fast, and bouncy cricket wickets. However, there are no set rules or guidelines for the process and if not understood it can have severe consequences. This article is an attempt to describe some of the main points about pre-season rolling and some of the theory behind it. To begin with, I'll be a looking at the frequency and intensity of rolling then the weight/ footprint of pre-season rolling.

Perhaps the best and possibly the most contentious question to answer about pre-season rolling is: "When do I start?" In my experience the best time to start pre-season rolling is when there is a period of sustained spring growth. This is because on a typical soil during winter, soil moisture is maintained at, or near field capacity, which is when soil conditions are ideal.

Although excess rainfall / water is removed by gravity (gravitational water) there is insufficient uptake by dormant grass roots to extract significant amounts of water held in the soil (capillary water) until there is growth. As the turfgrass begins to grow it removes the capillary water from the soil to the extent of its roots, taking the rootzone from field capacity towards wilting point, thus drying the soil. This creates air spaces within the soil profile that can subsequently be consolidated; water cannot be consolidated! 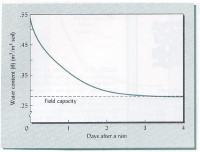 The water content of a soil drops quite rapidly by drainage following a period of saturation by rain or irrigation. After two or three days the rate of water movement out of the soil is quite slow and the soil is said to be at Field capacity. (Brady & Weil 2002.)

Therefore initial pre-season rolling is only necessary when there is growth. If the weather turns cold again, there is less water extraction (transpiration) and therefore less need to roll. The frequency or intensity of rolling should reflect plant growth until the wicket is sufficiently consolidated.

If it rains during the pre-season it's worth considering that the rate at which water moves through the soil, the hydraulic conductivity, is lower on heavy clay soils such as those used for cricket wickets. Therefore during periods of rainfall the moisture content of the wicket lower down is less affected as most of the rain will become surface run off.

Soil moisture levels can be classed as either extremely wet, extremely dry or somewhere in between, the middle point being field capacity. Soil strength is similar as it also has two extremes - elastic (hard) and plastic (soft). The middle point of soil strength is also at field capacity and at this point there are an equal number of pore spaces filled with water as there are filled with air (air-filled porosity).

The significance of field capacity on soil strength is that the greatest amount of consolidation can only take place when there's sufficient lubricant (water) and soil pores (air spaces) within the soil. As the moisture level moves from field capacity to wilting point, so the efficiency of consolidation is gradually diminished. To compensate for this, a heavier roller can be employed to increase efficiency and therefore its effects.

The diameter-to-weight ratio of rollers also plays a major part in the consolidation process. Basically, the greater the diameter and the lighter the roller the less chance of creating a steep bow wave. It is worth mentioning that a bow wave is always created when rolling but in the majority of cases not steep enough to cause any damage to the wicket profile. Steep bow waves do however cause damage, caused by using too heavy a roller with too small a diameter (a pedestrian trailed mower seat maybe!) This damage generally includes:

This is caused when the bow wave is steep enough to follow the roller from one end of the wicket to the other, causing the delicate roots to shear at a consistent point below the surface of the wicket, usually within the 4" (100mm) of wicket soil needed for good bounce and pace. What will dry the wicket now?

Root shear will cause the wickets, despite a lot of effort, to become very hard on top but behave slow and low. This is because the wicket is still wet underneath thereby absorbing the ball's energy. Evaporation rates (the sun drying the soil directly) in the UK can generally only dry a soil out to a depth of 1" (25mm). It is the loss of water due to the processes of transpiration through the roots of grasses as well as the effects of evaporation (evapotransporation) that dry wickets to depth, creating harder and faster wickets.

This is caused when the roller used is too heavy with too small a diameter for the soil moisture conditions involved. The bow wave created then becomes so steep that it is driven over by the roller, which then goes on to create another bow wave until, it too is too big for the roller to push and is then also ridden over. This causes the surface of the wicket to become very uneven, and there is little chance of an immediate remedy: usually years of judicious topdressing or using a machine such as the Koro Fieldtopmaker.

It is advocated that wickets should be rolled in many different directions during pre-season rolling to cause equal consolidation, but also to reduce the effects (if any) of surface rucking. It's also advised not to roll stump to stump too early for the same reason.

At field capacity the efficiency of consolidation is at its maximum.

Wicket soils will remain at or near field capacity during the pre-season until grass growth increases the rate of transpiration, therefore drying the wicket. At which point pre-season rolling should commence.

As the turfgrass growth rate increases so does the rate of wicket drying and the efficiency of rolling diminishes.

Weight-to-diameter considerations must be made on rollers to ensure that no steep bow waves are created on wickets. Careful consideration should also be given to rollers that have additional weights added, as this may also cause wicket damage.

Choosing the correct roller for the correct soil conditions, when to start, and how much rolling should be done is of course an individual matter and personal preference, but I hope that this article has outlined some of the basic principles for those who are not so familiar with the technique.