0 Rabbits and the Law 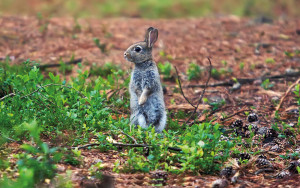 Despite their 'cute' reputation, rabbits are a major pest species in the UK. This non-native nuisance is underestimated by most, but their capacity to breed as well as chew, munch, eat and dig through most terrain is unchallenged.

Here are a few simple facts:
Seven rabbits will eat as much as one sheep, so even a small population of rabbits can decimate an area very quickly. It is estimated that rabbits cost the British agricultural industry £100million a year through crop damage.

Sports grounds and public areas are much favoured habitats for rabbits. The most likely reason for the need for rabbits to be controlled in such places is mainly due to digging. As rabbits continue to dig scrapes and burrows, the chance of a member of the public falling and injuring themselves is increased, which could potentially result in a lawsuit against the landowners or managers.

Cricket squares seem to be irresistible to them and, overnight, can become unplayable. They will also cause damage to equipment such as football and cricket nets, as well as posing a fire risk by chewing through electricity cables, especially if they choose to take up residence under the clubhouse.

In conservation areas, rabbits will eat a variety of plants - and they don't differentiate between the common and the rare, which can affect the very existence of certain plants. They graze systematically from their burrows outwards, which results in loss of habitat for insects and small mammals. This, in turn, can have an affect on birds of prey hunting grounds.

Their burrowing can cause subsidence and erosion, whilst trees and shrubs get ring barked and die!

Your responsibility to control rabbit numbers

You must obey the law to control rabbit numbers on your property or land. England (excluding the City of London and Isles of Scilly) was declared a rabbit clearance area under the Pests Act 1954.

You must control rabbits on your land in this area. If this is not possible, you must stop them causing damage to adjoining crops by putting up rabbit proof fencing. If you don't take action, the Secretary of State for the Environment can enforce control and prosecute if this action is not taken.

You can control rabbits by:

1. Control with gas
You should use someone trained in the use of gassing products if you choose this method of control. See the HSE information sheet 'gassing of rabbits and vertebrate pests' for more information. 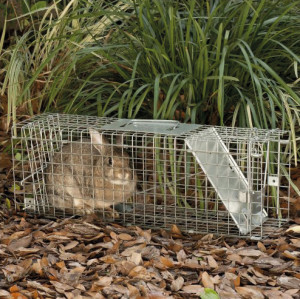 2. Catch with traps and snares
It is an offence to cause unnecessary suffering to a rabbit caught in a trap or snare.

You can use cage traps, drop box traps or spring traps, but you must:
- check traps and snares once a day
- humanely despatch any rabbits you catch
- only use approved spring traps

You must not:
- place them where they will be exposed to severe weather
- place them near a fox earth or badger sett
- use self-locking snares

Fencing restrictions:
- You need Secretary of State agreement to put up fencing on Scheduled Monuments
- You should not put up fencing on archaeological sites
- Some wildlife habitats and species depend on rabbit grazing, so you should consider wildlife interests when deciding where to put up rabbit fencing
- You should install badger gates if the fence crosses any badger runs 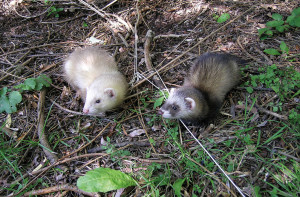 4. Use ferrets
You can send ferrets into the burrow system. The ferrets drive rabbits into nets, which are placed over the burrow entrances or to waiting guns that shoot them as they bolt from tunnel entrances.

5. When you can shoot rabbits
If you are the occupier of land, you can shoot rabbits on your land during the day and can authorise, in writing, one other person to do so. That person must be part of your household, one of your staff or be employed for reward to specifically control the rabbits.

If the owner of the shooting rights for your land does not agree to destroy the rabbits themselves, nor allow you to use extra shooters, you can apply to Natural England for authority to do so.

Make a complaint about rabbit damage
If you are suffering damage from rabbits coming from neighbouring land, you should contact the landowner concerned first, to agree how to resolve the issue.

If your neighbour fails to control them, you can make a complaint to Natural England.

If rabbits live on land owned by Network Rail, you should telephone Network Rail national helpline 03457 11 41 41.