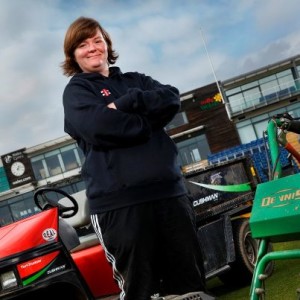 A Myerscough College student has become the first female member of groundstaff at an international cricket ground after landing a dream job at Glamorgan's Swalec Stadium in Cardiff.

Sarah Addison graduated from Myerscough with a Foundation Degree in Sportsturf three years ago. Here she acquired all of the necessary skills to build, maintain and manage surfaces to high specification standards and gained a detailed understanding of the demands of sport and what players expect from turf surfaces.

In an almost entirely male dominated industry, she'll now play a major role in preparing wickets for six forthcoming international fixtures at the stadium. This includes several ICC Champions Trophy games and England's One Day International matches against New Zealand, as well as the highly anticipated battle with Australia.

The 27-year-old has made the move to Wales after a spell at New Road, the home of Worcestershire County Cricket Club and says she can't wait an exciting few months ahead.

Sarah commented: ''I'm confident that I can handle the step up to maintaining an international pitch. The job is the next level up from country cricket and I know I'll have to work a lot harder to prove that I can do the job. I don't mind the hours, or getting dirty.''

Sarah has already had a taste of what it's like to work on an international cricketing arena. Last year she spent some time working at Edgbaston, helping to prepare the ground for the England v South Africa 20/20 encounter.

Sarah says: "I really enjoyed the experience and time I spent there and that has given me the taste to work on international grounds. I'd love to see more women involved in this profession and it would be great if my role here could encourage more females to be involved in cricket.''