0 Spring clean at the Priory 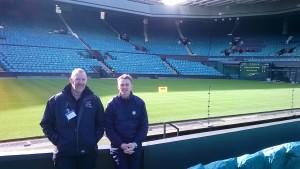 The Grounds Team at the Edgbaston Priory Club, led by Grounds Manager David Lawrence, and Assistant Grounds Manager John Lawrence, have spent the winter jumping from project to project, proving that the job of a modern day Groundsperson is no longer just a seasonal affair!

With five different playing surfaces at the club, as well as landscaping projects to complete and building works to co-ordinate, all whilst planning ahead for the club's showpiece event, the Aegon Classic Birmingham, the team have certainly had their hands full. However, with spring finally seeming to have arrived, the team is beginning to turn their attention more towards the clubs eight championship standard grass courts, as the tennis season begins approaching with pace.

March began for us (David and John) with a trip to Wimbledon to spend a day with Head Groundsman Neil Stubley, giving us an opportunity to see 'where the bar would be set' for this year. As always the grounds and courts were immaculate, and we are very grateful to Neil and Wimbledon for their hospitality.

We feel these visits are extremely important for us as a venue, as we see The All England Club as the benchmark for everything we do. There can only be one home of grass court tennis, and it's up to us to produce courts that allow the players at our event to get the best possible preparation for playing on the courts there. This is reflected in our court testing programme, where we try and create identical playing characteristics on our courts to those down at Wimbledon, and again shows why having such a strong working relationship with Neil and his team is so valuable to us. 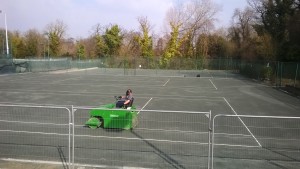 Whilst Wimbledon certainly left us inspired to get started on the grass courts here at Edgbaston Priory, the early part of the month was largely dedicated to other projects, as the weather was still not quite favourable enough to accommodate any significant works. A large chunk of our time was taken up preparing the clubs four American Clay courts for the season ahead.

Whilst the majority of the renovation works for these is completed over the winter months, the finishing touches can't be applied until we are clear of frosts and the accompanying ground movement that comes with it. Once the worst of the frosts had passed we were able to apply dressing in areas which needed any additional topping up, and then commence rolling. Each court receives around eight passes over, to achieve the required compaction, and also to help ameliorate new dressing into the profile.

Once this is complete lines are then reset, drains cleared and backdrop screens erected, before nets and posts can go up and play can start. We open courts as they are complete, rather than waiting until all are complete to open all at once, so as to give our members as much chance as possible to get on to the courts through the season.

As well as the clay court renovations to complete, we've also had the distraction of overseeing a major building project. As a club we are lucky to be having two new artificial grass courts installed in the centre of our site. Whilst the time-scales for this are extremely complex, due to the pre-tournament build phase for the Aegon Classic, it is also inconvenient in that the works are taking place right in the centre of the site.

This has meant we have had to close the main walkway through the centre of the site, and build a new, temporary path as a diversion around the works. To do this we first levelled the ground as best we could with old top-dressing, then laid a plastic underliner, boarded down each side of the walkway and then back-filled with decorative wood chippings. 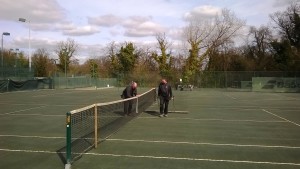 Finally, this was rolled to compact down. The finished result means that we are able to give full access around the building site, whilst ensuring the safety of our members when passing through the area. This installation hopefully means that the construction team can now be left to press on with their work, as they have short deadlines to meet, in order for the area to be ready to be handed back to us prior to the Aegon Birmingham Classic.

Even on wet days, we still have plenty of pre-tournament work to complete. For example, this year we are working on getting walls re-painted in our centre court. Unfortunately the weather has gotten the better of a lot of the paint, so this has to be removed by pressure washing - whilst trying not to get the court wet! Once this has been done and the walls have had sufficient time to dry, we can then set about getting the walls re-primed and eventually painted and looking back to their best.

At the same time we have been tying in the opportunity to pressure wash and clean stands and seating. For much for the year the stands sit in shade, and with very little foot traffic, dirt accumulates quickly. This has to be gone well in advance of the TV cameras turning up in the summer, but is obviously a huge undertaking due to the size of the area needing treating! 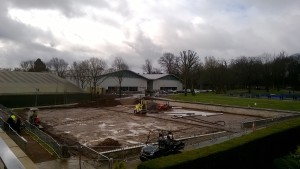 Moving back towards the grass courts, we were fortunate at the start of the month to receive our new mowers; two Dennis FT610's. We had already purchased one of the machines last year to try out and see how well it suited us, and the results were obviously good given that we've opted to get two more, taking the size of our fleet up to three.

Whilst we have the obvious mowing cylinder cassettes for each machine, we have also acquired a verti-cutting reel, multi-dense brush cassette and also have a sorrel roller reel on our shopping list! We firmly believe that these machines give us a fantastic quality of cut, whilst also allowing us the versatility to be adaptive in our approach to maintaining our eight grass championship courts.

It's also worth saying that the machine we purchased last year also came back from its winter service at the start of the month. We're very lucky to have a great relationship with Simon Holland and his team at Arb and Grounds Equipment based in Derby, and even luckier that the quality of their work is of the highest standard. It's fair to say our older FT610 had gotten a fair bit of use last year, due to it being the only one we had, however, it came back from its service looking virtually identical to the two new machines. One of the most important aspects of looking after the courts is having access to fantastic machines, and knowing that they are in good working in order. We can certainly relax knowing that Simon and his team give us that quality assurance with every job they do! 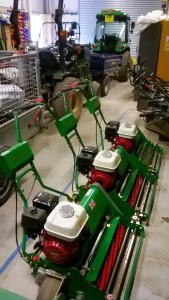 Of course having access to our new machines left us chomping at the bit to get out and start work on the grass courts. Fortunately as March went on the weather eased and we've been able to really get our teeth into some good spring work. Through winter we've been able to keep the courts at 13mm, and have continued to maintain this through March.

In mid-March temperatures had improved enough to allow us to apply a nitrogen based liquid feed to try and stimulate some spring growth, and as temperatures have continued to improve we've also managed to get on and verti-cut all eight courts, before giving them a cut with a cylinder to clear out anything that had been 'groomed up.

Brushing has then been completed to remove any weak growth and detritus from around the base of the sward, all of this being completed with our Dennis FT610's. Once the courts were all brushed they have then been over-seeded using a Blec Pedestrian Dimple Seeder and Limagrain's MM50 Ryegrass Seed mix. Seeding was targeted to areas that particularly needed it, meaning predominantly high wear areas, such as baselines, and where line officials and ball kids stand during the tournament.

We were lucky to have had a good autumn renovation and a strong grass sward coming in to the spring, meaning full court over-seeding hasn't been necessary for every court. Finally courts were dressed, again focussing on high wear areas. This has just been a light dressing to give the seed some cover and a chance to germinate, rather than anything heavy to correct levels, which again were addressed in the autumn.

To complete these works all courts were drag matted to ensure seed and dressing were well mixed, leaving us with our fingers crossed that the weather continues to improve so that we get plenty of new seed germinating and some strong growth!

Hopefully March has literally allowed us to plant the seed for the foundation of a good grass court season this year, and April will ideally be an opportunity to press forward and ensure that is the case. Whilst April can be unpredictable in terms of weather, the grass courts will become more and more a part of our focus as we get closer to the Aegon Birmingham Classic and the grass court season. 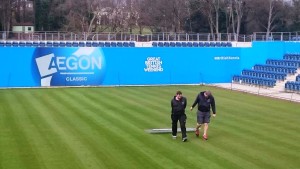 Mowing frequencies will almost certainly increase, and the nutrient input will have to reflect this. We have already got in stock the granular and liquid feeds we plan to use over the next month or so, and these will be applied in due course. While April will undoubtedly bring rain, we are also getting to the point where we can start to 'play God' with the weather, as we have our court covers installed on the 9th of April.

Whilst it is hard work moving covers on and off with such a small team, it is a necessary evil to ensure we can begin the drying out process required to get the courts in to tournament shape. Depending on the weather we could also begin to have people staying on site overnight to monitor inflatable covers if the weather goes against us.

Final planning meetings will also take place this month involving the Lawn Tennis Association and their contractors, to confirm arrangements for the Aegon Classic Birmingham, so that we know what is going on from the TV Coverage to the construction of temporary stands and marquee's. Of course all of this has to be balanced with ensuring the continued continuity of the quality of our day to day service to members, meaning that the next few months are sure to be extremely busy and very challenging - though that's what makes this job great - it's always interesting!