0 The school on the hill at Farnborough

Farnborough Hill's setting is certainly unique. The main house, which has an illustrious past, is set in sixty-five acres of grounds that include secluded gardens and woodland. Situated on the highest point in Hampshire, it has marvellous views over the surrounding countryside.

Thomas Longman, the publisher, began building the house in 1860, however, Farnborough Hill's most famous resident was the exiled Empress Eugénie, widow of Emperor Napoleon III of France, who lived there from 1880 until her death in 1920.

The history of the school itself began in 1889 when The Institute of Christian Education established a convent school. They purchased the

house in 1927 and commissioned Adrian Gilbert Scott to design additional school buildings, which included the stunning school chapel. Over the years, there has been further expansion, all of it in keeping with this Grade One listed building. In 1994, The Institute of Christian Education transferred ownership to The Farnborough Hill Trust and the school is now under lay management.

The picturesque and historic surroundings give the school a firm sense of identity, providing a safe and stable environment where girls experience a happy atmosphere of friendship and support.

Head Groundsman, Dave Bell, and his two man team of Nick Tunnicliffe and Simon Green, have a busy job keeping on top of the maintenance of everything on site which includes sports facilities for hockey, football, rounders, athletics, tennis - hard and grass courts - and, new this year, cricket. In addition, there are ten acres of formal gardens, a mile of perimeter woodland, rhododendron lined paths and a mass of meadowland.

Included in the budget for the grounds is everything from tree work to fertiliser, and maintenance of all the kit to tarmac for road repairs. "It's a delicate balance to decide where to invest in the grounds and the kit, and also what level of usage warrants a bigger outlay," explains Dave.

The team, which includes an extra summer worker, need to be ready for anything. For example, this year, they have been busy building new hockey backboards, laying re-enforcement mesh in the car park, and monitoring the numbers of Canada geese, which are eventually controlled by a contract falconer!

Things were somewhat different seven and a half years ago when Dave (32) was appointed as Head Groundsman. The grounds team operated out of an old stable block in a tea room/workshop. Dave says; "When I first arrived, there was no plan, documents or evidence of any long term pattern of work but, with a supportive Bursar trusting my professional judgement, I set out on a rough ten year plan to modernise, professionalise and transform the school grounds and operations."

Staffing is key to any business and particularly to a small team with a large variety of demands on them. Training is available for all staff, which usually starts with chainsaw and spraying certificates. Over the years, staff have gained Level 2 Horticulture, Level 3, Tree Inspection, various industry short courses and also training through Pitchcare; latterly the Supervisory Essentials courses, led by Frank Newberry, which Dave describes as "the best workplace training I have had for many years."

In the coming year, Nick is hoping to go on a machinery maintenance course with Pitchcare, Simon to do Tree Inspection at Merrist Wood, and Dave hopes to complete the advanced part of the winter pitches and cricket suites. Alongside professional training all the team recognise that much of what they do as groundsmen comes from on the job learning. Dave has worked in the private school sector (Pangbourne & Oratory) since 2000 as well as two years self employed as a gardener in Reading. Simon has worked with council contractors, and Nick has experience of schools and gardens so, between them, they hope to have all the bases covered.

It's been a building process at Farnborough Hill, starting with two bags of fertiliser per pitch in 2006, the grounds team now operate year round maintenance of all their sports and amenity turf, involving annual spraying for weeds and moss, plus an additional granular feed in September and April. Scarifying takes place twice yearly and seeding annually so, from none in 2006, the grounds now use 100 bags of fertiliser, 35 bags of seed, and gallons of chemical to keep their pitches in tip top condition. "It was a bit 'chicken and egg' when I arrived. The pitches were extremely poor, but did their use warrant more work and expenditure? Well, we began first by building our maintenance programme, and the improvement in the surfaces has resulted in a quadrupling of the matches played here, more athletics meetings and, new to us here but played on this historic estate 100 years ago, cricket."

Another area which has seen major transformation is the formal gardens. During the past eight years all the borders and beds have been replanted, bedding introduced, and collections of Cannas, Fuchsias and Hydrangeas built up. The same work has been carried out on the lawns as on the pitches and the stunning gardens now create the perfect setting for the 'Friends' annual garden party in June, along with many other school functions. 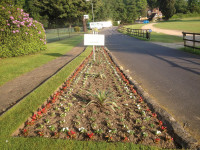 Each year, the summer and winter bedding is ordered and a creative flair sought amongst the team for ideas. In 2012 it was an Olympic theme, using the colours of the Olympic flag in the five circular beds on the main lawn. They also created a new 'Jubilee Border' in honour of the Queen's Diamond Jubilee. This year, with a new supplier, the bedding is stunning again in orange and purple - like many gardeners moving away from the red, white, and blue.

The team plant around 2,000 bedding plants twice each year and, interestingly, the bulbs beside the drive are planted in groups of fifty in bread crates wrapped in wire mesh to protect them from the local wildlife!

The school regularly enter their local competition 'Rushmoor in Bloom' and, in 2011, took Silver Gilt in the Best Commercial Garden category.

Last September, they went one better, winning Gold and again Best Commercial Garden. The award is on display in the school and, whilst the team were hoping to bring home the prize again this September, they were awarded a silver. There are numerous other ways of judging success; the team receive regular cards, gifts, and comments from those associated with the school. Dave also uses PQS to monitor the condition of a range of turf areas, and again has seen consistent improvement during his tenure.

Everything in the grounds here has its place and time. Dave's methodical approach, working to a nominal ten year plan, means that some tasks are extremely regular. For example, every summer the rhododendron hedges are cut, which takes most of July, and then, in August every year, the team complete ten to fifteen panels of featheredge fencing on the perimeter. "We have been steadily replacing all the old and broken panels along the perimeter road, and now have just nine left for next year, before we start again!" This approach to planning the work pervades every area, with Dave producing an informal report annually, detailing the work done over the last year. It contains reports on the gardens, sportsturf, machinery and a financial breakdown, and goes on to set targets for the coming year. "We aim to spend twenty days during the winter working in the woods as a team but, in three years of trying, we haven't managed it yet!"

A maintenance book contains a schedule of repairs and servicing to be carried out through the year by the team, who all confess to being amateurs, but more than competent, mechanics.

Trees are a major part of the landscape. The view from the top of the hill is like a typical Capability Brown creation, but has developed naturally over centuries, and includes fine specimen firs, sweet chestnuts and oaks, along with a mass of self seeded ash and other varieties.

The school is surrounded on three sides by roads, including the busy A325 Farnborough Road, so maintenance of larger trees is carried out by a qualified tree surgeon (Toptrees). Smaller limbs and ground work is carried out by the grounds team. Currently, they are working along the perimeter clearing scrub, holly and laurel to open up the woodland. This work had been neglected for a long time so the team are really catching up for lost time.

The cost is high as there can be no shortcuts with this work. Over recent years, Dave has surveyed over 500 trees of all sizes and plotted them on tree plans in areas of approximately 30m x15m. The aim is to eventually have all the trees on site mapped and then to have undertaken clearance and maintenance on the entire perimeter.

The grounds department moved to a modern wooden building five years ago which provides a large garage area, a separate workshop (read games room!) and a comfortable tea room/office. It's a thoroughly professional set up which shows the best of the young groundsmen and their abilities.

Even though it sounds busy, the team managed to hold a 'Grounds Olympics' during last year's holidays, competing between themselves in various sports from croquet to golf to pool. Also, in their downtime, they can be seen hacking through the meadow o n their own 'round of golf'.

Aside from planning, the team have a passion for getting out and working in the grounds. Each member has his own area of responsibility, but the team then work together, blowing the drives, doing tree work, marking out pitches, and on other special projects.

Every school has its share of building work and, this year at Farnborough Hill, construction of a new Music Suite is underway, which is due for completion in November. The new building will look stunning when finished.

However, the only access route was through the gardens so, in February, groundworkers dug through the main lawn beside the school house and laid a road of crushed aggregate. This was then secured with Herras fencing and became the boundary of the grounds teams work. It means that, when the road is lifted and the ground is reinstated, Dave and his team will have a major project to see the area restored properly.

The grounds team, though disappointed with the mess, are looking positively upon the chance to have a new lawn with beds and borders and give the school's main lawn a major revamp, levelling with a Koro, straightening the edges, installing Everedge and re-shaping the centre beds.

This positive outlook sums up the attitude of the small team at Farnborough Hill. As any groundsman knows, the variety of jobs is huge, but the opportunities and passions are just as big, and here they are alive and well.